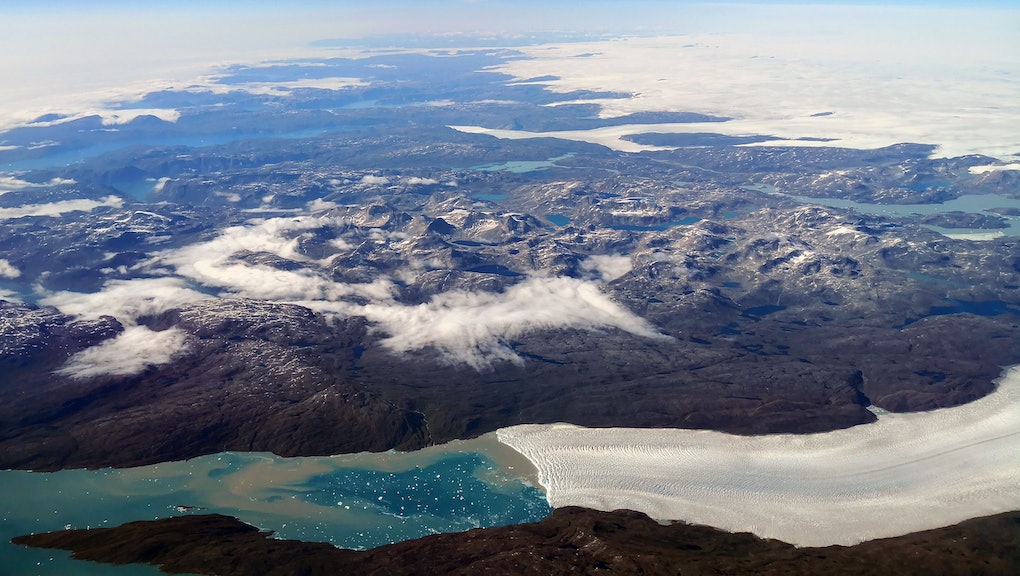 This summer's heatwaves have been hitting Europeans hard, breaking temperature records, and causing passengers in the Paris Metro to pass out from the heat. The heatwave then moved to Greenland, where researchers are reporting peak temperatures on Aug. 1 spurred a massive ice sheet melt with 12.5 billion tons of ice draining into the ocean within a single day. This enormous amount of water only adds to concerns about the threat of rising sea levels that occurs due to the accelerated effects of global warming.

The melt has turned the once-white landscape of fresh snow into a grey mass of ice. The grey comes from dust trapped within the ice, the Washington Post reports. The loss of the protective snow cover will expose the remaining ice to more sun rays and heat, which could cause further melting.

Pictures of the ice sheet show pristine, blue water rushing from the melt and turning into rivers along the ice sheet, carving out canals as it drains into the ocean below. Smithsonian Magazine stated that the amount of ice melted produced enough water to cover the entire state of Florida in nearly five inches of water.

Global warming has not been kind to Greenland. The New York Times noted that this much heat is unusual for the region, with the heat rising over 10 degrees more than normal, and the arctic ice has suffered for it. During the heatwave in July, an image emerged of a research team using sled dogs to mush through shallow water. The snow that usually covered the ice had melted, leaving water on top of the ice instead.

On Twitter, climate researcher Steffen M. Olsen warned about the effects of the loss of Arctic ice in the ocean, stating that people in the area will have to alter their lifestyles, and that research about the Arctic melt should be increased.

"Communities in #Greenland rely on the sea ice for transport, hunting and fishing," he wrote. "Extreme events, here flooding of the ice by abrupt onset of surface melt call for an [increased] predictive capacity in the Arctic[.]"

Smithsonian Magazine reported another large ice melt happening in the area one day before the Aug. 1 melt. During that time, the surface lost 10 billion tons of ice. So far, this year, the ice sheet has lost 248 billion tons.

Although Greenland's ice has encountered a large scale melting before, in 2012, researchers have taken notice that this melt is happening earlier than usual, with the heat reaching areas that don't typically see an increase in temperature like this. As a comparison, the ice sheet lost 250 billion tons of ice by the end of 2012. This year's melt has nearly reached that level with more time to spare.

Some of the Arctic ice will likely return in the fall as temperatures reach the freezing point again. But scientists are worried about how much will come back, how long it will stay, and whether some of the loss will be permanent.

And Greenland isn't the only place that's losing Arctic ice. Mashable reported that Alaska's sea ice has completely melted away, earlier than usual, as this summer has brought the northern state incredibly unusual temperatures that hit 90 degrees in July.

"I’m losing the ability to communicate the magnitude [of change]," said board director at the National Academies of Sciences, Jeremy Mathis, to Mashable. He was speechless while trying to describe the record-breaking loss of sea ice so early in the year. "I’m running out of adjectives to describe the scope of change we’re seeing."

The melting ice doesn't just mean a loss of habitat for wildlife, it can also be bad news for people living in coastal areas. The National Oceanic and Atmospheric Administration (NOAA) warns that coastal communities — which make up nearly 40 percent of the U.S. population — could be hit with more extreme storms and a loss of their shorelines due to the rising sea levels.

"Higher sea levels mean that deadly and destructive storm surges push farther inland than they once did, which also means more frequent nuisance flooding," warned the NOAA. "Disruptive and expensive, nuisance flooding is estimated to be from 300 percent to 900 percent more frequent within U.S. coastal communities than it was just 50 years ago," the agency noted in May this year.

Scientists say there's little reason to believe this summer's ice melt will have an immediate impact on global sea levels. But by 2100, Smithsonian reports, along with rising temperatures, Greenland's ice melt alone could contribute an additional 2 to 13 inches of water to current levels.