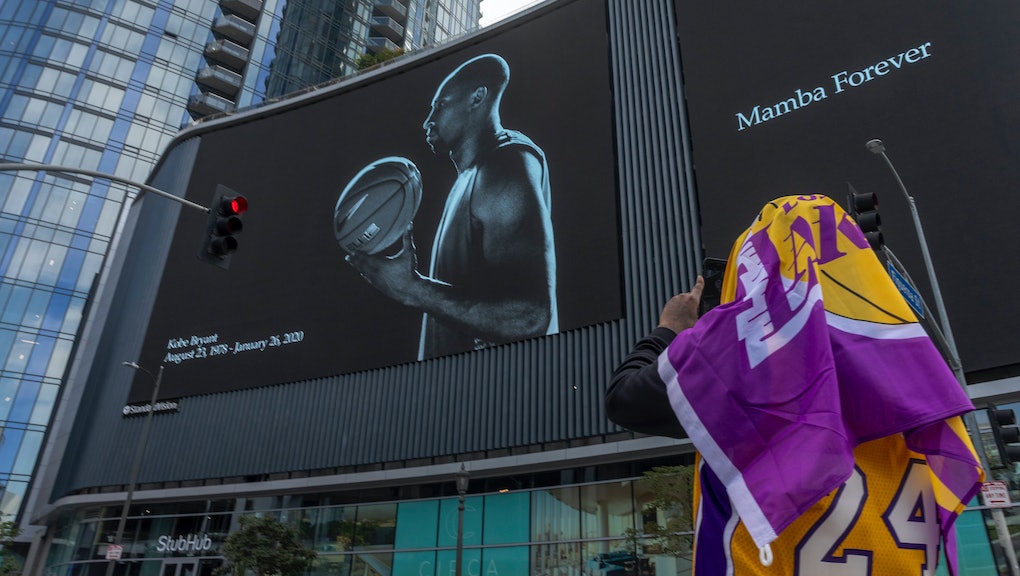 There’s something about grief that makes you feel a little bit foolish. Foolish for believing a terrible thing would not happen, foolish for forgetting how random and unjust the course of life can be. Foolish for feeling so devastated at all.

It’s the latter feeling that’s taken me over since I learned that Kobe Bryant had died, along with his 13-year-old daughter Gianna and seven more people in a helicopter crash on a foggy Sunday in Los Angeles. The aircraft went down about six miles from my childhood home, a light blue rancher where my mom and stepdad still live, which I worry about from afar every fall fire season. Inside my bedroom there, mostly intact in its teenage glory, you’ll find a mini basketball hoop tucked inside the door of my bookshelf, a purple-and-gold pennant from the Lakers’ 2009 championship run, and a whiteboard in the corner where I used to obsessively track every Laker game. If the closet door were open, you’d see a throwback Kobe jersey in Minneapolis blue, nestled among my own basketball jerseys from 4th grade through my senior year of high school. In the detritus of my decade-plus on the internet, you could unearth a MySpace profile picture in which I’m wearing a Lakers hat and gazing adolescently into the middle distance, countless Facebook statuses and frantic tweets about Kobe’s eye-popping plays and mounting injuries and epic farewell, a Slack room called #kimobe at an old job that was my place as a first-time editor to ask questions of my bosses.

But despite all these painfully personal ties to the man, a fact remains: I did not know him. I never met Kobe Bryant. Not when he was growing up in Italy or becoming a high school phenom in the Philadelphia suburbs; not during the week he was a Charlotte Hornet nor the 20 years he played for my beloved Lakers. I never met him while he was making his Oscar-winning animated short, Dear Basketball, and we never shook hands while he was crisscrossing the country to show his gifted young daughter the beauty of the game. I’ve never been to the Mamba Sports Academy in Newbury Park, California, to which he was reportedly traveling when his helicopter crashed. For the 27.5 years Kobe and I shared this planet, our paths never crossed.

So when I reflect on my grief — and it is real grief, all-consuming and malaise-inducing as these things tend to be — yes, I feel a little foolish. I think of his wife Vanessa, who has now lost not just a husband but also a child, and the remaining three daughters who will now live life without their father and sister. I think of the basketball-loving girls who’ve lost not just their coach, but also a tragically young teammate in Gianna. I think of the countless people whose lives Kobe personally touched, who were asked to speak their sadness on TV so that the rest of us could have stories and anecdotes to cling to as our own. And I wonder how I can dare to be so publicly sad.

Kobe wasn’t a perfect man; I’ve written about him and his complicated legacy before. He had the advantage of committing his major public transgression in 2003, before social media and a more aware generation could properly interrogate the accusation of rape leveled against him by a 19-year-old hotel worker in Colorado. In recent years, Kobe became a major advocate for women’s basketball; some women’s sports scribes have noted how he was far from a perfect symbol for the women’s game, even as Gianna was evidence of its bright future.

Honestly, I don’t have answers for that. Albert Burneko at Vice wrote about how facile it is that we refer to Bryant’s legacy as “complicated” — which I just did, in the paragraph directly before this one — when what we really mean is that he was credibly accused of rape. Rohan Nadkarni said at Sports Illustrated that things “will be messy” as we figure out how to memorialize Kobe, given how we failed to process his sins in 2003. Lindsay Gibbs wrote that while we can’t “ignore the tough parts of Bryant’s legacy,” it’s okay to give mourning fans space to grieve their imperfect hero.

At least a dozen people reached out to me yesterday, family and friends from every phase of life who knew I’d be affected by Kobe’s death. Three separate people, all Sixers fans with whom I’d exchanged playful trash-talk in the last week ahead of the Lakers’ game in Philadelphia on Saturday, texted to share their love. One of them told me she’d be a Lakers fan for one day, just for me.

I genuinely appreciated the messages. It was touching that friends wanted to support me when they knew I’d be hurting — and perversely validating that yes, I am a true no-bullshit Laker fan, I have been for two decades, and look how many people know it. It helped me feel the sense of ownership I realized I was desperate to feel, that it was okay for me to be so upset about this loss, even though I did not know the man at all. The recognition gave me space to be sad.

But in a way it was also burdensome. It made the news real, and it made it something I had to acknowledge. How do you explain that you burst into tears at the news of the death of someone you’d never met? How do you acknowledge a grief that goes much deeper than the relationship did?

The Lakers were set to return to Staples Center on Tuesday night after a week and a half away from Los Angeles, where they were supposed to face their crosstown rivals, the Los Angeles Clippers, in a game tailor-made for the city. But late Monday, the NBA announced that the game had been postponed out of respect for the Lakers organization, to give players and staff the space to mourn. NBA insider Shams Charania cited a source who said "these guys are not ready to play basketball right now," while longtime ESPN writer Ramona Shelburne reported that the Lakers spent Monday "with grief counselors."

Eventually, basketball will return to the House that Kobe Built. Teams will gather on the court beneath both of Kobe’s jerseys, which hang retired in the Staples Center’s rafters. There will be tributes and tears, some surely shed by me.

And then the ball will be up, and the game will continue, unbeaten but forever changed.

More like this
Watch GOP Gov. Jim Justice fully combust when asked why he signed a transphobic bill
By Rafi Schwartz
More damning proof Jake Paul is the worst
By Kara Weisenstein
The Olympics will punish athletes who protest racial injustice because we're stuck in the 1960s, apparently
By Kara Weisenstein
Stay up to date