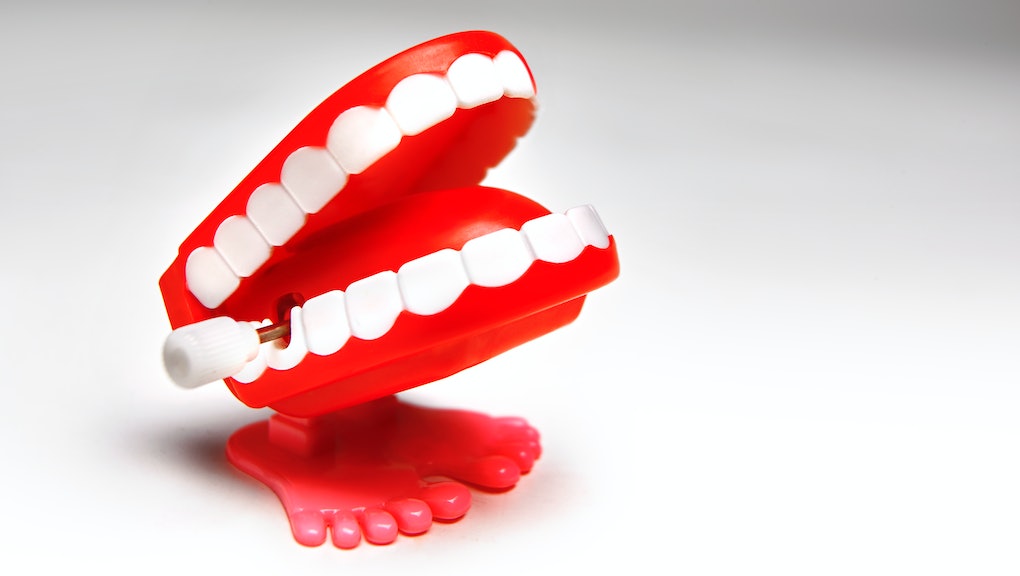 Grinding your teeth? Pandemic stress might be to blame

Lately, I’ve developed a habit of periodically stretching my mouth open. One perk of all this time spent at home is that I don’t need to worry about freaking anyone out with my creepy grimace. Then again, I might not even have adopted this weird habit if not for the pandemic. I stretch my mouth because my jaws are sore. My jaws are sore because I’ve been clenching them all day. I’ve been clenching them all day because I’m stressed — and who isn’t these days? It’s no surprise that so many others literally feel my pain. Pandemic stress is wrecking our jaws.

The pandemic has seen a rise in jaw muscle pain in the U.S., according to MarketWatch. David Bastacky, an instructor of otolaryngology at Johns Hopkins Medicine, has noticed a similar trend among his patients. “I always ask them how they’re coping with COVID, and has it added to the stress levels in their lives, and most of them will say, ‘Absolutely.'"

Stress is the main culprit behind what's called myofascial pain dysfunction, Bastacky explains, which refers to pain that affects the muscle and a type of connective tissue known as fascia in your face, per Cleveland Clinic. Its symptoms include facial pain, headaches, earaches, a limited ability to open your jaw, and pain when chewing. They’re usually worse first thing in morning, after you’ve spent all night clenching your jaws and grinding your teeth. You might notice the pain on one side of your face, probably because people tend to favor one side of their mouth when they clench and grind, as they often do when they chew.

It’s an understatement that living with SARS-CoV-2 in our midst is stressful. Worse still, the usual outlets for your stress, like the gym, are no longer available. All that stress has to go somewhere, though. For a lot of people, “it comes out when they’re sleeping at night,” Bastacky says. “It’s a pressure release valve to clench and grind your teeth.”

But, like me, you could be clenching your jaw when you’re awake, which might also explain your facial pain. Bastacky tells his patients that their teeth should touch only when they’re speaking, chewing, or swallowing. “Other than that, your teeth should never touch,” he says (as I remember that mine are smashed against each other pretty much all day). This, too, is a stress response, not unlike when a car pulls out in front of you when you’re driving, and your entire body tenses, including your jaw.

The vast majority of the patients who consult Bastacky about issues related to their temporomandibular joints (TMJs) — the joints on either side of your jaw that allow it to hinge open and close, Mayo Clinic explains — have myofascial pain, but no problems within the TMJ itself. A very small minority do have problems within the TMJ, a condition known as temporomandibular disorder (TMD). In TMD, the cushiony disc that sits between the ball and socket of the TMJ slips out of place, causing pain.

That said, if myofascial pain goes untreated, it can develop into TMD, Bastacky says. If you think you’re experiencing myofascial pain, he tells me, you can contact your primary care doctor about it first. They can prescribe you ibuprofen and a muscle relaxant. If necessary, they’ll refer you to a general dentist, who can also make a TMJ orthotic for you to wear at night, and if your symptoms are serious enough, in the day, as well. If it turns out you have TMD, you’ll be referred to an oral and maxillofacial surgeon who can treat the anatomic problems within the joint.

Managing the stress that might be underlying your ravaged jaws is also key. Bastacky suggests reaching out to a psychological or clinical social worker, at minimum, if you have the means. If you require medication for anxiety and/or depression, you’ll need to a see a psychiatrist. “If you don’t address the source of the problem, which is anxiety and depression, we can treat the [pain] symptoms forever, and they’re really never going to get 100 percent better,” he says.

I have a therapist, but I haven’t spoken with her in a while. Maybe I should take my achy jaw as a sign that I should. It just goes to show that if I don’t manage my stress, my body will keep nudging me until I do.

More like this
COVID-19 vaccine drug interactions: Is there anything I should avoid?
By Joseph Lamour
10 newly vaccinated people told us their Hot Vax Summer plans
By Ally Spiroff
An ode to quarantine meals that got us through the pandemic
By Melissa Pandika
Stay up to date