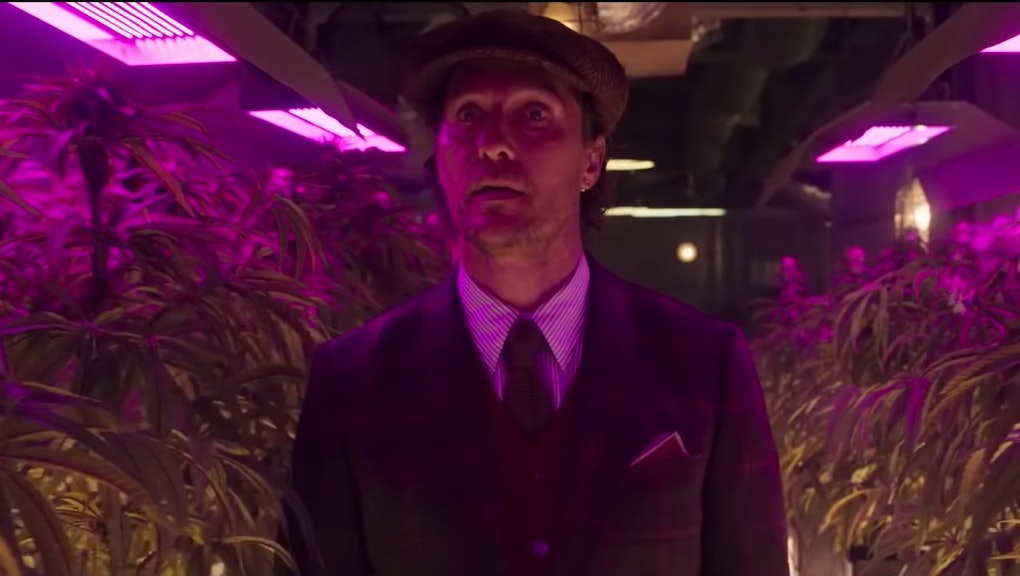 Be still my heart. Guy Ritchie is back to his goofy, ass-kicking roots. The newly released trailer for The Gentlemen, starring Matthew McConaughey as the kingpin of a British weed empire under assault, seems like a return to form, akin to the director’s beloved films like Snatch.

Aside from McConaughey, the prince of pot, the cast of The Gentlemen is stacked — mostly with gentlemen, though Michelle Dockery is a welcome exception. We’ve got Charlie Hunnam from Sons of Anarchy as McConaughey’s henchman; Henry Golding (Crazy Rich Asians) as the leader of a rival gang; and Jeremy Strong in a turtleneck-blazer-hat ensemble his character on Succession might wear. Eddie Marsan, Colin Farrell, and Hugh Grant round out the buffet of handsome fellas, or “several generations of men I’d embarrass myself for,” as one of my colleagues put it.

The plot of The Gentlemen sounds electrifying. American expat Mickey Pearson (McConaughey) built an expansive marijuana empire in London. “Sweet Mary Jane is my vice,” he croons in the trailer at one point. But when word gets out that he’s looking to cash out of the business, “it triggers schemes, bribery, and blackmail in an attempt to steal his domain out from under him,” according to the studio description. If this first glimpse is any indication, The Gentlemen seems stocked with dramatic quips. “In the jungle, the only way a lion survives is not by acting like a king, but by being the king,” McConaughey growls in the trailer.

Here’s hoping The Gentlemen is nothing like Ritchie’s last film, the live action Aladdin reboot he directed for Disney, featuring a much-maligned Will Smith as the Genie. Here’s also hoping the movie is less of a disappointment than McConaughey’s last stoner flick, The Beach Bum, which was filled with weird misogynistic tropes but did costar Snoop Dogg and Isla Fisher, which was a plus.

Speaking of which, when will the IRL cannabis kings of Hollywood — McConaughey, Woody Harrelson, Snoop, to name a few — get together and start some sort of weed-focused film studio? That’s a billion-dollar idea right there, fellas. Don’t sleep on it.

More like this
You can feel for Khloé Kardashian and also recognize she's part of the problem
By Kara Weisenstein
Nobody is more qualified to host 'Jeopardy!' than LeVar Burton
By Kara Weisenstein
Lena Waithe on empowering marginalized creators and being unafraid to "ruffle feathers"
By Kyla Marshell
Stay up to date