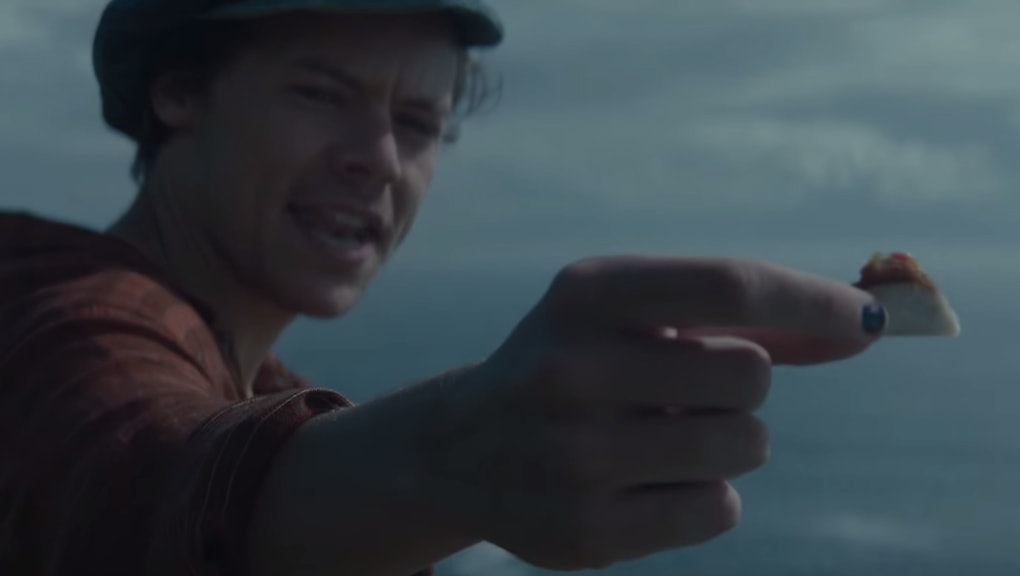 The tiny taco was the bit that destroyed me. How 'bout you?

Harry Styles premiered a weird and whimsical music video for his song “Adore You” on Friday. It’s set on a fictional British isle named “Eroda” (that’s “Adore” spelled backwards, get it?) shaped like a frown, where nobody ever smiles — until the day The Boy (i.e. Harry Styles) was born with a full set of chompers, flashing a megawatt grin.

Things get stranger and more Stranger Things from there. Sad Harry rescues a beached fish, interrupting his Virginia Woolf moment, and keeps it in a coffee pot on his bedside table. His aquatic friend grows ginormous overnight, so Harry commandeers a clear vinyl backpack for it and adorably dances with the fish high on a cliff overlooking the ocean.

I’m not going to spoil the rest of the video. You’ll just have to watch the damn masterpiece yourself. It’s a beautiful fever dream with Shape of Water vibes and a sprinkle of The Lighthouse. “Adore You” is simultaneously whimsical and sad and uplifting, with a heartwarming message at its core. Another amazing thing about this fishy fable: the video is narrated by Spanish flamenco-trap singer-songwriter Rosalía.

Styles has been on fire lately in all his wacky, goofy glory. “Adore You” is his third single to debut this year, after “Lights Up” and “Watermelon Sugar.” (A new album, Fine Line, is due out next week.) The sultry, sweaty, glittery video for “Lights Up” is less goofy than “Adore You” — it looks like a beautiful hallucination of the drug-induced kind. Earlier this fall, Harry also pulled double-duty on Saturday Night Live as both the host and musical guest.

Come to think of it, the “Adore Me” video kind of has the vibe of an SNL short. I’d believe them if someone told me this sketch was cut for time. But to withhold this marvel from the public would be a crime against humanity, obviously. We’re so glad that director Dave Meyers, who's also made music videos for artists like Janet Jackson and Kendrick Lamar, gifted everyone the fishy bromance at the core of “Adore Me.”