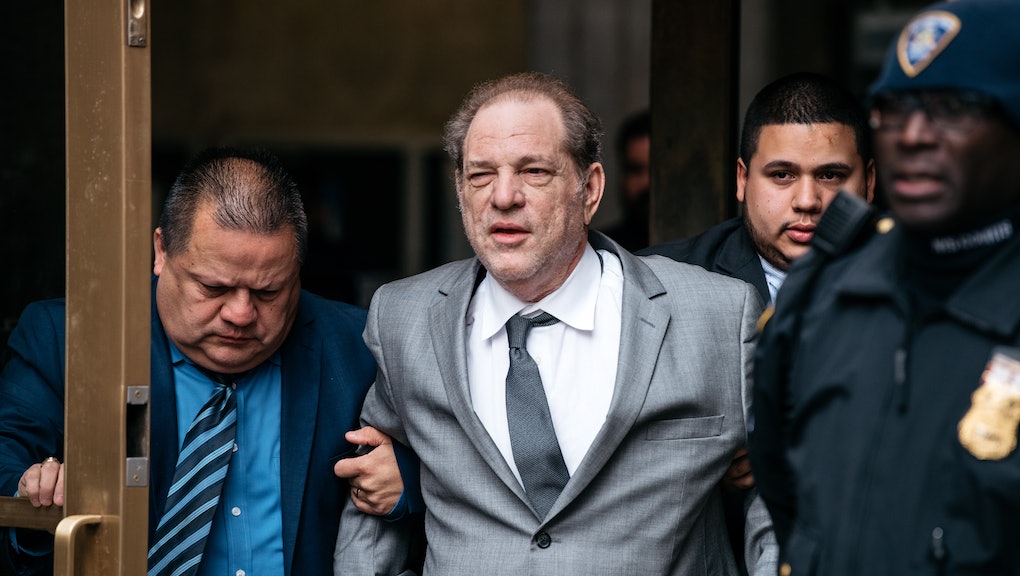 More than 80 women have accused Harvey Weinstein of sexual assault or harassment. The disgraced Hollywood producer is the defendant in a criminal trial for rape in January, and faces life in prison if convicted. But Weinstein claims he’s the real victim in all this.

“I feel like the forgotten man,’’ the 67-year-old complained to the New York Post in an exclusive interview last week. “I want this city to recognize who I was instead of what I’ve become,” he said.

Weinstein sat down with The Post while recuperating from spinal surgery at a Manhattan hospital on Friday. The interview was his first in more than a year, and Weinstein said he only agreed to talk to prove he hasn’t been exaggerating about his poor physical health. He showed up to court last week using a walker, but critics have accused him of faking his injuries for sympathy.

Sitting in front of floor-to-ceiling windows in an elite wing of New York-Presbyterian/Weill Cornell Medical Center, Weinstein complained that he should be remembered as a trailblazer rather than a predator. “I made more movies directed by women and about women than any filmmaker, and I’m talking about 30 years ago. I’m not talking about now when it’s vogue. I did it first! I pioneered it!” Weinstein said.

He even boasted about how much he paid actress Gwyneth Paltrow, one of his alleged victims, while he was the head of Miramax. “Gwyneth Paltrow in 2003 got $10 million to make a movie called View from the Top,” Weinstein said. “She was the highest-paid female actor in an independent film. Higher-paid than all the men.” Paltrow accused Weinstein of luring her to his hotel room and trying to massage her in 1994.

Weinstein touted his philanthropic work over the years, rattling off good deeds in a torrent of karmic accounting. He bragged about the numerous progressive projects, like Paris Is Burning and Transamerica, that Miramax and The Weinstein Company helped produce. He also bragged about his charitable giving over the years. “This was a company that took social issues and tackled them,” Weinstein said.

“I made a success out of myself. I had no money, and I built quite an empire with Miramax and decided to give back,” he added, referring to his upbringing in Flushing, Queens. “If you remember who I was then, you might want to question some of this.”

This is disturbingly flawed logic, of course. Only someone as privileged and enabled as Weinstein would suggest that being a good businessman gives you a pass to behave monstrously. He’s never had to atone for his actions, and he sure doesn’t like being told he ought to.

The Post reported that Weinstein was a “characteristic bully” throughout their interview, threatening to shut it down each time the reporter asked a question he didn’t like. When the paper asked whether the accusations against Weinstein have perhaps cancelled out his charitable giving, leaving him in the karmic red, the producer snapped, “I’ll move on.”

More like this
After 'Promising Young Woman,' Carey Mulligan is taking on Harvey Weinstein himself
By Tim Brinkhof
Here's a chilling peek into just how close Trump got to running a police state
By Rafi Schwartz
Derek Chauvin's lawyers seriously just asked for probation instead of jail time
By Rafi Schwartz
Stay up to date