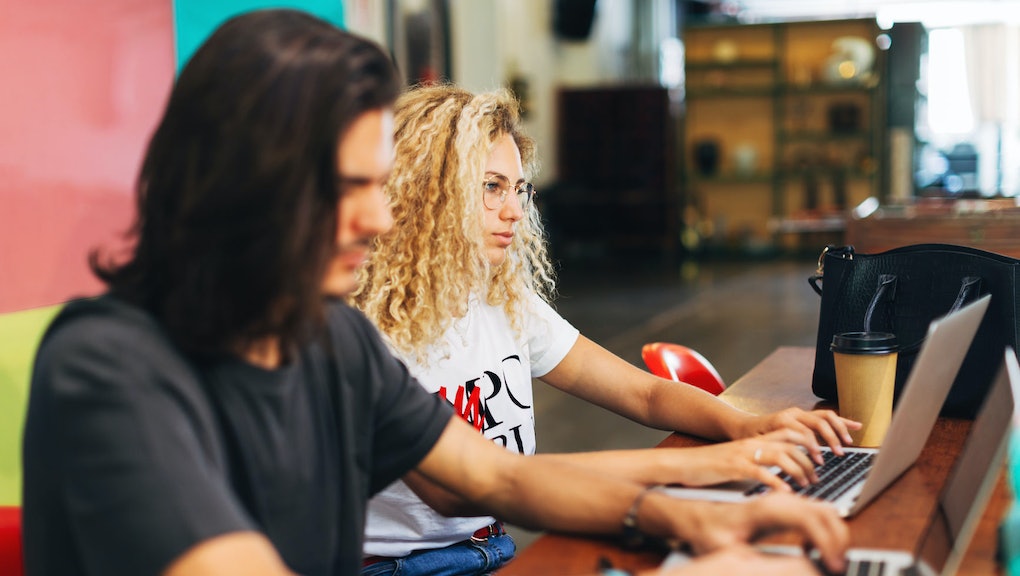 With the U.S. Open underway, tennis fans are once more clamoring to see two of the sport’s all-time greats renew their rivalry on the court. Should Rafael Nadal and Roger Federer clash again, it will mark the 41st time they've faced off on the professional circuit. Though the average tennis player’s performance peaks at around 24 years old, Nadal and Federer — who are 33 and 38, respectively — remain in the top three of the world’s tennis rankings. And their rivalry seems to have fueled their longevity, as well as their excellence.

Federer once said that Nadal is “definitely one of the guys that make me a better player … I think for that, I’m happy about the losses I took.”

“If he is playing very good, I have to play unbelievable [to win],” Nadal said of Federer, returning a compliment as naturally as he returns a serve.

Chances are, neither you nor any of your coworkers are tennis superhumans like Nadal and Federer, but you might have an office rival to contend with at your day job, who, through competition, could provide some similarly positive performance results.

“Whether overtly or otherwise, most companies create a dynamic in which employees compete against each other for recognition, bonuses, and promotions,” according to the Harvard Business Review. Citing several studies, the Review also noted that “competition can motivate employees, make them put in more effort, and achieve results,” while increasing “physiological and psychological activation, which prepares body and mind for increased effort and enables higher performance.”

It’s no wonder, then, that people can enjoy competition in the office. It sparks creativity, can boost accountability, and forge a greater sense of company belonging in employees, which aids in retention. But it’s important to remember that Nadal and Federer have a civil, even friendly, rivalry.

“We have a great relationship all the time … always very respectful,” Nadal said of Federer, who in another interview, described their rivalry as “cool.” “The way we go about it is very different, but yet we both find a way to excel,” Federer added. Ideally, it’s those types of feelings that should be in place about your office rival, or coworkers in general, if competition is going to be a welcome, nourishing presence in the workplace.

“I think there’s an upside and a downside” to workplace rivalries, says Thomas E. Boyce, a speaker, educator, and author specializing in business productivity. “You see the upside when the rivalry is built on a solid relationship that existed even before the rivalry. I think if the relationship exists because of the rivalry, then it becomes more of a negative competition, and you’re creating this environment where there’s the potential for winners and losers.” Workers who are “on the losing side too much,” Boyce adds, usually find themselves demotivated to perform.

Boyce does not typically recommend, to managers, creating competition in their workplace, even between departments, because it can lead to bitterness or in the worst case, "sabotage and backstabbing.” People want to win at all costs in such a work environment, Boyce continues, because they fear losing, and it’s not a good thing when folks are trying to set up their success by the virtue of others’ failures. If such undercutting runs wild, workers will forget that they’re part of a team, all working toward the same goal, ideally, together. If employees are failing in this mission, so is the company they work for.

There are conditions unto which workplace competition can be built into an office’s culture, and become a positive, driving force. If “morale is high because people are treated fairly, they’re compensated well, they’re given meaningful work, then competition can probably enhance performance,” Boyce says.

No matter the intensity of the competition, or whether it’s tinged with mutual respect or divisive loathing for your office rivals, productivity is ultimately sparked by “intrinsic motivation,” says Joe Robinson, a business consultant who focuses on worker wellness. The happiest employees want to feel competent and retain a degree of autonomy, and, Robinson says, they’re working particular jobs or doing certain tasks “for personal growth and for the love of the challenge.”

“It’s really about the goals and internal gratification, not about outperforming someone for the sake of applause or pats on the back,” Robinson adds.

So if you have an office rival, find ways to embrace the competition they bring, instead of seeking to undercut them. That will only hurt the company and your morale. But in order to be most comfortable with the competition, you might have to do a little soul searching, and remind yourself why you took your job in the first place.

More like this
Amazon wants to legalize it
By Melissa Pandika
100 years after the country's largest labor war, its dark legacy still looms
By Kim Kelly
Could fresh air be the key to ending the pandemic?
By Melissa Pandika
Stay up to date