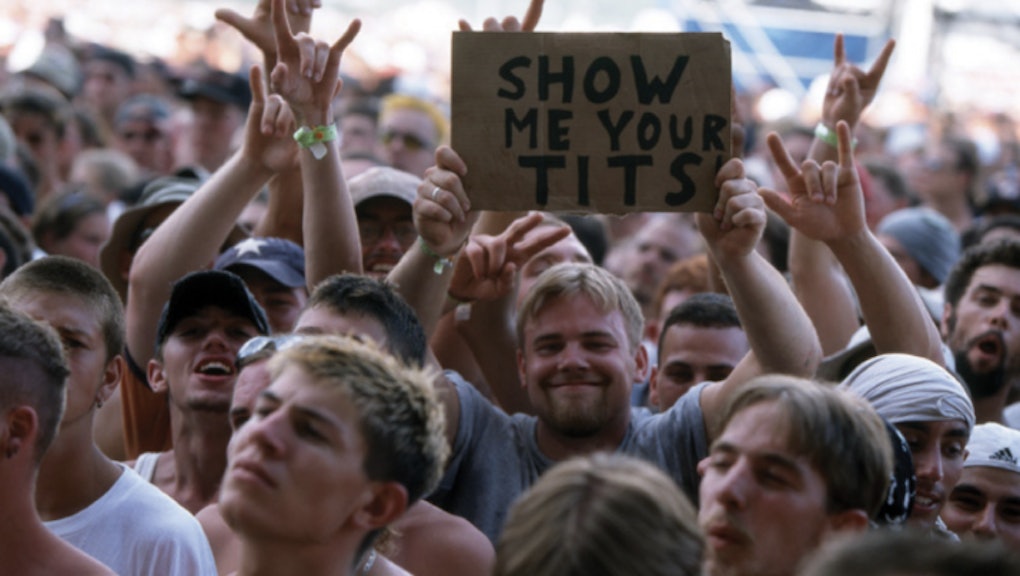 HBO's Woodstock '99 doc is a terrifying mirror of our present

Depending on your age, Woodstock is either the best time of your life or a reminder of how insane the human species can be. And for some really sick people, it's both. We'll get to revisit that chaotic time and see how we really haven't come much further as a society in HBO Max's upcoming documentary Woodstock 99: Peace, Love, and Rage.

The documentary will feature interviews with Woodstock '99 organizers, people who attended the festival, and artists such as The Roots’ Tariq “Black Thought” Trotter, Moby, Korn’s Jonathan Davis, Jewel, and Creed’s Scott Stapp. It took the trailer twenty seconds before the infamous music festival was described by Moby the way you would describe a foreboding cataclysmic storm. From then on, the Woodstock 99: Peace, Love, and Rage trailer drops viewers into feces-lined hedonism. Sexual exploitation of women, exorbitant prices for water that border on extortion, and arson are all captured through VHS footage from above and as close as in the center of mosh pits. At one point, we see Moby innocuously walk off the stage at Woodstock as present-day Moby voiceover says "we need to leave right now." You don't necessarily get fearlessness from Moby's chill music, but an artist being seemingly terrified of a crowd is very alarming and very Woodstock '99.

There is no one culprit for the festival's destructive mayhem. Instead, the trailer places the onus on the "dark energy" of young white males exacerbated by live music drawn from the same energy. It's that malicious energy New York Times critic Wesley Morris says in the trailer "wound up in chat rooms and Reddit boards in 2021." Rather than simply be a walk down memory lane, Woodstock '99: Peace, Love, and Rage appears to be a headfirst dive into how some of the worst parts of America in 2021 started two decades earlier at a three-day festival in upstate New York.

If you've ever heard any stories from Woodstock that don't involve how the late DMX commandeered a crowd the size of a football stadium, then the debauchery in the doc's trailer isn't surprising. A week after the festival, New York State Police were investigating four allegations of fans being raped at the festival, with one occurring in a mosh pit during Limp Bizkit's performance. David Schneider was a volunteer for the social service program Family of Woodstock at the festival, and described to MTV News watching a petite young woman go from crowd surfing to being pulled down into a mosh pit. "These gentlemen, probably in the 25–32 age range, looked as though they were holding her down. They were holding her arms; you could see she was struggling," Schneider said.

At one point, the crowd was so disrespectful, photographer Mike Schreiber remembers Flea from the Red Hot Chili Peppers demanding the men in the crowd to stop grabbing woman's breasts. He even remarks that a smirking white male at the festival holding a cardboard sign that read "SHOW ME YOUR TITS" reminded him of Supreme Court Justice Brett Kavanaugh. The dementedly horny crowd even told actress Rosie Perez to show them her breasts, proving they were monsters and hadn't seen Spike Lee's Do The Right Thing. The festival organizers not only didn't stop the lewdness, they encouraged it by posting topless photos of women at the festival on its woodstock.com website, which honestly should've made them culpable in any of the reported sexual assaults.

People aren't gleefully rolling around in feces from malfunctioning porta-potties, but music festivals have not progressed much from the depravity of Woodstock '99. A 2018 YouGov survey of 1,188 festival goers found that 43% of women under the age of 40 have faced unwanted sexual behavior at music festivals. One in six women surveyed by The Desert Sun told the publication they had been sexually harassed at either Coachella or Stagecoach music festivals, with the former often seen as the spiritual successor of Woodstock due to its large turnout and penchant for newsworthy performances.

Some of the lasting images of Woodstock '99 are large fires set and structures destroyed by riotous fans. It's hard to see that swarm of white males feeling entitled to express themselves however they see fit and not draw a direct parallel to the unmitigated arrogance of the insurrectionists who stormed the U.S. Capitol on January 6. The same way Korn's aggressive metal music tapped into a destructive energy within these white males at Woodstock '99, Donald Trump's anti-government rhetoric pierced any common sense those insurrectionists had and almost led to the murder and kidnapping of elected officials.

Woodstock 99: Peace, Love, and Rage is set to be released on HBO Max on July 23, but we've seen this movie play out before and someone needs to yell cut soon.

More like this
The gay songwriters who secretly ruled the country charts are ready for the spotlight
By Alexa Beyer
Yasiin Bey is stepping away from the Thelonious Monk biopic for the best reason possible
By Keith Nelson Jr.
Dua Lipa has officially distanced herself from DaBaby
By Kara Weisenstein
Stay up to date