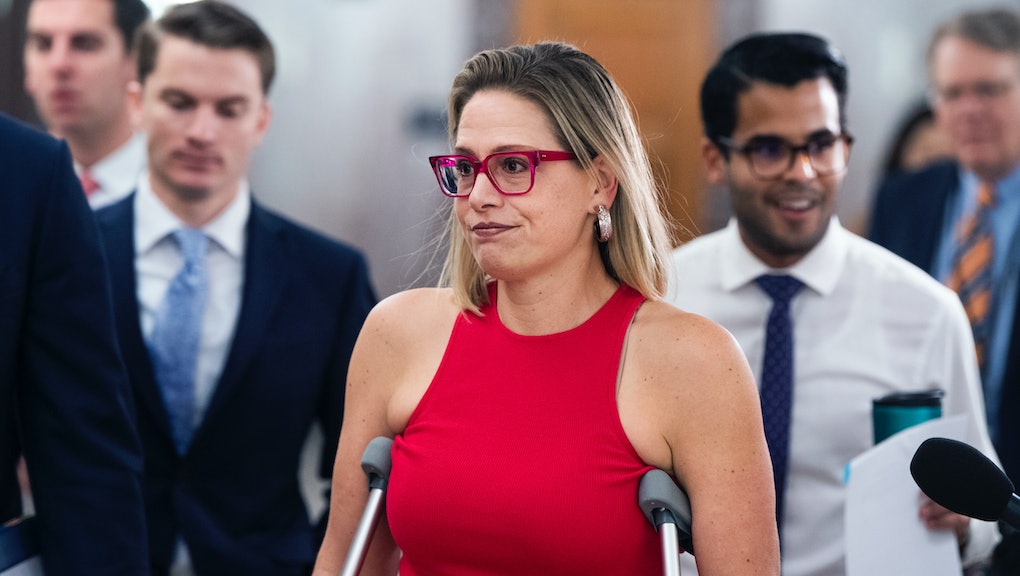 Here comes Kyrsten Sinema to foil her own party again

If there's been a steady narrative through-line in these first fraught months of the Democrats' narrowest of narrow congressional majorities, it's that two Democratic Senators — longtime West Virginia conservative Joe Manchin and Arizona's newly elected, onetime progressive Kyrsten Sinema — have been steadfast in their obstinate refusal to actually help their party do the things it was elected to do.

That incredibly frustrating truth reared its stupid head again on Wednesday, just as the Biden administration was preparing to take the ball (in this case: a long sought-after bipartisan infrastructure bill) into the end zone (in this case: passing the damn thing through congress). Instead of taking the W, Sinema announced that she would not support the Democrats' next major priority: a $3.5 trillion dollar budget package that sits at the heart of the White House's economic plans.

"I have also made clear that while I will support beginning this process, I do not support a bill that costs $3.5 trillion," Sinema said in a statement issued to the Arizona Republic. "In the coming months, I will work in good faith to develop this legislation with my colleagues and the administration to strengthen Arizona’s economy and help Arizona’s everyday families get ahead."

Sinema's bizarre "have her cake and eat it too" support for "this process," but not the final price-tag for the bill itself, signals that Biden's hopes for a sweeping budget bill — one that could, were she onboard, pass with just 50 Democratic votes via reconciliation — might be dead in the water before it even sets sail. At the very least, it's a sign that even with a narrow majority in congress, the Democratic party's priorities can be held hostage by a sole holdout who has regularly shown disinterest in supporting other keystone legislative efforts.

Sinema's balking at the Biden budget's $3.5 trillion price tag seems more in line with the criticisms of Senate Republicans, urged by former President Trump, who warned the GOP not to "let this happen!" in a recent statement.