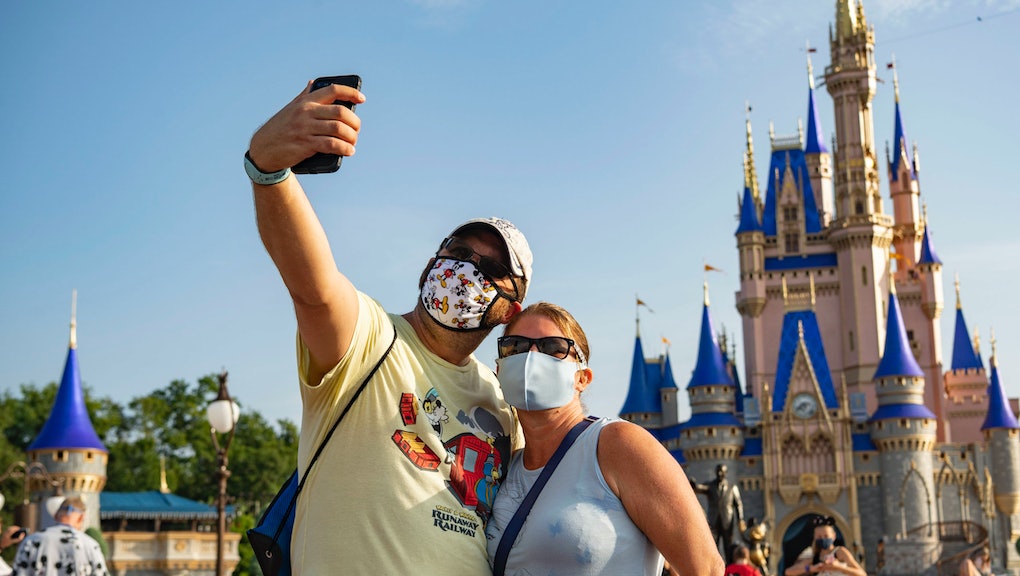 Disney World celebrated its July 11th reopening with a disorienting Twitter video. The staffers at Epcot, Animal Kingdom, Hollywood Studios, and The Magic Kingdom vogued for the camera in sky-blue hospital masks, drawing a stark contrast between the realities of America's coronavirus epidemic and the critical realities of a workforce that's been on furlough since March. That clip became a brief meme on the internet, as people marveled at the ersatz nature of our current crisis. Everyone knows we're in the middle of a generation-altering event, and yet, some people are still willing to visit theme parks. What a paradox! It is impossible to say definitively if Disney World should be serving guests right now, but it is undeniable that the thousands of workers the parks employ were hurting without any significant government intervention to palliate the unprecedented economic slowdown that left them without a job. While America’s reopening has been met with staunch criticism, it’s important to consider the many folks who've been left with little choice other than to grin and bear it when the boss calls them back to work. They shouldn't be in that position in the first place. But while they are, they’ll take what they can get.

I spoke to a single mother who works as a hostess at a restaurant inside of Animal Kingdom in Orlando, Florida. She asked to remain anonymous for obvious reasons and told me that initially, she was concerned about returning to the park, where she could potentially contract the disease and pass it to her child. But after constant reassurance and protocols from the Disney World brass, she felt confident that she could face whatever was headed her way. She's been equipped with masks and thermometers and has all of the new regulations memorized. Like so many others who've been asked to come back to work as COVID-19 cases continue to skyrocket, she's holding down her shifts as best she can.

Read our conversation below, about what life is like in the happiest place on earth under quarantine.

What do you remember about the day you were told Disney World would be closing?

When the other parks were shutting down, I remember being like, "Oh no, we're going to be next." I remember getting a message that was like, "Hey, Disney is going to be closing, but just know that you're going to be okay." So I got off of my shift, and I got home, and then I received an email saying that I was going to be furloughed. I'm a single mother, so I was pretty worried. I didn't know how to go on unemployment. But Disney helped us fill out those forms. I was able to get mine pretty quickly. In fact, I remember that it came on Mother's Day. That was nice, but I still didn't know what was going to happen when I got back. Daycares are closed, I wasn't going to be able to watch my kid every day.

How have the day-to-day operations changed since you've returned to the job?

Disney has done an amazing job of keeping everyone safe. When they called us back, we congregated in the Finding Nemo Musical show. That's where they gave us all of our supplies. We got thermometers because we have to take our temperature every morning. We got a checklist of all the new things we have to do. They supplied us with free masks, and we're allowed to go back to get more. We wash our hands, we sanitize everything every hour. Right now, the restaurant is operating at half capacity, with reservations. So it's not super busy. It's just steady. I don't fear getting sick at work because of all the precautions. Management is being very caring towards us right now, which I love.

Was there one moment during that presentation where you were like, "Wow, this is a whole new world."

Yeah, Disney is a very magical place, and we always want to do nice things for our guests. But management told us that we won't be able to take pictures for them anymore. That kind of broke my heart. I love taking pictures for the people who come to our restaurant, in front of our artwork. So it was a little bit sad when they told us, "The way that we're going to spread magic will be a little different." I was like, "Okay, that's a bummer, but I'll make it work."

I'm a single mother, so I was pretty worried. I didn't know how to go on unemployment.

What are some of the new rules you have to contend with, even when you're not interacting with guests?

They do have a rule where you cannot take off your mask unless you know you're not going to be around anyone. So I'm wearing a mask 24/7, unless I'm sitting in the break room, in my own little corner. But as soon as I finish eating or drinking, it's right back on.

Were you at all nervous when you first got the call to come back? Obviously you wanted to get back to work and recoup your income, but did you have any apprehension about the pandemic?

They're trying to be truthful with us, even when they don't know what's happening.

You've mentioned that there is some angst about the amount of hours everyone is getting now that people are going back to work. Tell me about that.

I had to figure out everything. The hours were a little difficult. This other restaurant in Animal Kingdom, Tusker House, has higher seniority than ours, and they were going to stay closed which meant that their staff was going to be in our location. So my shifts haven't been great. In the beginning, I was working six days, and less than 36 hours. I'm like, "That's not fair, these other people are getting five days and 45 hours?" It's a little ridiculous. I'm not getting full-time shifts right now.

There does seem to be a lot of confusion around Disney about who is getting called to work, and who is still sitting at home waiting to get their jobs back. Has that been the case?

A lot of my part-timers are like, "When are we going to get called back?" And I'm like, "We're still bringing in full-timers from another restaurant." It's very confusing. It's a feeling of, "When is our family going to be back?" I don't know what's going to happen.

Has Disney been transparent about when they'll be getting either their jobs back or their full hours back, or are people still pretty in the dark about that?

We still have questions about that. A lot of the managers are like, "Hey, we're here for you, but we don't have all the answers right now." They're being honest with us, which is really nice. They're trying to be truthful with us, even when they don't know what's happening.

Have you had any problems with customers that aren't respecting the rules?

The guests have been really good. They've been really nice about it. When they sit down they say, "Is it okay if I take off my mask?" I'm like, "It's fine, you're fine." They're taking it seriously. But the interactions have changed. I'm a hostess, and I want to talk to our guests, but I have to rush through it because we don't want to take too much time. It's very different. I don't know how to explain it, it's just very different.