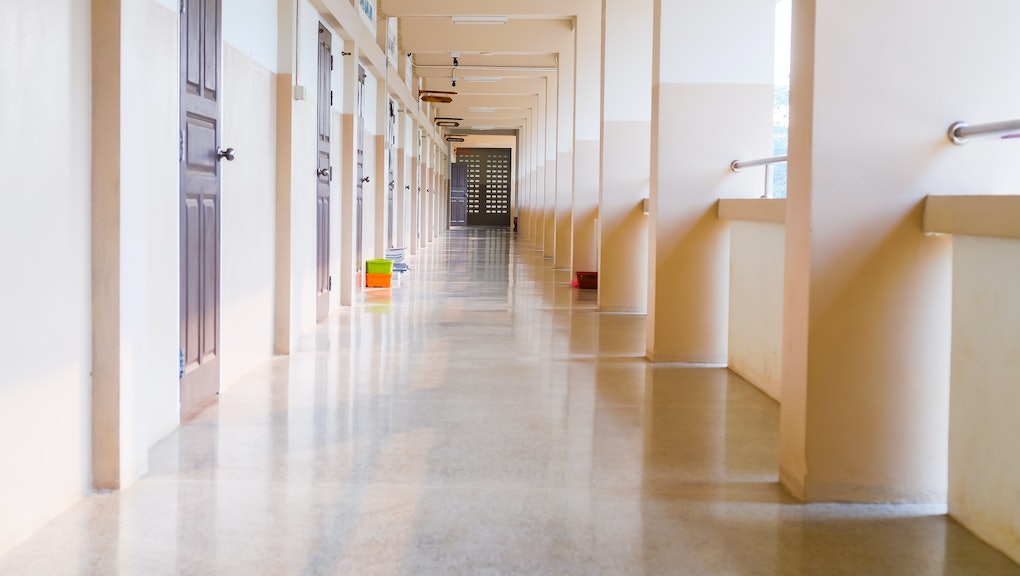 Ever since the phrase "Black Lives Matter" captured national attention, opponents have responded with their own sayings like "All Lives Matter." Although people try to pretend these alternative phrases are mundane, they're basically a flashing neon sign that says WARNING: RACISTS AHEAD. Now, after a group of students wore "White Lives Matter" shirts to school, some people in a small Pennsylvania town are trying to push back.

In a Snapchat obtained by Vice News, five students from Montgomery Area High School can be seen lined up in front of a truck. Each of the students is wearing a white T-shirt with "White Lives Matter" written across the front. The Snapchat was posted by another student, per Vice, with a caption that read, "One of the most disrespectful things I've ever seen happen in Montgomery. Only reason you did this was to piss people off and look like a complete racist, not funny at all."

Located a few hours outside of Philadelphia, the city of Montgomery has a population of under 2,000 — and 97% of people living there are white. Because of the town's small size, the sources who spoke to Vice about the incident asked to remain anonymous to avoid retaliation.

However, each of the sources Vice spoke with seemed to agree that as a whole, Montgomery is "very right-wing" and "conservative-Christian oriented." If you couldn't already tell that from the Snapchat photo, the school's mascot is an image of a Native American man wearing face paint and with feathers in his hair; the character is named the "Red Raider." Indigenous people in the United States have long flagged this type of imagery as racist and a holdover of colonial legacies.

With that in mind, it's not surprising to hear that the students reportedly haven't received any sort of punishment, or even a basic reprimand, for the offensive display. One person told Vice, "They were sent home from school. It was the LAST DAY. There were NO other repercussions. They even went to prom the very next night."

Of course, this is far from the first time that white students who have either completely dodged or received only the faintest punishment for racist actions. For example, there were the Colorado State University students who were found to not be violating university rules when wearing blackface. And then, a white student at a Connecticut high school talked about how he wanted to lynch Black people on Snapchat in 2018, whose vitriol was almost ignored entirely.

These instances must also be read alongside the racial disparities for punishment that exists in schools, too. Nationwide, Black kids are more likely to be punished than white ones, and these rates may be associated with county-level rates of racial bias. If looking at the numbers isn't enough, in Oklahoma, one Black student faced criminal charges for knocking a MAGA hat off somebody's head. The Connecticut high schooler who threatened to murder Black people faced nothing of the sort.

When you're located in the heat of the mess, speaking up can be hard. In Montgomery, anyone who steps outside its political boundaries ends up paying for it. As one source told Vice, "Each graduating class has roughly 45-60 kids per class. So in a town like this, you don't really go against the grain or you are bullied and ostracized."

Still, if the school district refuses to step in, then people need to start applying pressure. Luckily, some people are making their feelings about the incident clear. In a letter to the editor of the Williamsport Sun-Gazette, a local newspaper, Sherry Lee Havonbrook wrote, "These students should be ashamed of themselves as this is a known hate group. I am ashamed for the town which prides itself in having such a great school."

"I’m horrified for the targeted students, staff, and those that attend that do not align with such bigotry," Havonbrook continued. "I hope things get better but I’m disgusted."

More like this
Ilhan Omar is leading a push for the State Department to combat Islamophobia
By Vanessa Taylor
More than 200 GOP lawmakers asked the Supreme Court to overturn Roe v. Wade
By Rafi Schwartz
Republicans are in an excellent position to weasel their way back to House control
By AJ Dellinger
Stay up to date