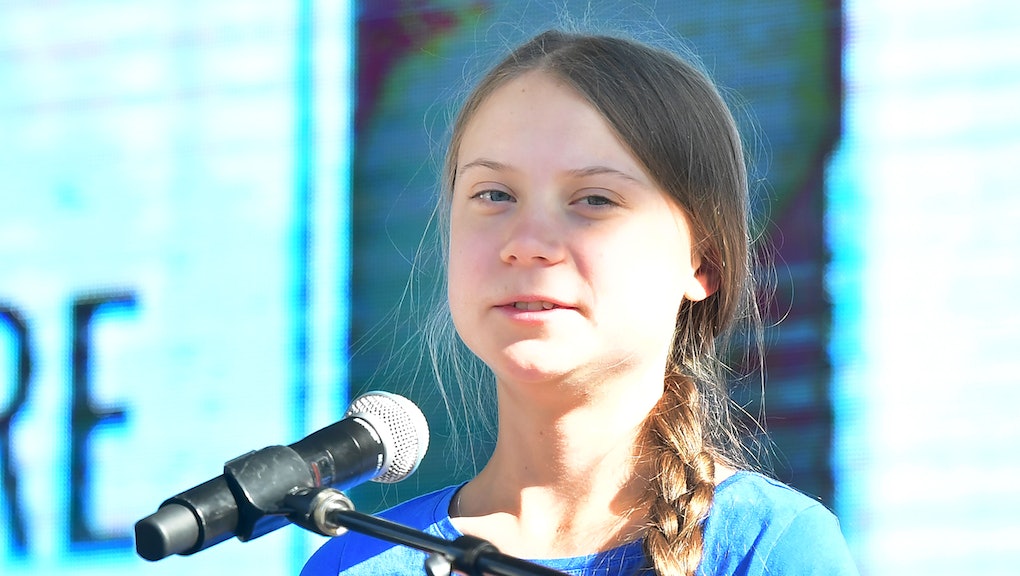 Hillary Clinton believes male leaders are intimidated by 16-year-old climate activist Greta Thunberg. The Independent reports that the former secretary of state shared her opinion Sunday night while speaking to daughter Chelsea about their book The Book Of Gutsy Women: Favorite Stories Of Courage And Resilience. The conversation took place at a concert venue in London.

“It’s been fascinating to watch how scared a lot of grown-up male leaders are of this young 16-year-old girl who speaks up about the threat of climate change,” Clinton said. She added that she believes Thunberg’s outspoken advocacy can “rattle” the “ancient DNA” of politics, because she's a young woman speaking unapologetically.

“You could probably take some of the people who have been so critical of [Greta] on social media and in other settings, attach them to a lie detector, and say, ‘Don’t you think that’s a bit sexist,’” Clinton continued.

The younger Clinton agreed with her mother’s assessment. “More broadly, [Thunberg’s] real clarity and fearlessness and just being so unbowed and relentlessly focused on the future I think is incredibly threatening to a lot of people,” she said, noting that critics may be lashing out at Thunberg personally because they can't disagree with her message.

Thunberg’s work has not stopped since she famously criticized the United Nations for not doing enough to reverse climate change. The Swedish teen appeared in North Carolina on Friday to support a student-led climate strike, according to The Charlotte Observer.

During her speech, Thunberg told the crowd of 1200 that she believes “humanity is standing at a crossroads.” She applauded her peers for participating in the climate change movement, even in the face of stagnant leadership. “It is we young people who are the future, but there is not time for us to grow up and become the ones in charge, because we need to tackle the climate right now,” Thunberg told the crowd.

“We want to be able to say we did everything we could to push the world in the right direction," she said. "We have something just as powerful — our voices — and we need to use them. This is our future and we will not let it be taken away from us.”

More like this
Bernie Sanders simply does not care about your archaic Senate rules
By AJ Dellinger
Amid daily reports of catastrophe, Americans are finally starting to realize climate change is bad
By AJ Dellinger
Should public transit be free?
By Andy Crump
Stay up to date