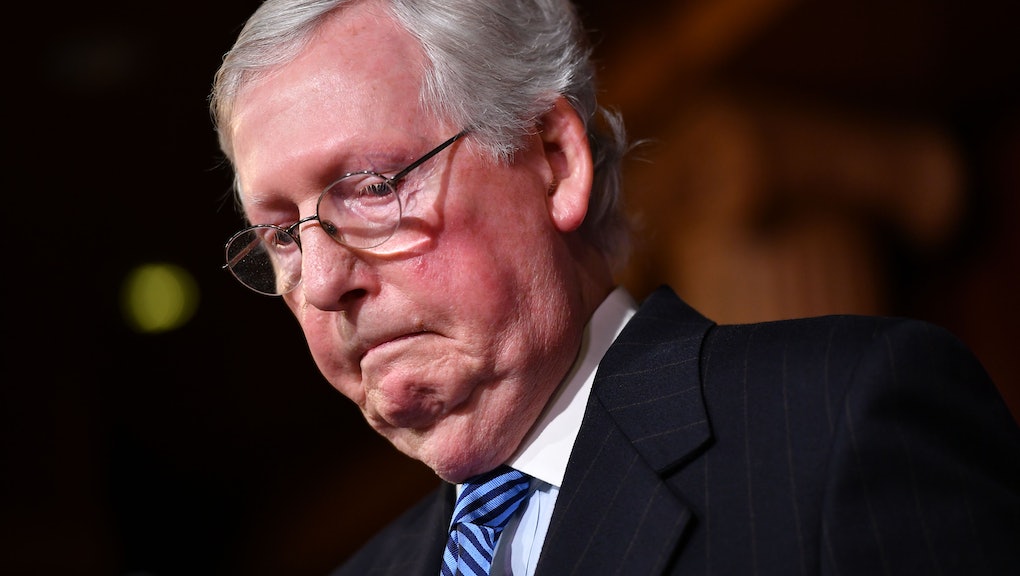 Let me make one thing extremely clear: Former President Donald Trump and Senate Minority Leader Mitch McConnell are two of the most perniciously malignant political forces the country has seen in years, if not decades. That they never seemed to really like one another only highlights the craven political calculation each one made to keep the other chugging along in power for four years, while they each held their noses and wrung every politically exploitative drop out of their relationship for as long as they could.

It was a deal between devils that was never meant to last — the sort of "I'll scratch your back (give you your judges) if you scratch mine (let me do crimes)" arrangement that was bound to implode the moment the precarious equilibrium between the two went slightly out of whack ... which it did this week, after McConnell effectively cleared the way for Trump's second impeachment acquittal, only to denounce the former president once the vote was in.

With nothing to lose, and plenty of time on his ex-presidential hands, Trump on Tuesday evening released a lengthy, typically self-aggrandizing missive denouncing McConnell as "dour," "sullen," and an "unsmiling hack."

"The Democrats and [Senate Majority Leader] Chuck Schumer play McConnell like a fiddle — they've never had it so good — and they want to keep it that way," Trump wrote, before accusing McConnell of being a pawn of Chinese influences.

"McConnell has no credibility on China because of his family's substantial Chinese business holdings," Trump wrote — a not-so-oblique reference to McConnell's wife Elaine Chao, whose family runs an international shipping company. Chao, of course, served as Trump's secretary of transportation for nearly the entirety of his time in office, marking her as one of the former president's few Cabinet officials who actually stayed on the job the entire time. (She only announced her resignation the day after Trump incited a mob to storm the Capitol.)

But now that Chao and McConnell aren't in a position to actively help him anymore, the laughable veneer of honor among thieves has been abandoned entirely.

Broadly, Trump's out-of-the-blue proclamation can be seen as an effort by the ex-president to reassert his authority over the increasingly MAGA-fied Republican Party. But given Trump's almost pathological inability to think beyond his own personal sense of self-preservation and immediate desires, I hesitate to give him credit for anything resembling "tactics" or forethought. Instead, Trump's letter feels less like a statement of policy and purpose, and more like a spleen-venting session sloppily couched in his best attempt at the language of grand political maneuvering.

Why do I think this? Consider that Trump reportedly had to be walked back from including a line, per a Politico source familiar with the statement's drafting, "about [McConnell] having too many chins but not enough smarts."

So, yes, this is ostensibly the latest battlefront in the ongoing war for who will control the GOP from here on out. (Spoiler: It's Trump.) But more than that, it's the work of an angry old man who is bored and paranoid and eager to lash out at anyone dumb enough to think they could actually avoid his predictable backstabbing.

McConnell has not yet personally responded to Trump's attack, but if he does, Trump will likely double down as usual. And if he doesn't, Trump will likely keep up the assault on McConnell, hammering home that McConnell is "weak" and "a loser" for as long as he can, or until he eventually finds a shinier object at which to yell.

Either way, both men deserve this. I hope they spend their last years on Earth locked in this completely pointless grappling match, making one another miserable, and giving the rest of us the precious gift of laughter. Lord knows we need it these days.

More like this
Trump is having his best week since leaving the White House
By Rafi Schwartz
Texts from Matt Gaetz's "wingman" allege that the congressman paid for sex with a 17-year-old
By Rafi Schwartz
In his first address to Congress, Biden took on the country's vices: guns and police brutality
By Rafi Schwartz
Stay up to date