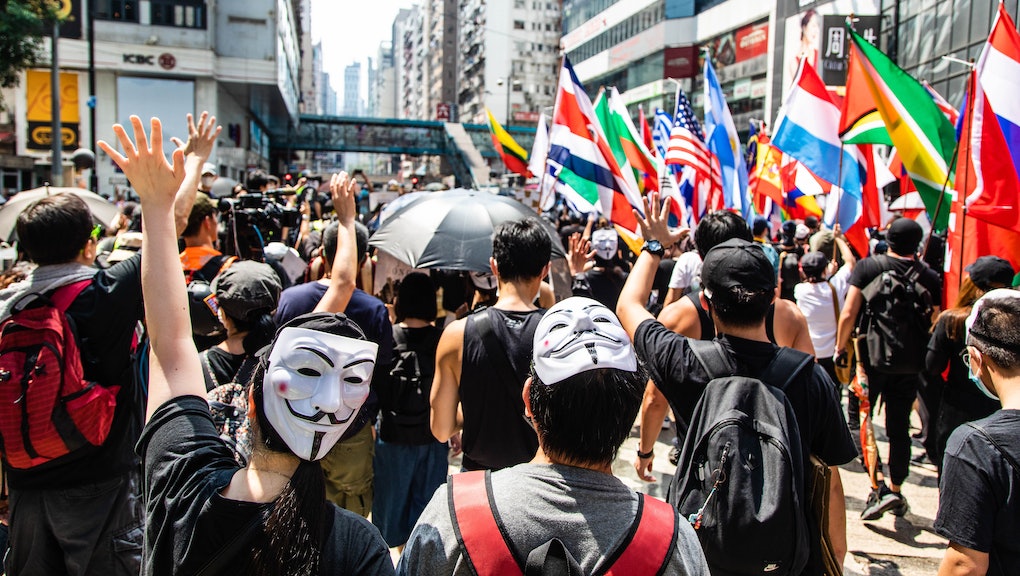 Massive protests in Hong Kong on Tuesday descended into violence when police shot a protester with a live round, the first such incident in nearly four months of upheaval. The shooting was a major escalation in police response to the demonstrations that have engulfed Hong Kong since June — and proved a stark contrast to the celebrations on the mainland marking 70 years of Communist Party rule in China.

People in both Hong Kong and mainland China had been preparing to mark the Oct. 1 anniversary of the founding of the People's Republic of China. In Beijing, the date is usually commemorated with military demonstrations and celebratory fanfare — but in Hong Kong, where young people have been taking to the streets for weeks to demand pro-democracy reforms, it instead was an opportunity to co-opt the mainland government’s flashiest day to send a different message.

Per local media, about 6,000 officers were deployed to the streets of Hong Kong to contain the protests Tuesday. But that didn’t stop tens of thousands of people from spreading across the city in an effort to redirect the spotlight from the Communist Party of China’s longevity to its failures. Flyers for the protests in Hong Kong called Tuesday a “day of mourning,” and BuzzFeed News reported that marchers adopted a slogan saying, “There is no National Day, only a national tragedy.”

The new saying was perhaps prescient because in the afternoon, one officer shot a teenaged protester. The shooting was a first in what had up to this point been a peaceful if raucous series of protests. A video circulating on social media showed that the protester was shot at close range after swinging what appeared to be a metal pipe at the officer.

The protester was an 18-year-old, Yolanda Yu, a spokeswoman for the Hong Kong Police Force, said in a video posted on Facebook. Local media reported he was a high school student. While the injury wasn’t life-threatening — the student was hit in the left shoulder and taken conscious to the hospital — the event marked a dark moment in the history of tensions between the semi-autonomous region and the mainland.

Hong Kong and mainland China have been operating under a “one country, two systems” policy since 1997, when the United Kingdom handed Hong Kong back to China. Under the policy, Hong Kong is able to maintain its own independent legal system and police force, and its residents are afforded many rights denied to those on the fully authoritarian mainland — including the right to free speech and free assembly.

This policy is set to remain until at least 2047. Many in Hong Kong, however, say that China is chipping away at their independence already. A pro-Beijing election committee, for example, selected Hong Kong’s current chief executive, Carrie Lam — who was present at Beijing’s celebrations Tuesday.

Wilfred Chan, who covered Hong Kong’s Umbrella Movement protests in 2014, wrote that the relationship between Hong Kong and mainland China has changed in large part because China itself has changed. With a rapid growth in China’s economy, Hong Kong is no longer as economically important to the mainland as it once was.

“It feels almost absurd to recall the hopes of Hong Kong’s progressive politicians of the 1990s — a time when Hong Kong’s GDP equaled as much as one-fourth of China’s — that the city might one day bring liberal democracy to the mainland,” he wrote over the summer in Dissent Magazine. “Today China’s GDP is over 30 times greater than Hong Kong’s, and China is the one remodeling Hong Kong in its own image. In the last two decades, Beijing has systematically captured Hong Kong’s most powerful institutions, paid off oligarchs, consolidated monopolies, and rammed through white-elephant infrastructure projects — recycling the machinery left by Hong Kong’s colonial ex-rulers to achieve its authoritarian ambitions.”

The current protests in Hong Kong are a clear continuation of this increasingly fraught relationship. For the mainland, there’s an incentive now to keep Hong Kong in check, both because it remains a critical financial hub and because territorial integrity is key to nationalism anywhere.

Fast-forward to this spring, when Lam proposed an extradition bill that would have enabled people accused of crimes to be sent to mainland China for trial. The bill sparked the current protest movement in Hong Kong, and even though Lam formally withdrew the bill over the summer, the protests have now evolved into a larger pro-democracy movement.

On Tuesday, some protesters held their hands up showing all five fingers — a reference to the five demands they have of the government, including an independent inquiry into the police and genuine universal suffrage.

The events in Hong Kong were a stark juxtaposition to the celebrations in the Chinese capital, where a massive military parade put China’s new weaponry — including a ballistic missile that can reportedly reach the United States in 30 minutes — on display. The spectacle was followed up by fireworks as well as musical and cultural performances throughout the evening.

Chinese President Xi Jinping’s rule isn’t realistically under threat from the protests, nor is China’s single-party government. But Beijing will still have to decide what to do about the political upheaval in Hong Kong — on top of handling the other issues already plaguing the mainland.

As The Washington Post’s Anna Fifield wrote, the Communist Party of China has “cracked down on lawyers, human rights activists, and other members of civil society” in order to “stamp out dissent,” and the government has additionally “overseen a sweeping campaign to forcibly assimilate ethnic minorities, detaining about 1 million Uighurs in re-education camps in Xinjiang.” Xi has also arrested more than 1.5 million people in the name of “anti-corruption,” Fifield noted.

There’s also, of course, the months-long trade war with the U.S. that President Trump initiated last summer. China’s economy is slowing as a result — China’s commerce minister conceded as much Sunday — and while the two countries are set to talk later this month, tensions are still high.

It remains to be seen how Beijing will respond moving forward. For now, Xi is stressing that “no force” will stop China.

“Today, a socialist China is standing in the east of the world, and there is no force that can shake the foundation of this great nation," Xi told a crowd early Tuesday. “No force can stop the Chinese people and the Chinese nation from forging ahead."

More like this
New York has set aside a massive, first-of-its-kind fund for undocumented workers
By Rafi Schwartz
Jailhouse lawyer Johnnie Cook is fighting for pandemic justice
By Mai Tran
Georgia's voter suppression law is bad, Coca-Cola and Delta have finally decided
By Rafi Schwartz
Stay up to date