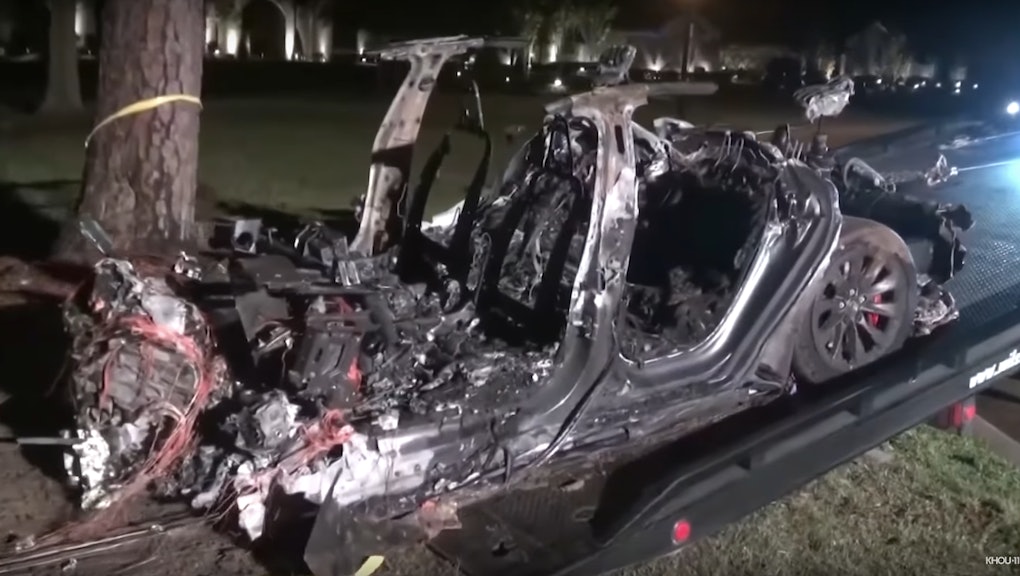 On Saturday, Elon Musk touted the safety of Tesla's Autopilot feature, an advanced driver-assistance system that is capable of steering and accelerating a vehicle all on its own. Just hours later, two people died in a Tesla that had Autopilot engaged and no one behind the wheel. The car, with no one in control or able to intervene, reportedly missed a turn and ran into a tree at a high rate of speed, causing the Tesla Model S to burst into flames and killing the two passengers.

According to a report from local CBS affiliate station KHOU11, the vehicle was traveling extremely fast late Saturday night, with one man sitting in the front passenger seat and another in the back seat. "[Investigators] are 100% certain that no one was in the driver seat driving that vehicle at the time of impact," Harris County Precinct 4 Constable Mark Herman said during a press conference. Per authorities, the car had Autopilot engaged when it failed to navigate a slight curve in the road, instead continuing at full speed before ramming into a tree and catching fire. The fire reportedly burned for close to four hours, requiring firefighters to use more than 30,000 gallons of water to extinguish the flames because the fire kept reigniting. It was not until the flames were out entirely that first responders were able to recover the bodies inside the vehicle.

Mic reached out to Tesla for comment but did not receive an immediate response. Last year, the company dissolved its press office entirely and rarely responds to media questions.

The crash is not the first accident involving a Tesla vehicle that had Autopilot engaged. There have been at least 27 such incidents investigated by the National Highway Traffic Safety Administration, and there have been several fatal crashes involving Tesla's sort-of-autonomous driving system. In 2016, a crash in Florida that cost the driver his life occurred when the Autopilot feature failed to recognize a semi-truck trailer and attempted to cut into the lane occupied by the 18-wheeler. A similar incident occurred in 2019 when a car with Autopilot active crashed into the side of a tractor-trailer, killing the person behind the wheel of the Tesla. In 2016, a driver in China lost his life when his Tesla's Autopilot reportedly failed to recognize a road-sweeping truck and rammed into the back of it. Another accident in 2018 killed a driver when the Autopilot-enabled vehicle smashed into a safety barrier on a California highway.

The Texas crash appears to be the first case in which there was no driver behind the wheel during the fatal crash. Tesla has warned drivers to provide constant attention to the road even with Autopilot engaged, and within its support documents informs drivers that the driver assisting features "require active driver supervision and do not make the vehicle autonomous."

Despite these official warnings, though, the company's CEO has often overstated the capabilities of Autopilot. In 2019, Musk said that "full-self drive" would be available by the end of 2020 and that drivers would be able to fall asleep while their car drives them to their destination without any intervention needed. In 2020, Musk claimed that fully autonomous driving was right around the corner and was "clearly going to work." It's the same promise he's been making since 2016, when he claimed full self-driving was just two years away and that a Tesla would be able to drive from New York to Los Angeles without a driver behind the wheel. He's talked up the idea of Tesla owners being able to watch a movie or play video games while their car does the driving for them.

Everything Musk promises sounds like what is known as Level 5 autonomous driving, which does not require any human interaction. However, emails between Tesla and regulators in California published by The Drive earlier this year revealed that Tesla cars are only currently capable of Level 2 autonomy, which requires drivers be alert and available to take the wheel at a moment's notice.

Tesla brands its self-driving features in a way that makes you think the cars are in complete control, with names like Autopilot and Full Self Driving. All the while, the company's very public and Too Online CEO makes outlandish promises and talks up features in a way that makes them sound far more impressive than they are. Tesla drivers should never leave the wheel of their car unattended, but it's hard to differentiate hype from reality. Unfortunately, failing to do so can be fatal.