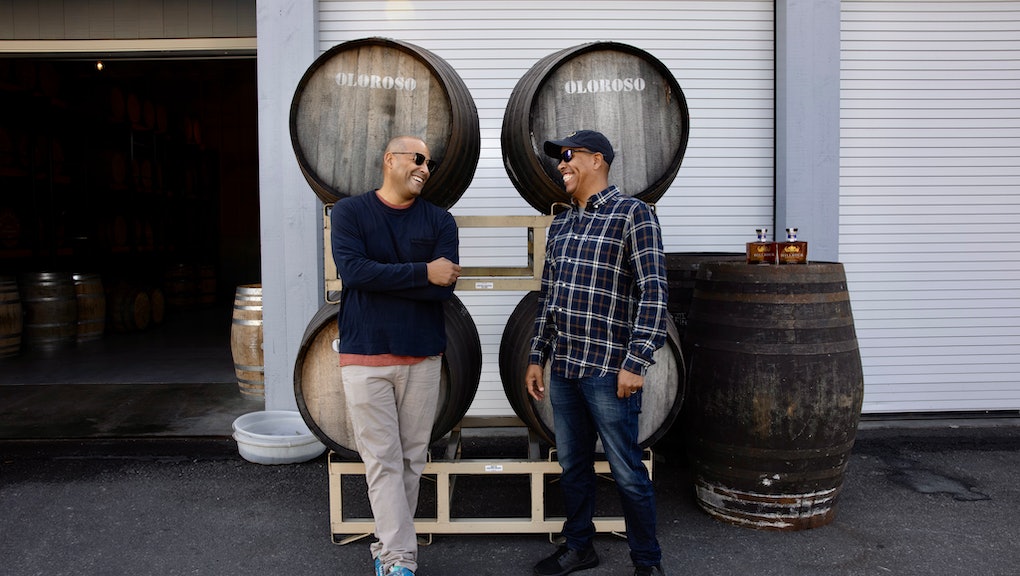 “I was a Black guy who was curious about bourbon,” says O.J. Lima, describing his impetus for co-founding Taste Select Repeat, an online members club that curates and ships hand-selected bottles and barrel picks from distilleries the world over.

Curiosity, as we all know, can be a fiery catalyst for change. When Lima and his friend and business partner Pierre Auguste first connected over a shared love of whiskey, neither could have imagined it they’d be carving a revolutionary niche in a historically homogenous industry. Let’s be real: The whiskey world can be an intimidating one for BIPOC, women, or even just sipping novices feeling overwhelmed by all the jargon.

The duo also couldn’t have expected they would be launching their brand while also contending with the fallout of a pandemic, but, in true entrepreneurial spirit, they’ve still managed to quietly subvert dinosaur narratives around who consumes whiskey, and how.

Lima, the former director of content operations at First We Feast, Complex’s food- and drink-focused platform, was a longtime gin drinker up until a friend introduced him to Maker’s Mark, a ubiquitous wheated bourbon he found much more agreeable than some of the harsher whiskeys he’d been introduced to in college. Around the same time, First We Feast was introducing a city guide section which led to requests from liquor companies to host tastings in the office.

“I just started to amass all of these bottles,” says Lima, who now lives in Washington, D.C. Because members of the media are often gifted bottles of booze to try, Lima describes a world of new spirits he’d been exposed to during that phase of his career. “I just got really interested in trying different things. And then I took my first trip down to Kentucky — it was actually Maker’s Mark’s facility; it was my first time being in Kentucky, period. It really showed me how much science was involved in the process and it really renewed my passion for collecting bottles.”

Lima’s newfound bottle-hunting hobby would soon bring him to 58th Liquor and Wine, a NYC shop run by Shawn Kim, through whom he met his future business partner, Pierre Auguste. Kim, Lima says, was great at getting and finding bottles and had begun doing his own barrel picks in the shop.

“By this time, I was listening to podcasts like Bourbon Pursuit and Dads Drinking Bourbon and they were always talking about barrel picks, but it was also always a lot of white guys in the South; it wasn’t something that was happening on that level in New York, so I really tried to learn about single expressions and the process,” Lima says. “About three years in, Sean actually invited me to do a barrel pick so that was my second trip to Kentucky. We went to Four Roses and that was really the beginning.”

As Lima was falling further down the rabbithole of craft whiskey, so too was Auguste, who was also finding ways to apply a passion for photography to his more booze-inspired pursuits. In fact, it was actually his bottle photography that finally materialized a meeting between the two. They bonded after Auguste took some truly fantastic pictures of one of the whiskey bottles he’d bought at Kim’s store and a lightbulb went off: Marketing is going to be key to opening up the whiskey world to curious yet intimidated people.

The two chatted more at Copper & Oak, a well-known whiskey haven in the city, where they soon discovered they shared a love of hip-hop, sports and travel. Beyond that, they realized that in a range of whiskey enthusiasts, they were part of a growing demographic of people whose interests were actively bucking stereotypes about what whiskey communities look like. “In the beginning we’d go to all of these tastings and events and we’d be the only Black guys there,” shares Lima.

What further mobilized the two were the microaggressions they experienced while delving into the industry. “It’s really more about the assumption that you just want Hennessy or some kind of cognac, and that you’ll go for the cheapest bottle,” Auguste says. “There were also times we’d turn up for a meeting or to an event and just kind of get the question mark treatment where it was really obvious people weren’t sure if we belonged there or why we were there.”

This concept of “belonging” is an underrated yet crucial aspect of their growing brand. Lima and Auguste are determined to make Taste Select Repeat a community for whiskey lovers from all walks of life. As Lima is quick to point out, even their previous partnership between Kim (who is Korean American), Lima and Auguste (who are both Black men) is representative of the platform’s larger mission of inclusion, especially when it comes to tastings.

And while COVID-19 has put a temporary halt to in-person gatherings, their team found success in partnering with liquor companies to host virtual events that were intentional in seeking out women and people of color in the craft liquor space. What’s more, with millions stuck at home and unable to go to bars and restaurants the way they used to, having a convenient online hub to gather in.

Auguste also points out that the success of their endeavor has everything to do with two different people coming together with the same goal in mind: to make imbibing fun and informative for everyone. In fact, Lima’s degree in education may have subconsciously laid a foundation for informing without being didactic. “There wasn’t really a safe space of people of color, women, and novices as well,” Lima says. “It was dominated by older white guys and by people who are taking it a little bit too seriously.” And so, Lima and Auguste are ushering in a new era — one where whiskey pairs perfectly with curiosity, respect, and a healthy amount of levity.

More like this
How to deal with racial microaggressions from your partner's family
By Melissa Pandika
How the CROWN Act can help fight racist hair discrimination at work
By Taneasha White
Sex workers deserve to eat well. And Meals4Heels delivers
By Lovely Brown
Stay up to date