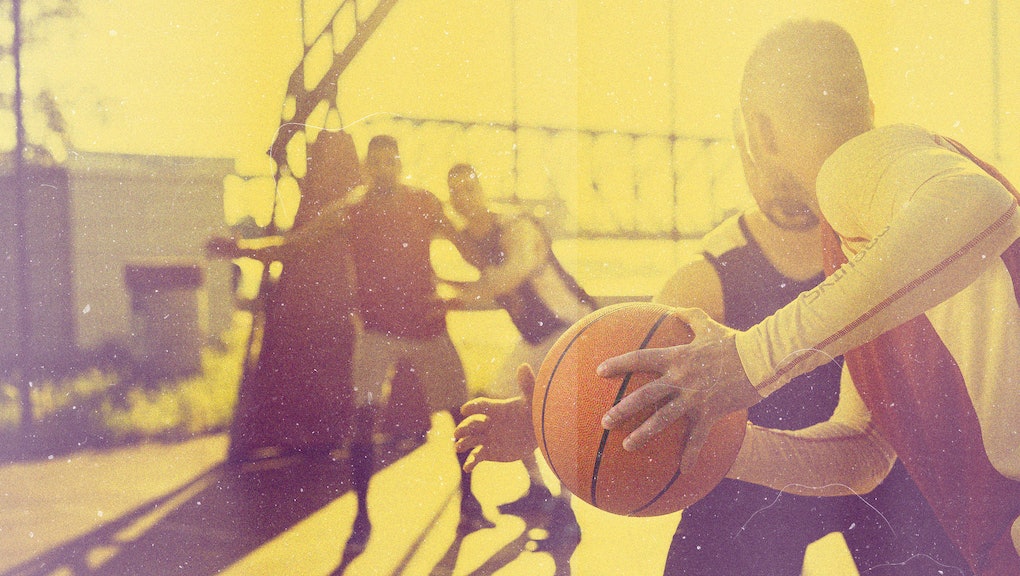 Back in 2010, two things lined up perfectly for Michelle, 30: she saw the movie Whip It, about an all-women roller derby team, and soon afterwards, learned there was an open skate event in her home of Madison, Wisconsin where women could learn to roller derby. Inspired to participate, she joined a local rec team; eventually, her group, Maiden Milwaukee, ended up winning the league championship. Like many other people in adult sports leagues, Michelle found herself reaping the benefits, from the focus on teamwork to the physical activity to the creation of strong, lifelong friendships.

“The entire sport of roller derby (or any sport, really) is based on women (or people) from all walks of life working together and getting back up after being knocked down,” Michelle tells Mic. “The physical action of carrying out this embedded metaphor is truly empowering.”

Kelaine Conochan, a spokesperson for the adult sports league community ZogSports, adds that there are countless perks to joining an adult sports team. “Playing in a league makes it easy to play a sport you enjoy, form connections with like-minded people, and get some healthy competition into your week,” she tells Mic. Since its founding in 2002, ZogSports has grown every single year, says Conochan, due to both increased registrations in already-established leagues and the company's expansion into new cities across the country.

Clearly, more and more people are discovering the benefits of sports programs, which range from softball teams to kickball leagues and feature members of all skill levels and backgrounds. If you're curious about joining a team, let Conochan and more experts explain why adult sports leagues can be so good for you — physically and mentally.

1. They help you make friends — or find romance

Last year, Jason, 29, of Hoboken, New Jersey, joined dodgeball and kickball teams through ZogSports. In addition to discovering that the sports helped break up the workweek, he found the teams to be "a great way to meet lifelong friends,” he tells Mic.

As Dr. Sanam Hafeez, a neuropsychologist and founder of Comprehensive Consultation Psychological Services in New York City, notes, factors like frequent career changes and complicated schedules can make it harder for adults "to meet people and bond with them as we did in our younger years." Joining a sports league, however, can help you get to know others in an easy, low-pressure way, since being on the same team is an automatic ice-breaker.

It's also a great way to get you out of the house, if you're typically introverted and struggle to make friends. Says Conochan, “Playing on a team ensures that you build meaningful relationships in real life, and step away from some of the insulating behaviors that are making it harder for people to connect."

In some cases, group sports can even lead to love. About a year after she joined ZogSports' indoor soccer league in San Francisco, Kylie, 35, met a teammate named Jeff; they started hanging out, and began dating not long after. Now, they're married. Not everyone will find romance through adult sports leagues, of course, but "you’re bound to find some connections on the court/field — you’re all out there for a common purpose to have fun playing a sport you love,” says Kylie.

2. They keep you physically active

The U.S. Department of Health and Human Services reported in 2018 that, to stay healthy, most adults need 150 minutes of moderate-to-vigorous aerobic activity each week, with two days focused on muscle strengthening activities. Joining a sports league that meets once or twice a week can be a great way to get in that exercise, especially for people who hate going to the gym or have trouble fitting in workouts otherwise.

“Everyone can dramatically improve their health just by moving — anytime, anywhere, and by any means that gets you active,” said Adm. Brett P. Giroir, M.D., assistant secretary for health, in the report. "When we move more, we have better cardiovascular health, we are stronger and less susceptible to disease, and we feel better."

3. They’re good for your mental health

According to Dr. Hafeez, “scans of the brain show us that activity spikes when we partake in cardio or H.I.I.T training" like team sports. During this kind of activity, she tells Mic, “our body produces more endorphins — which ignite positive feelings — and we tend to feel accomplished.”

An increase in endorphins, adds Dr. Hafeez, can help combat depression, feelings of failure, and stress. This idea was supported by a 2018 study in the journal Lancet Psychiatry, which found that among 1.2 million adults, those who regularly exercised had fewer days of bad mental health than those who didn’t. And those with the absolute fewest days of bad mental health? People who played team sports.

“It is not surprising to me that out of all the activities, team sports was highest on the list,” says Dr. Hafeez, noting that it was likely due to the amount of positive social interaction found in this kind of activity.

When you’re on a sports league, teamwork is the name of the game. “Playing on a team is deeply motivating because you really want to show up and play well, not just for yourself, but also for teammates who are counting on you,” says Conochan.

And this skill can translate to many other aspects of life. "Teamwork on the court teaches us how to work together off the court,” Dr. Joshua Klapow, Ph.D., clinical psychologist and host of The Kurre and Klapow Show, tells Mic. “As much as these may be ‘game skills,’ they are critical goal attainment skills that we need in work, in relationships, and in life.”

When you decide to pass to your teammate during a basketball game, it emphasizes the importance of working with others in your brain — a great tool to have next time you need to help your colleagues on a project or back someone up in a big meeting.

5. They increase your confidence

Even if you’re naturally self-conscious, rusty at the sport you’ve chosen, or intimidated by other team members, the more you play, the more confident you’ll become. As you go to more games and practices, “Your inhibitions will diminish and your confidence will increase,” says Dr. Klapow.

It helps that you likely won't be playing with total pros; Conochan notes that leagues are typically made up of players at the same level. “The last thing we want is for people to feel intimidated,” she explains. “We see what someone wants out of their group sports experience and make sure to find the perfect fit.”

Having teammates at your skill level can not only help ease your nerves, but also boost your morale. “There is nothing quite like the feeling of a high five from a teammate when you do something well," says Conochan. "These positive interactions are so ingrained into team sports and they naturally help build confidence.”

6. They give you a break from adulthood

When your normal routine mainly consists of work and commuting, getting a break from "adulting" through an activity as fun and carefree as sports can be a huge relief. “Adult sports leagues provide a happy and stimulating social and physical outlet — not only to get some needed time (perhaps outside) with people — but to take a break from all those responsibilities that swirl in your mental space throughout the day,” says Dr. Hafeez.

Sports force you to be in the moment, not checking Instagram or fretting over what happened at work earlier that day. “When you are playing a sport... it doesn’t matter what is going on in the rest of your life — you don’t have time to think about a text or a social media post,” attests Michelle. “All your attention is on the game; if you blink, you will be taken out by an opponent.”

If joining an adult sports league seems appealing to you, do some research; organizations vary from city to city, so it's best to search Google, ask on social media, or check out a site like Meetup.com to see what opportunities exist in your city. When you've found a league that seems good, “just sign up,” says Conochan. “And if you already love a particular sport, you need to just get out here and play already.”

More like this
Meet the weed activists giving fat joints to vaccinated New Yorkers
By Rajul Punjabi
Choosing the right weed strain for your vibe
By Melissa Pandika
Legal weed packaging is wrecking the planet. What are we going to do about it?
By Mark Hay
Stay up to date