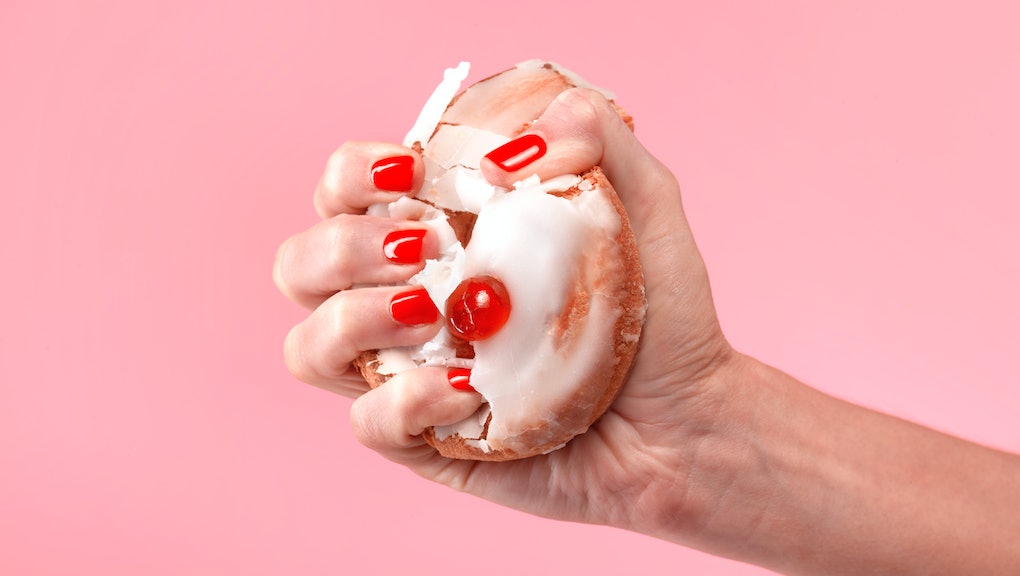 How anxiety and your diet are connected, according to experts

The baseline existential dread of the pandemic has made me more attuned than ever to my generalized anxiety disorder (GAD) symptoms. These days, I’m especially mindful about not only checking in with my therapist and refilling my medication on time, but also about my intake of caffeine, booze, and foods I have trouble digesting, all of which seem to worsen my anxiety.

For the past several years, researchers have also been interested in the connection between what we eat and how we feel. Along the way, anti-anxiety diets have emerged, along with lists of foods to eat and avoid to keep anxiety at bay. Ever the skeptical health journalist, though, I wonder whether we have enough evidence to conclude that certain foods can increase or decrease anxiety. Can you really manage your anxiety through diet?

According to the experts I interviewed, the general idea that what you eat can impact your anxiety levels is consistent with the research so far. But they caution that the effects of specific foods on anxiety aren't entirely clear, and they remain wary of broad recommendations about what to eat and what to avoid in order manage anxiety. Last but certainly not least, remixing your diet can’t replace therapy or medication.

“Quite a bit of research” shows that staying hydrated and following a balanced diet, with minimal caffeine and alcohol, can affect mental health, says Sarah Adler, a clinical associate professor in psychiatry and behavioral science at Stanford Medicine. We know caffeine is a stimulant, while alcohol can cause a rebound in anxiety following the short-term relief it provides, and it disrupts sleep, which “really primes your body to be more anxious.” We also know your body metabolizes the complex carbs in whole foods slower than the simple sugars in processed foods, which helps stabilize your blood sugar, creating an overall sense of calm.

This is consistent with what we know about the trajectory anxiety tends to follow: it feeds on itself, growing until it plateaus, then resolves, says Petros Levounis, professor and chair of the department of psychiatry at Rutgers New Jersey Medical School. “If you sustain this curve, meaning, if you stay with the anxiety, and your body experiences the plateau and the resolution, it teaches your body little by little, there’s light at the end of the tunnel,” he explains. "Your anxiety gets a little better."

Aborting your anxiety, though — not only by physically fleeing the source of it, but chemically, by consuming alcohol or processed sugar, for example — makes this lesson harder for your body to learn, worsening your anxiety in the long run. These ingredients have an immediate, satisfying effect on your central nervous system. Complex carbohydrates that take time to digest allow you to sit with your anxiety.

Beyond healthy eating guidelines, though, a vast amount of literature has surfaced about the gut-brain connection, Adler tells me. Your gut, a.k.a., your intestines, “has something like 100 million neurons, and those neurons help you produce neurotransmitters,” including “feel-good” neurotransmitters like serotonin. "Whether [the neurons are] firing properly is highly influenced by what's inside your gut." Specifically, the balance of the bacterial community that inhabits in your gut — your gut microbiome — “plays a really important role in the function of those neurons."

And now, scientists are just beginning to understand how specific nutrients might directly affect anxiety. An analysis of human studies associated treatment with omega-3 fatty acid, found at high levels in fish and seafood, with reduced anxiety symptoms. Adler cites studies that have demonstrated, for example, that diets low in magnesium increase anxiety-related behaviors in mice, suggesting that magnesium-rich foods like chard, nuts, seeds, and whole grains “can potentially have an impact on anxiety.” Some foods with possibly anxiety-lowering properties have been shown to increase the release of “feel-good” neurotransmitters like serotonin and dopamine. The results are preliminary but promising.

Some anti-anxiety diets are based partly on the theory that links anxiety to inflammation, and call for eliminating supposedly pro-inflammatory foods like sugar, while upping your intake of anti-inflammatory foods like turkey and turmeric, for a few weeks. Indeed, "anxiety is generally thought to be correlated with a lower inflammation state,” Adler says. But “I think I would be really mindful of telling to people to cut out things.” Anxiety is associated with disordered eating behaviors, so heavily restrictive diets might make you more susceptible to them if you already struggle with anxiety.

Adler also cautions against making “blanket recommendations for everyone,” since responses to specific foods vary from person to person. Instead, she advises being mindful of how different foods make you feel, not just in the moment, but the next day, as well. Maybe cut out a category of food, like processed foods, for a period of time, with the intention of noting how you feel. Then, gradually reintroduce them, asking yourself if you feel any differently when doing so. This way, you can identify specific foods within a category that affect your anxiety.

Particularly if you have an anxiety disorder — anxiety that impairs your ability to function as opposed to a healthy response to a stressful situation — you don’t want to address it solely through diet. “It’s concerning to think that somebody may rely on choice of food to treat bona fide psychiatric disorders while we do have treatments that have been scientifically proven to help,” like medication and therapy, Levounis says. If you have an anxiety disorder and want to experiment with your diet, he suggests speaking to a nutritionist or primary care doctor, but without neglecting tried and true treatments.

Adler believes therapy would ideally include talking about other factors related to emotional well-being, such as diet and exercise. “Managing your diet is a part of managing your anxiety,” she says. After all, any self-sabotaging habits you engage in beyond therapy can undermine the hard work you do within it. Rather than directing you to change your diet in a certain way, it can give you an understanding of “all the levers you can pull to help you reduce your anxiety.”

The idea of diet as one of several tools to manage anxiety really resonates. Personally, I'll stick to my healthy-ish diet, along with therapy and medication, without getting too caught up in whether I should be eating X or Y and focusing on what makes me feel good.

This article was originally published on Jan. 22, 2021

More like this
Can delta-8-THC get me high without the anxiety?
By Melissa Pandika
Margarita burns: Why lime juice and sunshine don't mix
By Melissa Pandika
Is the Pegan diet really worth all the effort?
By Tracey Anne Duncan
Stay up to date