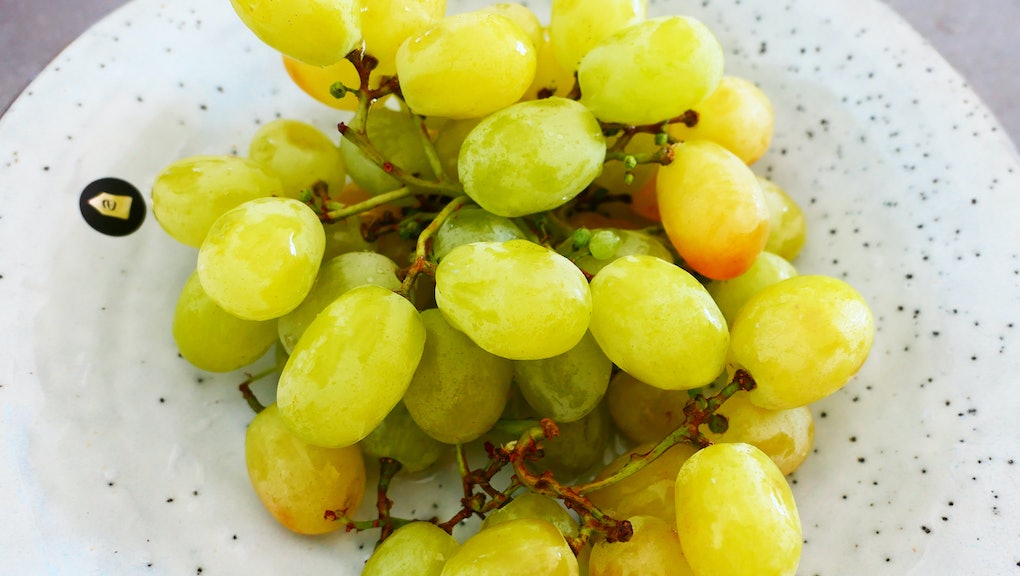 How are Cotton Candy grapes made? The mad science behind the curiously delicious designer fruit

Biting into Cotton Candy grapes feels like having a crush on a cartoon character as a kid — a little weird, but somehow, right. They somehow embody spun sugar, but in the form of plump, juicy morsels. I fell hard and fast for them. When I brought some home from Trader Joe’s last night, I couldn’t stop popping them into my mouth (despite definitely being full on tacos). In fact, I’m noshing on frozen Cotton Candy grapes as of this writing. (Frozen, they taste a bit like strawberry sherbet.) Major grocery stores, like Trader Joe’s, Sam’s Club, and Publix, carry them, typically from around August to October, so if you haven’t tried them yet, do yourself a favor.

What wizardry could imbue the humble grape with such a whimsical flavor? To find out, I asked the wizard himself, David Cain, co-founder of International Fruit Genetics (IFG) in Bakersfield, California, who led the team that developed the Cotton Candy grape. He tells me his team didn’t even set out to create a grape reminiscent of the county fair confection. And the scary delicious flavor doesn’t even come from genetic engineering or artificial flavoring, as I first suspected. Cotton Candy was just the serendipitous result of breeding East and West Coast grape species using traditional methods.

Pretty much all table and wine grapes belong to the Vitis vinifera species, which is native to Europe and the Middle East, and cultivated in California, Cain explains. California grapes are seedless, with a relatively thin skin and firm flesh.

Cain grew up in Maine, among grape varieties that belong to the Vitis labrusca species, which are bred mostly in the eastern US and boast a richer array of flavors. The Concord grape, used to make jelly and juice, is a V. labrusca variety; many describe its flavor as tart and musky.

The problem is, Concord grapes contain seeds, and their tough skins pull apart easily from the flesh. As a result, the sugar and flavors are concentrated near the skin, while the center is fairly acidic. “The flavor is nice, but the grape isn’t particularly pleasant to eat,” Cain says. “We’re trying to pick the flavors out of [V. labrusca] grapes and put them in a better eating quality grape.” In other words, Cain’s team sought to breed a V. labrusca variety with a seedless V. vinifera variety in hopes of yielding a grape with the tasty flavors of the former and pleasant mouthfeel of the latter.

Shortly after co-founding IFG in 2001, Cain decided on a V. labrusca variety from a University of Arkansas collection as the “father;” it gives Cotton Candy most of its prominent flavors, which some have likened to toffee, burnt sugar, and vanilla. Cotton Candy’s “mother” is a seedless California V. vinifera variety with a mild, sweet Muscat flavor.

To breed the two, Cain and his team undertook the tedious task of plucking the pollen-producing parts from the flowers of the V. labrusca “father” and V. vinifera “mother.” They then placed the pollen-producing part from the “father” in a flower from the “mother,” causing small fruits, or embryos, to start growing. When the embryos neared maturity, they picked and grew them in test tubes in a lab. (If they had seeds, the embryos would have fed on the starches inside the seed, but since they were seedless, they needed to rely on food supplied to them in test tubes.)

The roughly 100,000 embryos resulted in around 10,000 plants, which Cain and colleagues ultimately winnowed to just one, a process that can take around a decade. When Cain first sampled grapes from this plant (which contain more sugar than typical green grapes, per the Wall Street Journal), he recalled toffee. The team gave their creation to staff members for their children to sample; the kiddos said it tasted like cotton candy, hence its name, of course.

“We weren’t quite sure that it was something the general public would like because it’s kind of an unusual flavor,” Cain says. Initially, IFG rolled out Cotton Candy grapes only to small, high-end specialty supermarkets around 2013. They’ve since expanded their availability as their acreage has grown. Now, “it almost seems like it has a cult following.” (IFG has created other varieties with fanciful flavors, like grape Kool-Aid and strawberry, but they haven’t taken off quite like Cotton Candy.)

Lucky for us fiends, IFG has expanded its Cotton Candy growing operations, with plantings not only in the Bakersfield area, but also in Mexico, Chile, Peru, and Brazil. This way, even after the growing season ends in California, you could still get your hands on them; they would just come from Latin America. “The thing we’re trying to do is get a year-round supply,” Cain says.

It was already love at first bite between Cotton Candy grapes and me, so the possibility of cozying up to a bowl of them whenever I want sounds like a designer fruit dream.

More like this
Steak-umm, the social justice warrior no one asked for, tweets fire once again
By Joseph Lamour
Sex workers deserve to eat well. And Meals4Heels delivers
By Lovely Brown
This white woman called herself the Queen of Congee for “improving” a 3,000-year-old Asian staple
By Joseph Lamour
Stay up to date