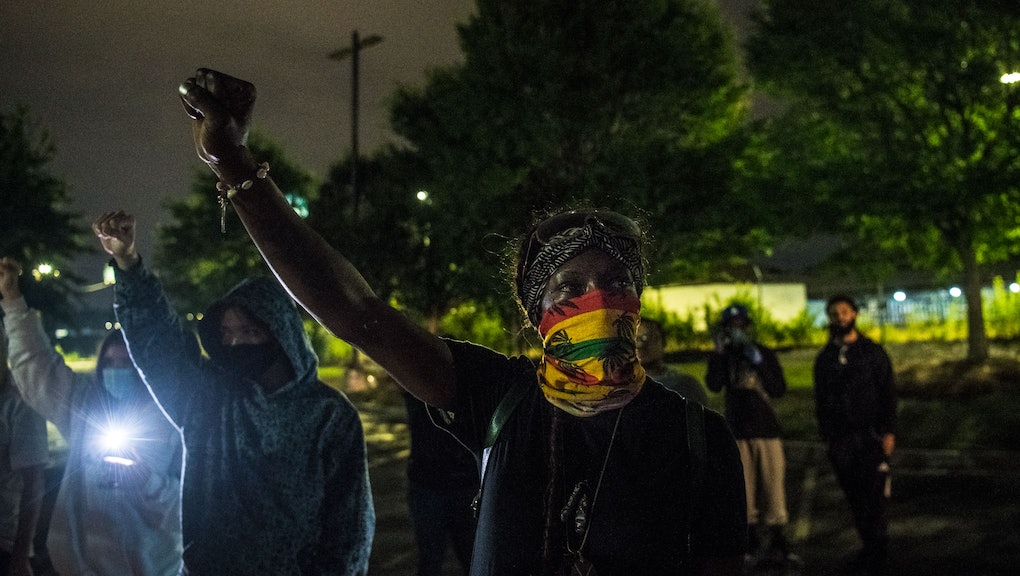 Protesters in Atlanta in June. [Photo by CHANDAN KHANNA/AFP via Getty Images]

How Black anarchists are keeping the protest movement alive

With a series of uprisings gripping the United States, President Trump has not hidden his disdain for protesters. Beyond his threats to Minneapolis protesters and questionable executive orders, Trump has time and time again directed his ire at one particular group: "anarchists." Trump's constant invoking of anarchists to describe all protesters generally is a calculated attempt to delegitimize ongoing struggles — that much can clearly be seen in one of Trump’s tweets from earlier this week, where he wrote that protesters in Portland and Seattle were "actually ... sick and deranged anarchists and agitators."

The immediate knee-jerk reaction to Trump’s baiting is to often argue that the people taking to the streets in Portland — a city that has been under siege by mysterious federal agents — and Seattle are merely "protesters" and not "anarchists." But remember the old saying: A broken clock is right twice a day. Trump may not be honest in his portrayal of anarchists, and he certainly does not have a clear view of the ongoing protests, but to deny anarchists' presence altogether would be just as bold of a lie as the president's.

Anarchists have been involved in protests across the country since the current social justice movement began in May. Rather than deny that anarchists exist, it’s more useful to acknowledge that in the middle of an insurrection summer best defined by a pursuit for Black liberation, Black anarchists are key to sustaining many of the ongoing uprisings. And while Trump may be out to scapegoat anarchy, Black anarchists are not allowing the president to scare them away from the work that has to be done.

Part of Trump's invocation of anarchism depends on the broader American public's ignorance of the term overall. Often, people are only familiar with anarchism in the form of entertainment like V for Vendetta, or imagine "anarchy" just as something that disaffected white people do. In the American imagination, anarchy is nothing more than chaos for chaos' sake, detached from any political analysis or meaningful struggle for liberation.

But in Teen Vogue, labor journalist Kim Kelly defined anarchism as "a radical, revolutionary leftist political philosophy that advocates for the abolition of government, hierarchy, and all other unequal systems of power." What it means to be a Black anarchist can look different from person to person. But Riley, who is part of Salish Sea Black Autonomists and organizes between Seattle and Olympia, Washington, said it has helped them articulate what is going on in the world in order to better confront it.

"The anarchist critique gave me the tools and language to better see and understand my enemy and understand why and how the world is structured against me and my people," Riley tells Mic. "But more importantly, anarchy gives me weapons and says, 'Don't wait for some future utopia, but live and fight right here and right now.' It tells me not to be the capital or foot soldier for another's project."

Riley continued: "To me, being a Black anarchist is about fully embracing the life that is denied to us and living it in total conflict with the forces and structures that subjugate, exploit, and kill us — the state, the police, borders, capitalism and the economy, work, etc." (Riley declined to provide their last name.)

For many Black anarchists, a commitment to radical politics also means putting community and care at the center of their own personal definitions. Makayla, an organizer from Philadelphia, tells Mic, "[Being a Black anarchist] is working to develop non-hierarchical communities and building mutual aid outside the colonial white supremacist structures. It is finding ways to heal people from state violence and learning ways to sustain ourselves as a people."

Similarly, Tina, who is located in Dallas, Texas, says, "I think being a Black anarchist can mean many things. But for me, it means having my cake and eating it, too. It means as a queer Black woman that my liberation is everything and that I am willing to die for that no matter the cost. Because I love liberation more than my own life." Both women declined to provide their last names.

Black anarchists are not surprised by Trump’s continued baiting. For Tina, it harkens back to the Red Scare that grew particularly intense in the 1940s and early 1950s. During that period, the label "communist" was thrown around as haphazardly as Trump's use of "anarchists," with former Sen. Joseph McCarthy even forming the House Un-American Activities Committee to investigate communism within the United States. McCarthy’s campaign dealt devastating blows to the Black freedom struggle.

"Trump labeling protesters as anarchists is another form of white supremacy at work," Tina said. "Blackness is already anarchy in white folks' minds. I don't think a Black person necessarily has to call themselves an anarchist to be one, because in the land where whiteness is law and order you are already one."

Riley says it's too early to know the full effect of Trump's targeting, but "I know for sure there is going to be an intense crackdown on anarchists, probably on a level we haven't seen since the [Earth Liberation Front] was active in the early '90s and 2000's. Grand juries, federal indictments, house raids, informants, the works." However, Riley pointed out that on the streets, Trump's commentary may actually inspire a pro-anarchist side effect similar to what happened in Spain in 2015: After a counter-terrorism operation against anarchists prompted public backlash, people used the viral hashtag #ITooAmAnAnarchist to express solidarity.

Trump’s logic of anarchists being troublemakers also relies on the popular "outside agitator" narrative. The phrase came up early in the summer with Hennepin County officials in Minnesota blaming unrest in their city on people who live outside of the state. Later, an investigation by the local NBC affiliate station found that the vast majority of those arrested were, indeed, Minnesotans.

The "outside agitator" narrative isn’t troubling just because of a few instances where officials were obviously wrong in deploying it, but also because it has roots in quelling dissent throughout history, from plantation owners in the South to massive corporations and beyond. The Twitter account Midwest People’s History, an "ongoing chronicle of moments when ordinary people got organized and made history," wrote, "Though the specific term 'outside agitator' didn't become popular until the Civil Rights Movement, its sentiment was felt in the Antebellum South. In the wake of slave uprisings, 'outsider' accusations were often used by paranoid white slave owners to soothe their shaky nerves."

The presence of Black anarchists complicates the notion of an "outside agitator" — to describe anarchists as random white people outside of Black and otherwise oppressed communities is to erase Black anarchists — as well as the "peaceful" protester narrative that others try to conjure to oppose Trump. But why is there an obligation to be peaceful if you are dying? The reality is that there are Black anarchists who burn and loot, and it is not the ultimate sin some have tried making it out to be. Following the protests in Ferguson, Missouri, in 2014, Vicky Osterweil wrote "that for most of America's history, one of the most righteous anti-white supremacist tactics available was looting. The specter of slaves freeing themselves could be seen as American history's first image of Black looters."

In addition, Osterweil noted the problem with prioritizing and defending "property" in the United States. Namely, as Raven Rakia said, the term is racialized: "When property is destroyed by Black protesters, it must always be understood in the context of the historical racialization of property. When the same system that refuses to protect Black children comes out to protect windows, what is valued over Black people in America becomes very clear."

It is with this poignant reminder in mind that one should read a statement from Acting Homeland Security Secretary Chad Wolf earlier this month, where he said that "the city of Portland has been under siege for 47 straight days by a violent mob. ... Each night, lawless anarchists destroy and desecrate property, including the federal courthouse, and attack the brave law enforcement officers protecting it."

While Wolf makes strong claims, they do not capture the entire picture. Makayla identifies Black anarchists as "[being] on the front lines since day one," assisting other protesters by teaching useful organizing tactics. For example, one common — and vital — protest skill associated with anarchists is street medicine. These skills are vital during protests when the state is often the one harming people and calling 911 for medical assistance is no longer an option. Makayla added, "Even before the uprising, Black anarchists have been making sure the needs of the community are met while those needs were being ignored elsewhere."

"It's about building community and transformative justice models so that people actually heal and become better."

Riley offers a similar sentiment, crediting older trans anarchists with providing them housing when they were homeless after leaving an abusive situation as a teenager. The broader anarchist community also offered them food and clothing and helped them find a job. "I try to return the favor when I can, but if it weren't for the anarchists I'm sure I'd be dead by now," Riley says.

After the coronavirus pandemic began, many anarchists provided necessary aid to their neighbors to help them endure. Riley says that the community "stepped up to distribute food, masks, and hand sanitizer, as well as continued to do needle exchange." They also tell Mic that anarchists have been "continually ... writing to and supporting prisoners, bailing people out when we can, and of course pushing protests to be more conflictual."

Summer is far from over, and it seems that the same can be said for the uprisings. The work may look different depending on the city, but at the end of the day, Black anarchists are striving for a liberation that requires the total upheaval of social order as it stands now. And while Trump is likely to embark on many more social media tirades against anarchists, Makayla hopes people come to understand that anarchist tactics "require communication, trust, and compromise."

"It's about building community and transformative justice models so that people actually heal and become better," Makayla said. "We are more likely to want to bake cookies than light things on fire, but laying down to fascism and racism is complicity."

More like this
Supreme Court justices' political leanings: A guide to the 2021 court
By Vanessa Taylor
A Minnesota college professor raised $200k in Philando Castile's name. Where did the money go?
By Rafi Schwartz
Derek Chauvin's lawyers seriously just asked for probation instead of jail time
By Rafi Schwartz
Stay up to date