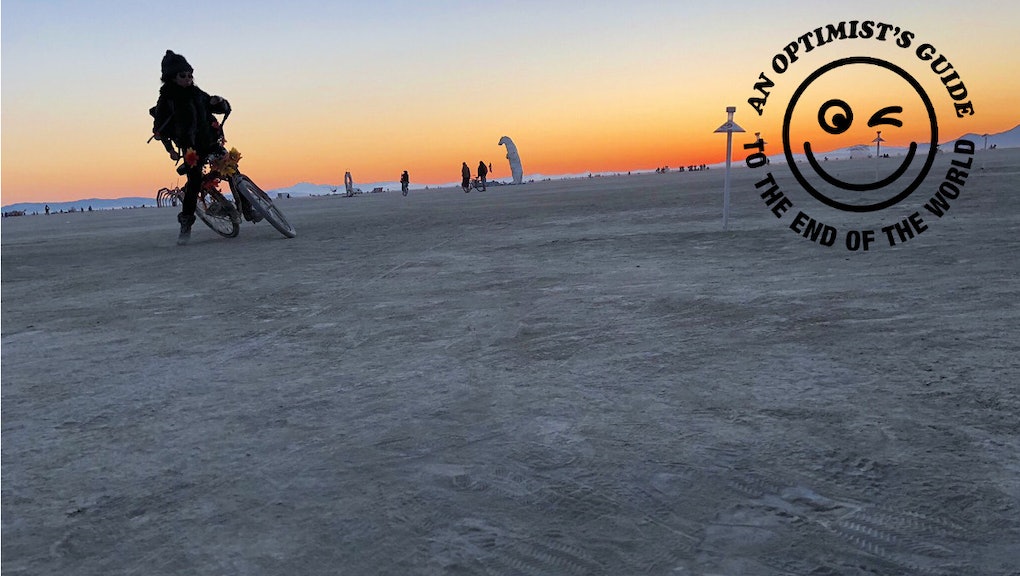 Photo courtesy of the author

How Burning Man taught me to party sustainably

This article is part of 'An Optimist's Guide to the End of the World,' a collection of stories aimed at disproving the idea that humanity is doomed.

When most people think of Burning Man, they picture tornados of dust flying into every orifice, wild uninhibited sexcapades at the orgy dome, and a twisted society where white people traipse around in tutus and shout about how currency is a farce. Burning Man certainly can be those things, but as I’m approaching my sixth burn I can safely say that I’ve also learned some valuable lessons that carry over into the world outside of the festival. While Burning Man is canceled this year due to the coronavirus pandemic, these are all lessons to remember whenever we begin to ease back into social gatherings.

MOOP—an acronym that stands for “matter out of place”—can be anything that litters the surface of the playa floor. The playa is the dusty moon-like surface that houses Burning Man aka Black Rock City. The main point of Burning Man is to create a temporary city, and then leave no trace of that city once the week is complete. That includes but is not limited to: cigarette butts, water bottles, urine (so yes if you pee on the playa you’re the worst), loose feathers, and glitter. Each camp is held accountable for its MOOP count and if they receive a bad MOOP score, that camp simply will not be invited back by city organizers. You would of course still be able to attend the event, but your camp/community would have to sort out new accomodations.

This “Leave No Trace” mindset (one of the “10 Principles of Burning Man) keeps everyone accountable for where they toss their trash. Catch me on the playa with a giant ziplock bag picking up MOOP that I take back to my camp to dump. It’s not exactly fun, but it’s important. Kind of like all acts of sustainability.

This way of being has now bled into my day-to-day partying. I’m not ashamed to pick up other people’s trash at the club or rave. The “not my problem” mentality just doesn’t cut it. If it’s not your problem then it’s no one else’s problem either.

Burners are urged to bring their own reusable items to Black Rock City to prevent MOOP and decrease the amount of trash going out of the city at the end of the week. That includes a reusable cup that can be used to sip dusty coffees in the morning, hot soup at night, or cocktails at one of the hundreds of bars (which do not take money for their services) in the city.

We live in a ghostly world haunted by single-use plastics. Humans produce over 300 million tons of plastic annually, and 50 percent of that is for single-use purposes. My new favorite rule when hosting a party is to request partiers bring their own cups to keep from buying plastic ones. Collapsible cups work out really well so you’re not sitting on the subway with a bedazzled goblet sticking out of your bag. Unless that’s your thing. In which case, shine on.

Black Rock City preaches “Leave No Trace,” which means that whatever trash each camp accumulates is also leaving with them. So it’s in everyone’s best interest to pack as lightly as possible, and bring only things that they’ll really need.

Trash organization at Burning Man is a great place to learn about trash organization in your own home. Especially when you live in a party house. Staying on top of recyclables and compost and minimizing trash accumulation from the jump is a great way to make sure your house isn’t a landfill come Sunday. Asking party guests to participate by emptying the trash if it gets full is another way to hold party guests accountable for their actions so they’re not just using your house as an event space.

This is something that I didn’t learn at Burning Man, but the festival reminded me that communication truly wins every time. Not everyone is going to be as environmentally conscious as you, and that’s okay! We all have things to learn from each other, and we learn a lot through our own party habits. It’s important to express our values if we want others to respect them.And even though no one wants to come off as a buzzkill for demanding no single-use plastics, communicating the need for sustainable partying is huge.

More like this
7 climate podcasts to help you make sense of the future
By AJ Dellinger
Pandora, the world's largest jewelry company, will no longer use mined diamonds
By Vanessa Taylor
Eating meat is killing people, but not in the way you think
By AJ Dellinger
Stay up to date