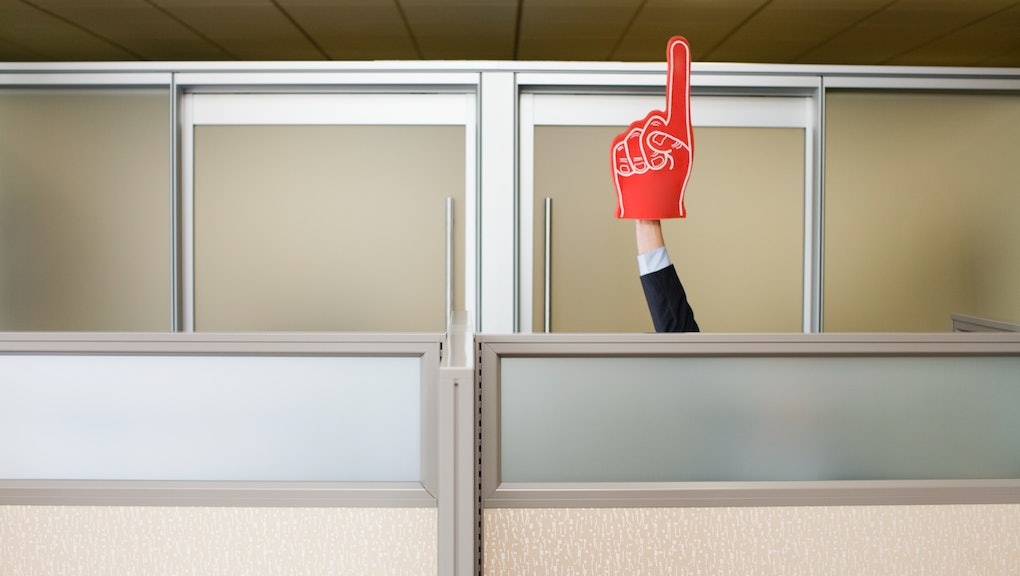 How career envy can help and hurt you

Forbes recently released its 2019 30 Under 30 list of wunderkinds in 20 industries — including my own, media — sending me into a spiral of career envy. A 28-year-old titleholder’s stories on #MeToo have graced the cover of Vanity Fair, while another became the youngest person to be nominated for an Emmy at age 26.

At 32, I have yet to land a cover story, much less a national award nomination. Although I know I’m “supposed to” support my peers, I can’t help but feel inadequate, and more than the tiniest bit salty. I asked psychologists to break down why we feel this way when a peer outperforms us, and what we can do about it.

Envy is basically “admiration with a bit of hostility thrown in,” Mary Lamia, a California-based psychologist, tells Mic. While we might admire a 30 Under 30 honoree, or a colleague who got promoted instead of us, we might not want them to have the success we lack. Yet she and others note that, like any emotion, envy isn’t “good” or “bad,” but merely informative. Tuning into what our envy is trying to tell us can allow us to move forward by helping us reframe our feelings of inferiority, or draw on them for motivation.

Envy is not only a natural emotion, but an ancient one, stemming from a dominant-submissive dynamic between the envied and envious, seen even in other species, explains Ross Buck, a professor of communication and psychology at the University of Connecticut. It might have given early humans an evolutionary edge; if someone threatened their survival or social status, envy could allow them to get rid of that person or somehow maintain their position, Lamia adds.

Tuning into what our envy is trying to tell us can allow us to move forward by helping us reframe our feelings of inferiority, or draw on them for motivation.

The painfulness of envy is essentially “an alarm signal" that we're not in a "good" position in a given situation in our lives (the workplace, for instance) compared to another person relevant to that situation (a coworker) — and that we need to do something about it, says Yochi Cohen-Charash, a professor of psychology at Baruch College & The Graduate Center, CUNY.

For instance, the envy triggered by Forbes’ list might make us think we’re not as good as we thought we were, or that we’re not where we should be in life, especially in light of societal expectations that people should make some sort of professional breakthrough by the time they hit 30. The scarcity of spots on such a list creates a zero-sum game that can also intensify envy.

This scarcity mentality can pervade the workplace too, especially among women and members of other groups that tend to be marginalized in professional spaces, per The Atlantic. “It’s hard to be happy about the success of someone else if you think there’s not enough to go around,” Lamia says. Companies can profit from fostering this mindset, she adds, since it incentivizes employees to toil away for only modest rewards.

At its core, though, envy is a shame response, Lamia says. As a result, envy, like shame, can lead us to attack ourselves or the object of our envy, or avoid the emotion altogether. Ultimately, these responses can prevent us from turning our focus inward and learning more about ourselves. While we often consider envy “negative,” Buck doesn’t believe in negative emotions. “Emotions are natural,” he says. “They are signals from our bodies. We need to listen to them… and accept them as they are and realize they are trying to teach us something.”

The first step in dealing with professional envy, then, is admitting to yourself that you feel it without beating yourself up.

The first step in dealing with professional envy, then, is admitting to yourself that you feel it, without beating yourself up, and sit still with it long enough to listen to what it’s telling you, Lamia says. Maybe it’s cluing you in to what you want, or nudging you to work harder.

Next, reframe the situation, and question your underlying assumptions about what a peer’s raise, book deal, or other achievement really means. For instance, we might envy the happiness we imagine it brought them — but we don’t know for certain if they’re happy, Lamia says.

And maybe they’re outperforming you only in this situation, Cohen-Charash adds; you could be better off than they are in another context. Also question whether a particular achievement is a true indicator of who you are or what you can do. In the case of a 30 Under 30-type list, Cohen-Charash suggests reminding yourself, “It’s only a list. It’s not a promise. It’s not a fact about the future.”

Use their success as motivational fuel.

Also, just because your coworker got promoted, and you didn’t, that doesn’t mean you never will. Challenge the scarcity mindset that so often surrounds success, and think to yourself, if they got promoted, you can, too — maybe you just need to work harder, or try a different approach, Cohen-Charash says. Use their success as motivational fuel.

On the other hand, if you notice your employer tends to promote only people they're close to, regardless of performance, you might want to work elsewhere, Cohen-Charash notes. In general, if the outcome of the situation feels out of control, no matter how hard you work or how much you improve, maybe consider leaving the situation. Reflect on why you long for something you can’t have, and what you can feasibly attain, Lamia adds. You may never make $10 mil, but you can achieve other things that make you feel accomplished.

I’ve made peace with the possibility that I may not even score a spot on a 40 under 40 list, or any list, for that matter, and I realize that just because a peer inks a book deal before I do doesn’t necessarily mean they’re more talented. After the initial sting of envy fades, I remember that I'd gladly write every day, even if I were to never receive "official" recognition for my work, a privilege I'd prize more than any accolade.