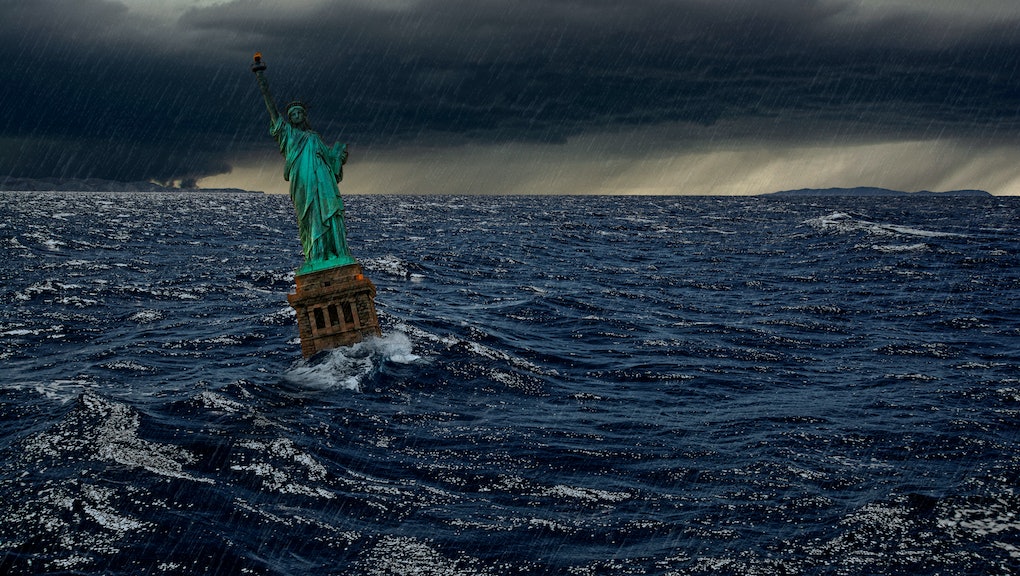 In 2004, the blockbuster movie, The Day After Tomorrow, starring Jake Gyllenhaal and Dennis Quaid, hit screens worldwide. In the film, the world’s ocean currents somehow stop, which results in higher temperatures in the tropics and a cooled Northern Atlantic. Naturally, a cataclysmic storm forms, and the film’s protagonists find themselves in the middle. While based on the real theory of “abrupt climate change,” the science is a dramatization for cinematic purposes — a worst-case-scenario climate fiction. But, the lessons are the same. Cities in the United States are not prepared for the radical effects of climate change and catastrophic weather events that come with it.

In the 15 years since The Day After Tomorrow was released, the U.S. has seen some generation-defining storms. There was Hurricane Katrina in 2005, which devastated New Orleans; and two weeks later Hurricane Rita, in the Houston area, which prompted the largest full-scale evacuation in American history. We continue to see wildfires from California to Texas; polar vortexes in the northeast, and floods covering Miami’s city streets.

The specter of cataclysmic environmental events has led to a growing need for fiction to help us conceptualize our changing planet. And the genre of dystopian climate-based fiction has helped both readers and educators put the effects of climate change into context.

A genre that translates climate science into stories that help paint the picture of how climate change will affect our communities at large is a much-needed tool — something that former newspaper reporter Dan Bloom recognized.

In 2011, Bloom was working in public relations and marketing for a sci-fi novel, Polar City Red by Jim Laughter. The book is set in Alaska, in the year 2075, with a strong climate change theme. In press releases promoting the book, Bloom called it a “Cli-fi” thriller. “The term caught on,” Bloom explains to Mic. “There are now hundreds of cli-fi courses at community colleges and major universities in the USA, U.K., and Australia, largely in part to how Margaret Atwood helped propel the genre.”

Atwood has become a major figure across the cli-fi literary universe. She not only helped the term catch on when she tweeted it in 2012, but her 2013 novel MaddAddam has been a popular teaching tool which largely summarizes the need for the genre in the first place. The book tells the story of a group of environmentalists, known as the gardeners, who rebuild the world after a global pandemic. The novel shows how fragile our global systems are. “People need such stories, because however dark, a darkness with voices in it is better than a silent void,” Atwood writes. The book was part of the curriculum for a course on cli-fi at Brandeis University in 2015.

Another notable book in the genre is Omar El-Akkad’s The American War. The book was listed as required reading in a 2018 freshman-level course entitled “Narrating Climate Change” at New York University. The 2017 novel is set in America’s second civil war when southern states defy a law that outlaws the use of fossil fuels. The book is told through the lens of Sarat Chestnutt, who is from Louisiana and is displaced by the rising waters of the Mississippi River. El-Akkad shows the life of an American climate refugee.

“Cli-fi” literature is starting to catch on in K-12 education, too. Places like Connecticut and Portland, Oregon are passing laws that would require climate change to be taught as part of the curriculum in public schools — which would include the use of “cli-fi’ literature in English classes.

With the effects of climate change looming, it only makes sense that we'll need more ways to help us understand how our world is changing. We need tools that speak to us beyond the science textbook, which for some, just might require a deep dive into the world of fiction.

More like this
What cities will be most affected by climate change?
By Vanessa Taylor
Google Earth's new Timelapse feature is a rude awakening for climate skeptics
By AJ Dellinger
The ocean is about to swallow a climate research facility, which feels fitting
By AJ Dellinger
Stay up to date