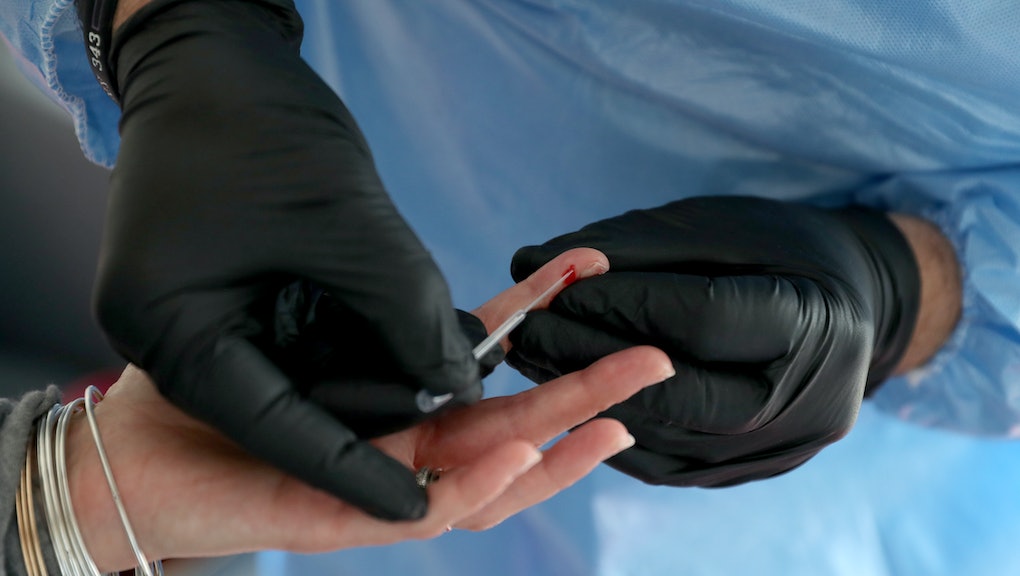 How coronavirus antibody tests could help us return to "normal" life

Amid the bleakness of the current pandemic, Anthony Fauci, director of the National Institute of Allergy & Infectious Diseases, delivered some hopeful news last Friday. In a CNN appearance, he said antibody tests for the novel coronavirus would be available within days, and that “a rather large number of tests” would roll out in about a week. These tests could indicate whether someone has been infected with the virus and has immunity to it, in which case they might be able to go back to work — crucial if they’re health workers on the front lines. The big hope is that antibody tests could help us safely, and strategically, resume normal life.

The New York Times reports that around 70 antibody test developers have told the Food and Drug Administration that their tests are good to go. But while we’d all love for them to fast-forward a return to normalcy, questions remain about their accuracy, among other issues.

Here’s what you need to know about them.

What are antibody tests, and how do they work?

Let’s start with what happens during an infection. When a virus or other pathogen enters your body, it triggers an immune response, a major part of which is the production of proteins called antibodies that recognize the invader, and help attack and kill it, says Elizabeth McNally, director of the Center for Genetic Medicine at Northwestern University Feinberg School of Medicine.

Within a week of infection, McNally explains, a type of antibody known as immunoglobulin M, or IgM for short, emerges. IgM “is the initial attack force,” Kyle Annen, professor at the University of Colorado School of Medicine on the Anschutz Medical Campus, tells Mic.

McNally notes that IgM levels climb and fall pretty quickly, and that immunoglobulin G, or IgG, antibodies show up within two to four weeks of infection. In contrast to IgM, "IgG tends to go up and stay up," she says. "It's more of a sign that you got through this, you have immunity. With other viruses, that’s the case, and that’s probably going to be the case here, too.”

She notes that with the novel coronavirus, you ideally want IgGs that bind to a specific region — the receptor binding domain — of the spike proteins that radiate from the virus. As The Scientist explains, the virus uses these spikes to latch onto, and enter, a person’s cells.

Using a blood sample, an antibody test for the novel coronavirus would “essentially identify whether a person that has been infected… has in fact made those antibodies,” Annen says. It could detect both IgM and IgG antibodies, although IgG levels would be more significant in indicating long-term immunity. Some tests that are on the way detect immunoglobulin A, or IgA, found in mucosal tissues, which may also play a crucial role in attacking the virus, the Times reports.

How accurate are they?

It’s complicated. Antibody tests would normally need to undergo a rigorous review process by the FDA, but in light of the pandemic, the agency “has basically said it’s ok to bring these tests out now without a formal preview process,” James Zehnder, director of clinical pathology at Stanford Medicine, tells Mic.

So how do you navigate this unregulated terrain? One way would be to look for a test developed by a clinical laboratory, which Zehnder says will probably be more accurate than one developed by a device manufacturer, since tests that come out of clinical labs need to undergo a rigorous validation process under what are known as CLIA regulations, which basically set standards for lab testing of human specimens, explains the Centers for Disease Control and Prevention.

Secondly, “the market is being flooded” with finger prick-based tests from device manufacturers, Zehnder says. These tell you whether the antibodies of interest are above a threshold amount, in which case you’d get a positive result, or below it, which would yield a negative result, McNally explains. They’re a little like pregnancy tests, Zehnder explains. But while they’re easy to use and give rapid results, “they tend to not be as quantitative and accurate as laboratory assays.” McNally adds that many use threshold antibody amounts based on information gleaned from China in recent months, which might not be the amounts we should be using.

If you suspect you might’ve had COVID-19, but receive a negative result from such a test, Zehnder suggests seeking a follow-up test from a clinical lab. Not only might this test be more accurate, but waiting to re-test might allow more time for IgG antibodies to become detectable. Remember, it can take a few weeks after infection for your body to ramp up IgG levels.

Annen adds that with tests set up to indicate whether someone’s had a disease, there’s a higher risk of false positives — testing positive for prior infection and immunity to the novel coronavirus, even if that isn’t the case. “That’s one of the biggest risks if we have a high false positive rate, sending people back to work even if they haven’t had it [COVID-19],” she says.

What are their other limitations?

Although antibody tests can be useful in telling us whether someone’s been infected with the novel coronavirus and mounted an immune response against it, “they can’t tell us whether someone is still currently infected,” Annen says. And again, if you take the test before your IgG levels become detectable, you might get a negative result, even if you really were infected.

With tests set up to indicate whether someone’s had a disease, there’s a higher risk of false positives — testing positive for prior infection and immunity to the novel coronavirus, even if that isn’t the case.

Assuming that an IgG response does offer long-term protection — which hasn’t yet been proven for the novel coronavirus, Zehnder points out — how long it would do so remains unclear. “We don’t know for sure if anyone can re-get COVID,” Annen says.

How can they help us return to normal life?

In his interview with CNN, Fauci said immunity certificates were under discussion. STAT reports that they’re also on the table in the UK, Germany, and Italy. The implication is that people deemed immune can return to work while we await reliable vaccines or treatments, since it’d be assumed they’d be protected from infection.

But it’s hard to say to what extent identifying immune individuals will help reopen the country, since it’s possible that only a small percentage of people with an immune response will have measurable IgG levels, McNally says. “That’s not going to get everyone back to work.” That said, antibody testing could at least help identify frontline healthcare workers and other people in essential professions who can safely start working again.

On the other hand, if the tests reveal that around 50% of the US population has immunity, “that is a much more reassuring number to let people out and come back to work,” McNally says. At that level, “it’s harder for the virus to find people to infect.”

Can I get an antibody test?

“My understanding is right now they’re not very accessible,” Annen says. McNally notes that we’ll likely start seeing direct-to-consumer tests cropping up on Amazon in a few weeks, but again, keep in mind that they might not be rigorously validated.

She suggests looking for research opportunities that not only allow you to determine whether you have antibodies against the novel coronavirus, but also help scientists answer larger, population-level questions about it that can help curb its spread. The NIAID, for instance, has started recruiting participants for one such study, and regional data collection efforts will appear soon, too. McNally and her team are conducting one in Chicago that would allow people to use at-home kits and mail them in for analysis. “Keep your eyes open to find one that comes near you.”

More like this
A Hot Vax Summer is impossible when my family in India is still struggling
By Angel Kumari
A suicide safety plan saved my life. Here's what it looks like, and why it worked
By Kimberly Zapata
COVID-19 antiviral pills could be our reality by the end of this year
By Tracey Anne Duncan
Stay up to date