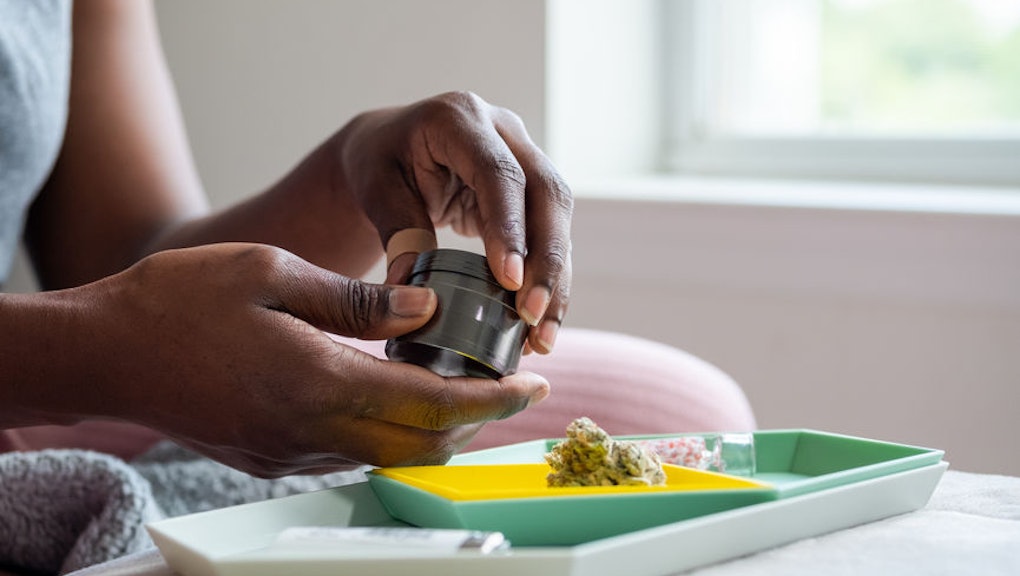 Passed on June 25, the legislation to legalize cannabis in Illinois takes meaningful steps toward repairing the harms caused by America's War on Drugs, which disproportionately targeted Black and Brown people for cannabis-related arrests and incarcerations. In a press conference, Illinois Gov. J.B. Pritzker touted the legislation — which takes effect next January — as “the most equity-centric law in the nation,” per the Huffington Post.

According to the ACLU, Black Americans are 3.73 times more likely than white Americans to be arrested for marijuana. Supporters of cannabis legalization have often upheld legalization as a way to alleviate the War on Drugs’ devastating impacts on communities of color. But as more states have legalized weed, racial disparities in the industry have persisted. As noted in a 2017 Marijuana Business Daily report on women and people of color in the cannabis industry, 81% of cannabis business owners and founders who responded to an online survey were white. Only 5.7% were Latinx, and just 4.3% were Black.

In Illinois, “equity loomed as a huge goal from the very, very start" of the legislative process, says Chris Lindsey, senior legislative counsel at the Marijuana Policy Project, who helped draft the state’s law. The legislation would expunge what could amount to an estimated 770,000 cannabis-related offenses, and promises that 25% of cannabis sale and licensing revenues will go toward a grant program to revitalize communities harmed by the War on Drugs.

The law also allocates funds to help people of color to cash in on the multi-billion dollar cannabis industry. A special development fund will subsidize licensing fees and provide low-interest loans for businesses in which at least 51% of the owners or employees (depending on the size) are people who have been arrested or convicted for cannabis-related offenses, have family members who have been, and/or come from communities disproportionately affected by poverty and the war on drugs. Illinois will re-evaluate these businesses before their licenses are up for renewal; those that fail to maintain this quota could lose their licenses.

According to Tanya Watkins, executive director of Southsiders Organized for Unity and Liberation (part of Illinois’ P.U.R.E. Cannabis Coalition to ensure racial equity in cannabis legalization) legislators worked with grassroots organizations to determine what the law should include. People like Sen. Toi Hutchinson and Rep. Jehan Gordon-Booth, explains Watkins, had "multiple community conversations to get a litmus test on what folks feel is the policy-driven manifestation of repairing those who have been harmed in the war on drugs."

Those involved in the law's creation focused on ensuring that it'd have a real impact on communities. “Making sure we don’t create new systems of oppression was important,” says Katelyn Johnson, executive director of BlackRoots Alliance, part of the P.U.R.E. Cannabis Coalition. To that end, Johnson and others looked to other jurisdictions, such as Oakland, whose equity program has drawn criticism for not offering enough funding to cover capital costs of cannabis entrepreneurs. Illinois’ low-interest loan program aims to prevent aspiring cannabis business owners of color from running into the same barrier.

According to Lindsey, Sen. Heather Steans and Rep. Kelly Cassidy, who sponsored the bill, were “very clear” about making it a gold standard of equity for other states. Because Illinois' law went through the legislative process (which gives stakeholders room to weigh in), rather than the more limited voter initiative process (which explains directly to voters how a law would work), “We had law enforcement and agriculture in the conversation,” Lindsey says. “We had an amazing amount of participation.”

But while Illinois voters are “already very serious about making sure this stuff plays out,” Lindsey says, whether the state's law will truly make reparations for the War on Drugs remains to be seen. To help evaluate whether the legalization is indeed equitable, Illinois will begin a study of the diversity of its cannabis industry once new dispensaries licenses are issued.

“While this policy is really good headway, we have so much work to do to make sure our intentions reach the impacted communities," says Johnson, adding that legalization in and of itself doesn’t amount to reparations. “That’s actually just the first step," she explains. "This is an ongoing process to repair decades and decades of bad policy.”

This article was originally published on June 28, 2019

More like this
Chuck Schumer's legal weed bill is actually pretty good
By Rafi Schwartz
Nancy Pelosi took a stand on the Jan. 6 committee, and it left Republicans whiny as hell
By Rafi Schwartz
Guess how much Trump's companies made during his presidency!
By Rafi Schwartz
Stay up to date