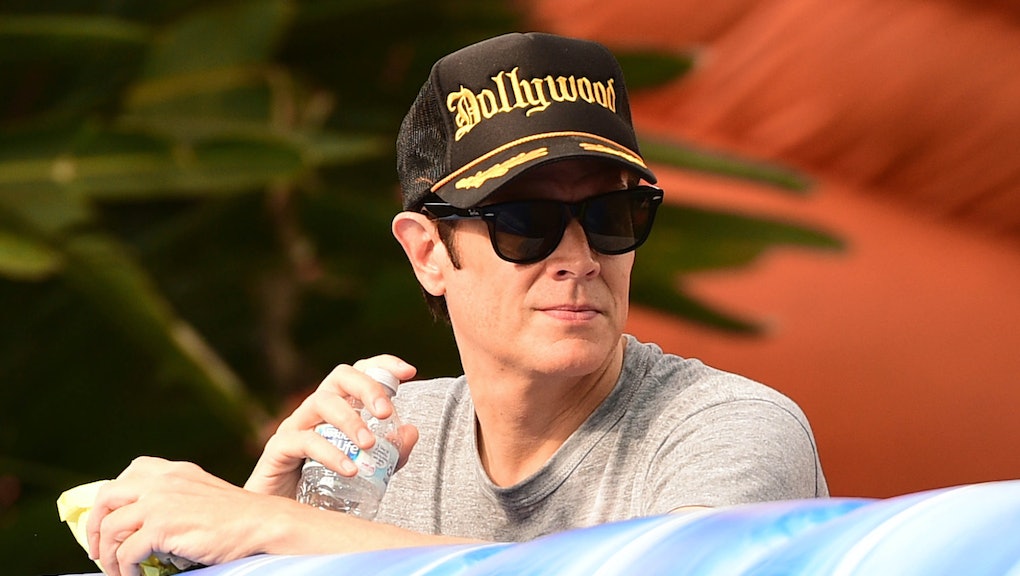 Johnny Knoxville is a somewhat unexpected silver fox in the accompanying shoot for GQ’s latest profile of the punk “half-ass stunt man,” as he calls himself, and “the craziest stuntman ever to fucking live,” as cast mate Steve-O conversely puts it. The profile of the infamous prankster has splashed its way through the internet sending waves of early aughts nostalgia through social media, while also creating a reckoning for millennials about just how old we, and the TV that raised us, really are now. What could have been a puff piece promoting the upcoming fourth and last Jackass film with involvement from Knoxville, ended up sparking acknowledgement of how powerful Jackass was in influencing the internet era we know today.

The profile’s writer Sam Schube reflects, “I cannot describe how powerfully it reordered my sense of what was funny; nor can I express how rapidly it permeated the fundamental grammar of my friendships.” And while it seems to have had that same profound effect on most millennials — whether actively, or just quietly in the subtext of all that spawned from it — it’s almost become a rarely referred to relic in our world where anyone can capture the absurdities of regular people on their iPhone for all to see.

As Knoxville begins what will be his final bow as a Jackass, the question dangles in the air of what the former cultural maelstrom of the franchise has to offer a world twenty years later where things like TikTok and Youtube have picked up where Jackass left off. We live in a world now where the internet is as entertaining as it is endless, as thrilling as it is disturbing, and it only takes one search or scroll through Instagram to see people hurting themselves in dangerous stunts. And yet really this final film will be reintroducing Jackass to a new generation that might not fully realize the origins of their own stunts and gags having a place in the cultural mainstream.

It will also be interesting to see, in today’s more easily triggered world, if the new Jackass film gets any pushback. During the original airing of the first Jackass season, then Senator Joe Leiberman campaigned to have MTV cancel the show after teenagers started getting hurt trying to recreate the stunts. The negative press led to MTV adding more oversight to the show, ultimately leading to Knoxville’s exit from the TV side of Jackass after just 24 episodes. But the freedom from network TV only emboldened the cultural phenomenon of Jackass to become a blockbuster juggernaut and span multiple spinoffs.

With the cast coming back to the big screen to cap off that original gravitas in their middle age, the return also ushers in a reckoning of the lifestyle that Jackass promoted, whether intended or not. Reaction gifs circulated to the GQ photos of Knoxville in shock that he is now fifty and looking as hip and healthy as ever — a grim comparison to the fact that not all Jackass alumni are still with us (beloved original cast member, Ryan Dunn, was killed in a drunk driving crash in 2011), and multiple others have publicly struggled with addiction since the show. Most recently, Bam Margera has been in and out of rehab, which led to his firing from the fourth film when he could not approach it soberly. Knoxville is thoughtful, but cagey in GQ telling Schube, “We want Bam to be happy and healthy and get the help he needs...We tried to push that along. I think that's all I really want to say about it.” He admits that they’re all adults responsible for their own actions, and always have been, but it’s hard to not draw attention to the more harmful long term effects of the kind of partying that Jackass relied on, and promoted, as an unintended side effect of their fame.

While the internet has certainly picked up where Jackass left off, nothing has ever seemed to capture the accessibility that Jackass provided, where the cast seemed as knowable as the bad boy class clowns who rode skateboards to school. Today’s viral stunt and prank videos rarely birth a star, let alone a series. The culture of physical shock entertainment no longer comes with the cultural commentary that Jackass seemed to subliminally provide. Without saying it, the show bucked the middle class white wealth boom of the early 2000s that many young people at the time were beginning to rebel against — and very little of the stunt/prank genre has been able to recapture that rebellion.

If a group of white men walked into a network pitch meeting today with a logline of “dudes doing the dumbest shit they can think of while hurting themselves often and badly,” they’d probably get laughed out of the room. The current entertainment climate is luckily (and slowly) moving to center more diverse stories and voices than those of white men and the ridiculous lines they, and only they, are typically allowed to push. In context of today’s media, something like the original Jackass would seem tired and maybe offensive in its flaunting of that privilege. But in 2000 it was actually a subversive kind of TV that bucked the boomer-centric norm that the young people of Gen X needed to button up and become a cog of capitalism like their parents before them.

In many ways, Jackass was an unintended answer to the fact that the youth at the time were part of the first American generation that stood to earn less than their parents before them. It allowed kids to see people getting rich and famous by staying a kid at heart, not growing up and into a cubicle. It was the punk rock of television. And after the pandemic just ushered in the largest wealth redistribution in human history in favor of the already wealthy, perhaps seeing our MTV elders kick each other in the balls with Chuck Taylors on once again is exactly what the doctor ordered.