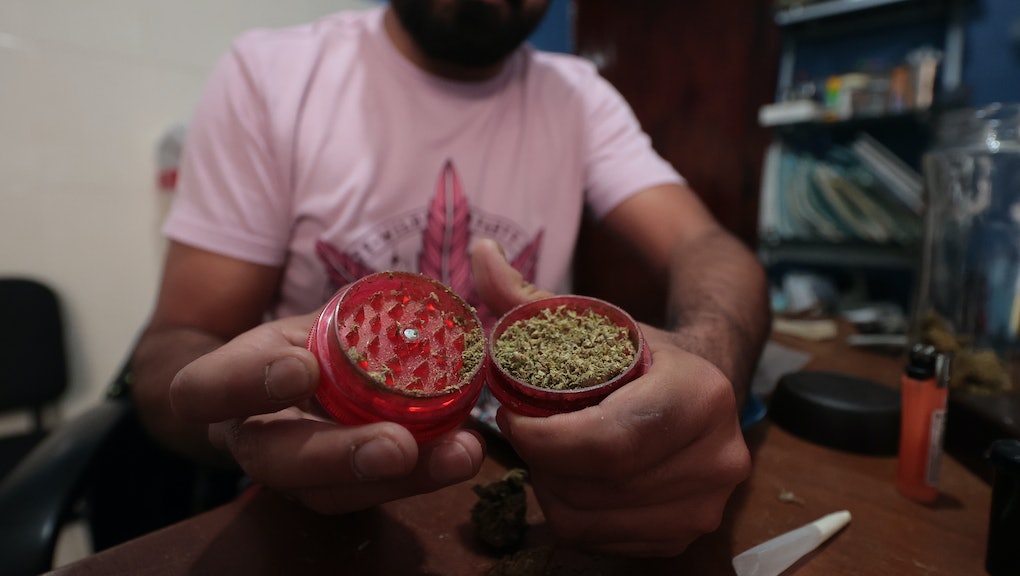 How Mexico's weed legalization could de-escalate the entire drug war

Mexico’s lower house of Congress in March handily approved a bill to legalize the recreational use of cannabis. The bill is now with the Senate, where it is likely to pass, as Mexican senators have previously voted to legalize cannabis.

If that happens, Mexico will join Uruguay and Canada in allowing people to use cannabis recreationally, albeit in more limited fashion.

Mexico’s bill would not outright legalize cannabis; it would raise the country’s existing threshold of nonpunishable personal possession from 5 grams to 28 grams. Possession of 29 to 200 grams of cannabis would result in a fine. After that, prison would still be a possibility.

Selling cannabis will still be a crime, meaning peasant farmers in the states of Sinaloa, Chihuahua, Durango or Michoacán who make a pittance growing cannabis can still end up in jail.

However modest, marijuana legalization would be a symbolic milestone for Mexico, a country immersed in an unforgiving drug war.

According to a 2016 study by the Mexican Senate, Mexican cartels made up to $2 trillion from cannabis sales in the U.S. — between 15% and 26% of their total income. However, as more U.S. states make cannabis legal — most recently, New York, the drug’s importance to the cartels has drastically decreased.

Yet the criminalization of cannabis keeps Mexico’s penitentiary system bloated. In 2018, 37,701 adults and 3,072 teenagers were accused of “narcomenudeo” — low-level drug dealing. Of those indicted on that charge, 60% of adults and 94% of teenagers were arrested with between 5 and 100 grams of cannabis — not caught in the act of selling.

Even under current Mexican law, these people should not have been detained unless they had committed other crimes or behaved violently.

The legalization bill should finally end that type of arrest. But it contains several provisions that undermine its intended effect of protecting vulnerable consumers and small-scale growers, as congresswomen Laura Rojas and Lucía Riojas explained when citing the new bill.

For example, it authorizes individuals to grow cannabis for their own consumption — up to six plants per adult, or eight per household. However, growers must obtain a permit from the National Council on Addictions.

Riojas, who made headlines in 2019 when she offered a rolled joint to Mexico’s new interior minister, said that rule perpetuates the social stigma on consumers.

The bill also grants officials authority, without a warrant, to enter the residence of a cannabis grower to verify compliance with the law. That may lead some people who currently grow cannabis illegally at home to avoid registering, preferring their clandestine tranquility over invasive home inspections.

An underground marijuana greenhouse in Mexico City in 2015. Yuri Cortez/AFP via Getty Images

Such provisions have tempered the celebrations of the activists and academics who have for years intensely lobbied legislators to end Mexico’s cannabis ban for human rights reasons.

In 2013, four board members of the drug policy nonprofit Mexico United Against Crime challenged the prohibition of cannabis before the Mexican Supreme Court. The plaintiffs claimed that Mexico’s cannabis ban violated their constitutionally guaranteed rights, including the right to make decisions about their personal health.

Filing what’s known as an “amparo” — a Mexican legal mechanism that allows citizens to defend their own constitutional rights – they argued in court that adults should be able to grow marijuana at home, and use it appropriately.

In 2015, the Supreme Court agreed, ruling that Mexico’s total cannabis ban was unconstitutional. Justice Arturo Zaldívar Lelo de Larrea noted in this landmark decision that the Mexican Constitution “does not impose an ideal of human excellence” but “allows each individual to choose their own life plan … as long as it does not affect others.”

Because the outcome of an amparo trial applies only to the petitioner, nobody beyond the handful of SMART members could grow marijuana or possess over 5 grams of weed at home. But the decision led to a groundswell of similar amparo cases, and the courts repeatedly ruled in the petitioners’ favor.

Finally, in 2018, the Supreme Court mandated Congress to end the “unconstitutional” prohibition of cannabis.

Given the complexity of this matter and the COVID-19 pandemic, the Supreme Court has granted Congress several extensions to comply with this mandate, but the court’s final deadline expires on April 30. That means Mexico’s cannabis ban will be annulled on that date, even if the new regulation law has not taken effect.

But López Obrador’s views on cannabis have been ambiguous and erratic. Over his long political career, he has frequently voiced his willingness to “debate” legalization but never explicitly committed to do it.

López Obrador ran for president in 2018 as a progressive who would “transform” and “pacify” Mexico, including by rethinking its drug policies. But as recently as February 2020, he declared he would support only medical cannabis, not recreational.

López Obrador has also largely continued the drug war of his predecessors. In 2006, former Mexican president Felipe Calderón deployed the military to quell the drug trade. Unbridled violence followed as soldiers battled the cartels and, increasingly, any citizen perceived as a threat — including people who use drugs.

López Obrador recently extended the armed forces’ deployment as law enforcement until 2024. Over the past 15 years, drug cartels and organized crime in Mexico have killed an estimated 150,000 people, representing about half of all Mexico’s homicides during that period. Another 73,000 people have disappeared.

Ultimately, this bloody history gave rise to cannabis legalization in Mexico — a small yet meaningful step toward de-escalating its war on drugs.

This article is originally published on The Conversation by Luis Gómez Romero. Read the original article here.

More like this
Ancestral healing could be key to decolonizing therapy
By Melissa Pandika
What are postbiotics and parabiotics and should I be taking them?
By Tracey Anne Duncan
How to go green without trying too hard
By Alex Williamson
Stay up to date