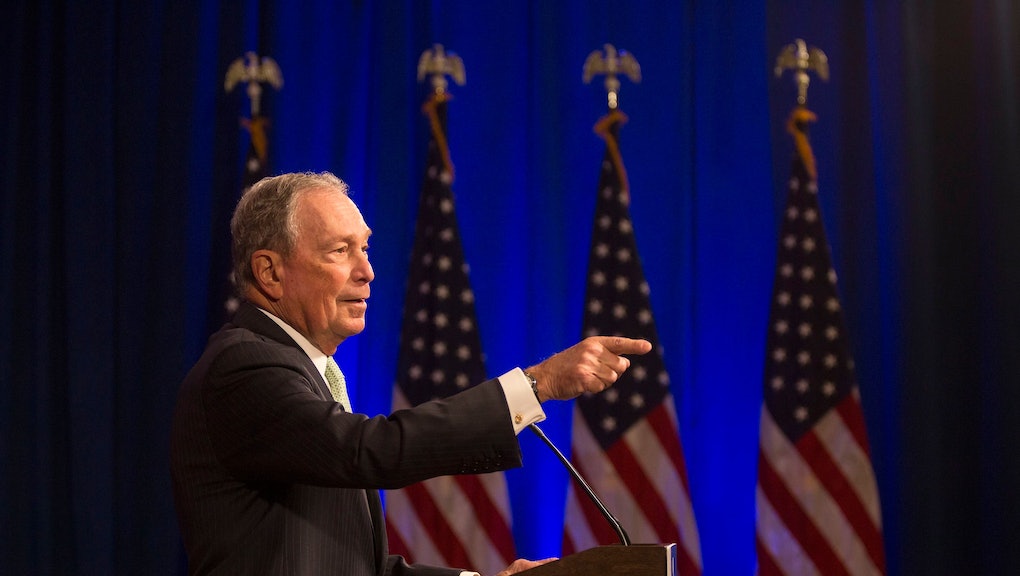 How Michael Bloomberg and Tom Steyer could actually help Democrats

This weekend, Michael Bloomberg, the 14th richest man in the world, announced his candidacy for president. Anyone who’s worried that he’s planning on spending his vast fortune to buy the election can rest easy — buying the election is only going to cost a fraction of his fortune! “Mike Bloomberg spending [$34 million] of his own money on politics is like the median American family spending $39 on a movie night,” wrote CBS anchor Tony Dokoupil on Twitter.

Bloomberg’s entry into the race makes him the second billionaire spending his riches on the primary, following the California mogul Tom Steyer. The two of them will swamp airwaves around the country with ads for their campaigns, even though neither has a particularly strong chance of winning — they aren't polling anywhere near the top of the race, and Bloomberg won’t even be eligible for the ballot in some early voting states. Nor do they offer any unique ideology that can't be found among the other dozen-plus Democratic candidates.

There’s no immediately obvious reason why either Bloomberg or Steyer should be able to construct a winning coalition in the primary. The only real new thing each man brings to the table is a ridiculous amount of money. Ultimately, the hundreds of millions that the two of them will spend on primary campaigns — which, in unflattering light, look an awful lot like vanity ploys — could instead be used in ways that would be far more helpful for Democrats’ chances of taking back the White House. One example: restoring voting rights for ex-felons in Florida.

Since 1996, the general election outcome in Florida has been the outcome nationwide, even as the state flipped from supporting Bill Clinton to George W. Bush to Barack Obama before backing Trump three years ago. And in 2018, the state overwhelmingly voted for a referendum on Amendment 4, which immediately restored the voting rights of all Floridians who’d completed their felony sentences. Previously, voting rights could only be restored if an individual applied to the governor for restoration. Voting rights supporters hailed the measure’s victory, which promised to restore the franchise to an estimated 1.5 million people.

“The messaging was totally organic, totally grassroots,” said Desmond Meade, a convicted felon and voting rights advocate who spearheaded the effort to enact Amendment 4, in an interview with NBC News. Meade earned a law degree after his release from prison. "It wasn’t a black or white thing, a conservative or liberal thing. It was a real people thing, people understood.”

But shortly after the amendment passed, Florida’s Republican legislature — conscious of the fact that Amendment 4 could lead to a surge of registered left-leaning minority voters — began looking for ways to limit its impact. They came up with a devious strategy. This spring, the legislature passed a bill titled Senate Bill 7066, which restricted Amendment 4’s benefits to include only people who had paid off all the court fines associated with their conviction. The state’s newly elected Republican governor, Ron DeSantis, signed the bill into law.

The fines associated with felonies can cost thousands of dollars, and many felons struggle to repay them; a study published this year analyzed the court records of 375,000 people living in 48 Florida counties and determined that only 18% currently owe no fines to the state.

“There is little doubt that [Senate Bill] 7066 will severely limit the ability of eligible Floridians with a past felony conviction to be able to register to vote,” wrote the study’s author, University of Florida political science professor Daniel Smith. The study also found that Black felons were half as likely as white felons to have paid back their fines.

In short, the Florida legislature potentially disenfranchised hundreds of thousands of people, based on their available disposable income. It's a factor known to sort along race lines too. In a state known for razor-thin election margins — DeSantis won his election by only 34,000 votes last fall — this de-enfranchisement could help Trump carry the state in 2020.

SB7066 is currently on hold after a judge blocked its implementation following a series of lawsuits from groups like the ACLU. That decision has been appealed. Considering that Florida’s Supreme Court has a majority of conservative judges, the law may very well survive. If it does, voting rights restoration for Floridian felons could be permanently restricted to those capable of paying back their fines.

Which brings us back to Bloomberg and Steyer. There’s an obvious solution to sidestep the entire legal battle: A benevolent billionaire could simply pay off fees for all felons in Florida. In July, Meade’s advocacy group, the Florida Rights Restoration Coalition, created a fundraising campaign to help felons in Florida pay off outstanding fines. So far, they’ve raised only $250,000 out of the $3 million they asked for. There’s no immediately available estimate of how much paying off all the fines would cost, and the number is likely higher than the campaign’s current goal. But it’s certainly a number that would be a mere drop in the bucket for someone like Bloomberg, whose net worth tops $50 billion.

In one fell swoop, he could vastly improve chances for Democrats in Florida. It might even get his name on television.