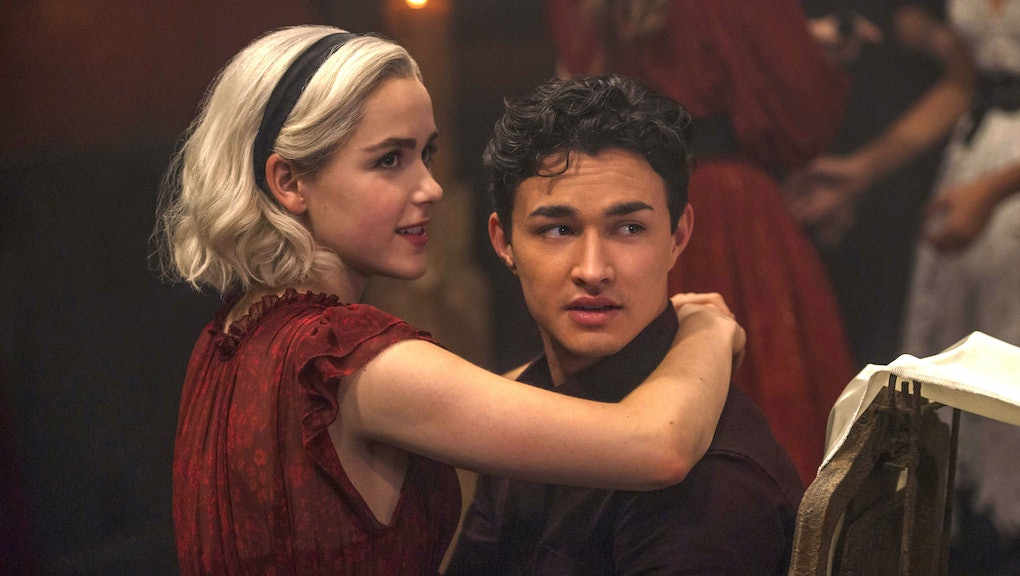 There's celebrity witchery from the likes of Lana del Rey and Ariana Grande. There's the increasingly popular world of DIY tarot and astrology. There are video games like the first-person horror game Blair Witch, witchy memoirs like Pam Grossman's Waking the Witch, and a great deal more witching going on in modern culture. The delirious assortment of pagans, witches, and other occult folks in media, cinema and television is thrilling and even a bit overwhelming.

Naturally, most of these portrayals focus on female witches, following centuries of historical and folkloric emphasis on the female witch, who runs the gamut from sexy to sinister. This leads a person to wonder what the implications are for the presence of men in the womanly milieu of witchery.

There's Roman Castevet, the dotty octogenarian in Rosemary's Baby (1968) who’s the leader of a Satanic cult of baby-stealing witches. Dean Stockwell played a charming yet weird Lovecraftian occultist in the 1970 film The Dunwich Horror. The UK series Hex starred Michael Fassbender as a (rather sexy) demonic sorcerer taking over an art school in the English countryside. There's Lafayette's gorgeous witch/bruja boyfriend Jesús (Kevin Alejandro) in True Blood. There's the delightfully-snarky, impeccably-costumed warlocks (including Billy Porter and B. D. Wong) in American Horror Story: Apocalypse. The UK series A Discovery of Witches has some malevolent men in its midst. And most recently, the timely expression of misogyny and patriarchy in Chilling Adventures of Sabrina, where 16-year-old Sabrina (Kiernan Shipka) takes on the Church of Night's sexist leader Faustus Blackwood (the fabulous Richard Coyle) single-handedly.

During the European witchcraft craze in the 15th century, male witches were present but in the minority. That's possibly a result of those famous misogynist witch hunters Kramer and Sprenger, who penned the go-to witch hunter’s guide of the time, the Malleus Maleficarum (or The Hammer of Witches) which starts with this: “All witchcraft stems from carnal desire, which is in women insatiable.”

By the time of the Salem Witch Trials, in 1692, the idea of witches exclusively being women had taken hold. Throughout the early part of the 20th century, witches were almost exclusively gendered as women. There's the 1922 film Haxan, Disney’s original Snow White and the Seven Dwarfs from 1937, the Wicked Witch of the West in the 1939 film, The Wizard of Oz, 1954’s Bell, Book and Candle, and Samantha’s 1960s suburban sorceress in the television series Bewitched, which also included some “warlocks” and popularized this term for a male witch.

Perhaps the first appearance of an “evil” warlock figure (as opposed to the comic relief gents on Bewitched) was on the horror soap opera Dark Shadows. Shimmer (aka Stephen), a witch and author who lives in Boston, was impressed by Nicholas Blair, a warlock character played by stage actor Humbert Allen Astredo, who first appeared on the show in the summer of 1968. “I thought he was extremely cool, and he was featured in one of the teen mags under the exciting headline, Get hip to the Warlock," Shimmer tells me. "Nicholas was powerful, elegant, and ruthless, with a sharp sense of wit — still perhaps my favorite TV warlock of all time.”

With the spread of modern witchcraft in the United States during the 1960s, later referred to as “neo-paganism” in the 1970s, we start to see covens of both female and male witches, and even all male or all female covens — which became known as “Dianic” covens, named for Diana, the Roman goddess of the hunt and the moon.

“As a research psychologist, I study sexism. I have seen many men benefit from witchcraft by challenging cultural assumptions about gender and power.”

Interestingly, most of the earliest popular books about witchcraft in America were written by men, like Leo Louis Martello, an outspoken gay rights activist and witch who lived in New York City, whose books, Weird Ways of Witchcraft (1969) and Witchcraft: The Old Religion (1973) were as full of juicy gossip as they were instructional.

Rosemary’s Baby, based on a novel by Ira Levin, published in 1966 on the cusp of the occult revival, had a galvanizing effect upon its release in 1968. The film eventually ushered in the era of the Satanic Panic, with its suggestion that a dark cabal of witches were lurking in sophisticated apartment buildings in Manhattan and beyond.

The murder of director Roman Polanski’s wife Sharon Tate, in 1969, by followers of Charles Manson did not help matters. In the wake of the tragedy, the confluence of “occult” and “cult” was irrevocably sealed, associating the elderly Satanic cult members of Rosemary’s Baby with the youthful hippie cult of the Manson Family. The trope of the Satanic cult persists and is often muddled with witchcraft to this day.

We certainly saw this with American Horror Story: Coven and with the more recent season, Apocalypse, which features a showdown with witches, warlocks and a handsome young man named Michael Langdon who seems to be the devil incarnate, played by Cody Fern. Matthew Paolucci, a professor of psychology and practicing witch who lives in California, finds the show to be an interesting examination of gender roles.

“It explores some very compelling themes of male and female power," Paolucci tells Mic. "And I especially liked that the women remained supreme in the end. It gave a big ‘eff you’ to the patriarchy we see now.”

Regarding the current witchcraft revival and its implications, he says: “As a research psychologist, I study sexism. I have seen many men benefit from witchcraft by challenging cultural assumptions about gender and power.”

Despite the rich history of witchcraft in non-western cultures, mainstream portrayals have largely been white. We’re beginning to see attempts at addressing racial diversity in reboots of Charmed and, soon, The Craft, which will also include a non-binary witch as part of the coven of four. It remains to be seen whether any forthcoming portrayals of male witches will continue to challenge stereotypes or expand the pop culture world of witchcraft as we know it.

“As a queer male Witch, I think a lot about the intersection between older occult traditions and modern forms of magical expression that are finding voice," Shimmer says. "Particularly so as outworn gender norms are set aside for new concepts, such as genderqueer, gender fluid, and non-binary identities. Witchcraft is growing and changing in new ways that are fascinating to see.”