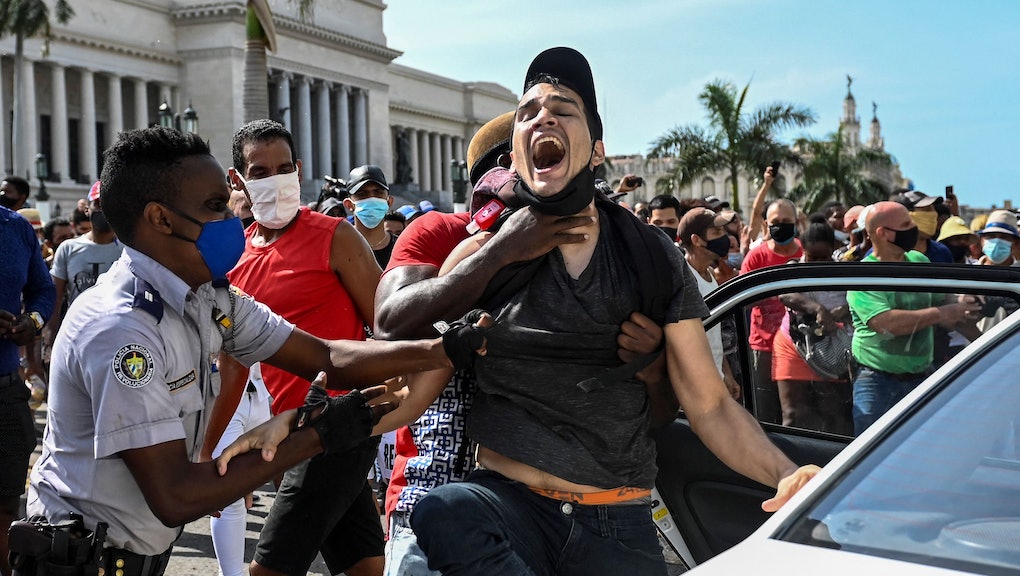 A man is arrested during a demonstration in Havana on July 11, 2021 (YAMIL LAGE/AFP/Getty Images)

It's difficult to fully grasp the dire living conditions in Cuba right now. People line up and wait all day for basic groceries like chicken and oil, only to go home empty-handed, because the store shelves are bare. Lengthy blackouts are frequent, which means residents of the Caribbean nation can't use air conditioners or even fans at the sweltering height of summer. Hospitals and pharmacies don't have basics like antibiotics and aspirin. Plus, the island is experiencing a record spike in COVID-19 cases and deaths. Cubans haven't faced hardships like this since the collapse of the Soviet Union devastated their economy in the early 1990s.

Hungry and desperate, thousands of fed-up citizens have poured into the streets all over the island in collective fury. It was Cuba's largest protest movement in decades, and the people's demands went beyond basics like food, energy, and medicine. In chants, song, and on social media, Cubans rebuffed the restrictive rule of their government and called for freedom. Marchers were heard chanting "patria y vida," meaning "homeland and life," which is a twist on the Communist slogan "patria o muerte" — homeland or death. It comes from a viral hip-hop song pointedly accusing the government of destroying the quality of life in Cuba.

"Patria y Vida" is a collaboration between Miami-based reggaeton and hip-hop stars, like Yotuel Romero and Alexander Delgado, along with Cuban rappers Maykel Osorbo and El Funky. NPR reported the track became a phenomenon when it dropped this February; the music video has been viewed over 6 million times on YouTube. Romero told Billboard he was motivated by studying Cuban history: "Before the revolution, we had a beautiful Havana; now we have ruins," he reasoned. "From that point on, I said, 'I'm not going to be quiet anymore.'"

The song calls on people to hit the streets shouting "patria y vida" and take back their country. It also declares, "It's over now! And we're not afraid." However, after "Patria y Vida" was released, Osorbo was arrested in Cuba. His fans have petitioned the United Nations to intervene, saying he's being persecuted for expressing political views in his art.

Meanwhile, authorities have reportedly responded just as brutally towards protesters, making mass arrests and firing tear gas into crowds. Internet access has been restricted, which made it hard to verify reports of kidnappings and beatings that crept onto social media.

Experts don't think the protests will lead to a watershed event like the fall of the Berlin Wall. Cuba's government retains too much control. However, it is a warning sign to the Communist Party that when people are denied basic human rights, their unquestioning nationalism quickly crumbles — and it was at least partly thanks to a brilliant song.

More like this
Dua Lipa has officially distanced herself from DaBaby
By Kara Weisenstein
Britney Spears is one step closer to escaping her father's control
By Kara Weisenstein
DaBaby is following hip-hop’s homophobic playbook to become its latest villain
By Keith Nelson Jr.
Stay up to date