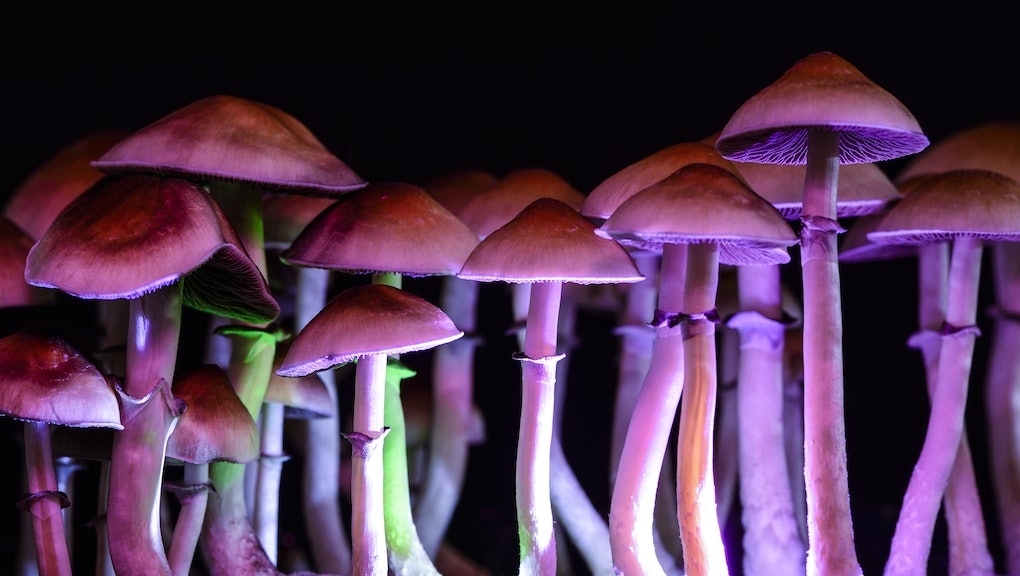 The days when psychedelics were the subject of D.A.R.E class warnings are officially ancient history. In 2019, we understand that hallucinogenic drugs are complex, nuanced, and under the right circumstances, can even treat depression, anxiety, and other mental and physical health issues. While most psychedelic drugs lie in a legal gray area, doctors and researchers across the country are beginning to offer them therapeutically. Academia and medicine alike are taking studies about their efficacy seriously, with Johns Hopkins opening a center just for psychedelic research in September.

The main psychedelics currently being examined for specific therapeutic purposes are psilocybin or magic mushrooms, LSD, MDMA, and ketamine. Some early studies indicate that these substances could have a powerful capacity to treat mental health issues that have resisted more traditional drugs, but there’s also a lot we still don’t know, and they don’t come without potential negative effects.

Since psychedelics will undoubtedly continue to fill headlines over the next few years, here’s everything you might be wondering about when it comes to their therapeutic uses, benefits, and risks.

How are psychedelics being used as therapy?

Studies have shown promise for psychedelics as treatments for a wide range of issues including depression, anxiety, OCD, PTSD, and addiction, says Caroline Dorsen, assistant professor at NYU’s Rory Meyers College of Nursing, who studies how psychedelics are used therapeutically.

While various substances are being tested for multiple uses, they each have their main areas of focus. Ketamine, a dissociative drug traditionally used an anesthetic, has been used to treat depression, with research finding a 60-70 percent success rate for treatment-resistant and severe depression. It’s also been used for pain relief: A study in Pain Medicine found that 76% of chronic pain patients experienced complete pain relief after receiving IV ketamine infusions. Ketamine is the only psychedelic with FDA-approved clinical indications, says Lipi Roy, director of addiction medicine and community engagement at the addiction treatment center Urban Recovery.

Experiments on psilocybin, the hallucinogenic substance in magic mushrooms, have generally focused on anxiety and depression. A small but important 2016 study in the Journal of Psychopharmacology found that psilocybin-assisted therapy sessions improved mood and reduced anxiety in 80 percent of people with advanced-stage cancer six months after the treatment. LSD, another hallucinogen, has also been tested in individuals with life-threatening illnesses and found to reduce anxiety when used as an aid during psychotherapy.

Psychedelics may help by “rebooting” the brain.

Clinical trials have also employed MDMA — the main ingredient in ecstasy and molly that’s responsible for feelings of euphoria and excitation — as an addition to therapy sessions. A study in The Lancet found that veterans and first responders with severe PTSD (87.1 on average on the Clinician Administered PTSD Scale, where above 80 is considered extremely severe) experienced significant reduction of symptoms, scoring a 38.8 on the same scale after treatment.

How do psychedelics treat mental illness?

Mental health issues like depression, anxiety, and PTSD can sometimes be very resistant to conventional treatments because they vary based on individuals’ brain chemistry, personality, and life experience, Roy says. In these cases, psychedelics may help by “rebooting” the brain.

“The best way to describe it is like restarting your computer — everything gets reset and starts interacting all over again, and that can eliminate software problems,” says Roy, expressing the vast complexity of the human brain. “Brain chemistry can determine whether someone is ‘healthy’ or not. Each of these drugs has a psychoactive component that tips a chemical balance to a more therapeutic setting.”

However, that doesn’t mean they’re all going to work for everyone. “It’s not one size fits all,” says Roy. “Much more research is needed, and the potential for misuse and diversion is high. No amount of hope should replace caution.”

What are the risks of using psychedelics therapeutically?

Using psychedelics under a doctor’s supervision is significantly safer than using them to self-treat, but it is not risk-free. Ketamine can cause feelings of dissociation (feeling detached from reality) and depersonalization (feeling like you’re outside your body, looking in), says Meghan Marcum, chief clinical officer at the addiction treatment center A Better Life Recovery. It can also lead to a rapid heartbeat, high blood pressure, and confusion. Negative side effects of MDMA can include jaw tension, dehydration, overheating, and loss of appetite, and LSD and psilocybin can lead to anxiety, paranoia, and nausea.

Each of these drugs has a psychoactive component that tips a chemical balance to a more therapeutic setting.

In addition, on any substance, you run the risk of having a scary or unpleasant trip, as well as experiencing impaired judgment that could lead to dangerous decisions, Marcum says. For all these reasons, it’s important to be closely monitored when you’re using psychedelics.

You should also make sure to tell any potential psychedelic therapy provider about any health conditions you have or medications you’re on because they could increase certain risks, says Dorsen. For example, being on SSRIs (a class of antidepressants) can be very problematic for certain psychedelics, since the combination can lead to an excess of the neurotransmitter serotonin (which is generally associated with feelings of happiness) in your brain. That might sound like a good thing, but it’s not. Psychedelics can also exacerbate mental health issues like psychosis and bipolar disorder, so definitely bring this up with your physician if you have a history of any of these conditions.

“Lastly, it may not be safe to take these drugs with some physical issues, including unstable cardiac disease, certain cancers, or severe kidney or liver problems,” Dorsen says.

Research on MDMA, psilocybin, and LSD is all still developing for many reasons. “Current drug laws have prohibited many scientific studies on psychedelic and psychoactive drugs, and thus we have many more questions than we have answers about the potential risks and benefits of these substances,” says Dorsen. However, what research does show is that the setting you take these substances in matters, so make sure you are in a physically and emotionally safe environment with a trained guide, she says.

Most psychedelic treatments are still in the clinical trial stage, so you’d need to sign up for a study in order to access them legally, says Dorsen. To do that, you can go to the MAPS website or ClinicalTrials.gov to find out which trials are currently recruiting, or read about more psychedelic therapy studies on Psychedelic Support.

The only psychedelic that’s legally available in the U.S. and not considered a Schedule I drug is ketamine. Many major cities have clinics where doctors or psychiatrists provide ketamine via IV as a treatment for depression and other mental illnesses, and psychiatrists can now prescribe a ketamine-based nasal spray called Sprovata for patients to use at home. The nasal spray is FDA-approved, while the IV treatments are considered off-label but still legal.

It’s possible that psilocybin may become more widely available soon, with the FDA recently fast-tracking research on a psilocybin analog for depression and Oakland, California, and Denver, Colorado, voting to decriminalize the substance this year, says Roy. “Psilocybin may follow the same course as cannabis did 20 years ago,” she explains — but for now, it’s not available outside clinical studies.

If you’re not able to gain access to formal psychedelic therapy, Marcum cautions against self-medicating with psychedelics. “When used outside of a professional setting, the dangers of adverse side effects increase exponentially,” she says. “If anyone is seriously considering the medical value of one of these drugs, I would recommend talking to a psychiatrist and considering first-line options if you haven't yet done so.”

More like this
Scientists can now diagnose depression with a blood test
By Tracey Anne Duncan
“Panny,” “panettone,” “panini”: Why silly pandemic nicknames are getting us through it
By Melissa Pandika
Washing dishes is my meditation
By Alexander Hardy
Stay up to date