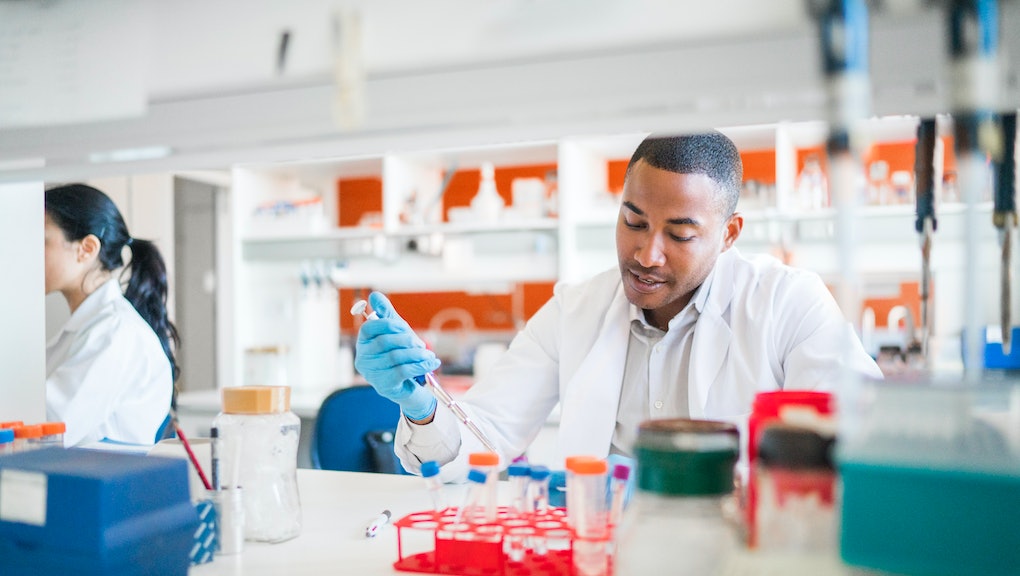 Dominique, a Black electrical engineering doctoral student, found herself in an awkward situation in the lounge of a hotel where she had been attending a conference on science.

A white man at her table assumed a nearby Black woman was on the hotel cleaning staff, so he asked her to clean their table. The woman did as she was asked, but in the process she informed him that not only was she a scientist attending the same conference as he, but she was also the keynote speaker. Rather than apologize for his erroneous assumption, the man cracked a joke.

“But she cleans so good,” the man told everyone at the table. “Can we say: ‘Dual career opportunity?’” — as if an accomplished scientist would need an “opportunity” to clean tables.

All of the white folks at the table stared at Dominique (not her real name), seemingly waiting on her approval of the wisecrack. Caught off guard, Dominique faked a laugh. Her white table mates broke out in laughter, too, but it didn’t seem fake – it sounded hearty and real.

This incident is by no means unique. It represents just one of about 300 such stories that I’ve collected over the past decade or so as a researcher of structural racism in STEM fields: science, technology, engineering and math.

Through my research, I’ve come to see that — for Black and Latinx STEM students — these instances of being stereotyped are quite common. Consequently, these students experience a sort of racial fatigue. No matter what they do, they cannot shake the perception among certain white colleagues and collaborators that they don’t belong.

There’s no shortage of research that looks at the reasons so many students of color leave the fields of STEM. I think that research is worthwhile. But I also believe it’s just as important — if not more so — to examine why and how students of color persist in STEM fields despite all the stereotypes and other obstacles they face. But first, let’s take a closer look at how some of these stereotypes play out.

Suspect from the start

Consider, for instance, what happened when “Leon,” a Black doctoral computer science student, had to pick up a visiting professor from the airport. He had spoken to the scholar over the phone on several occasions. The conversations were pleasant and normal.

Despite having sent a picture of his distinctive-looking SUV, the professor looked around Leon and almost through him at the airport’s pickup area. When Leon approached, she flinched. Leon spoke, so she could hear that he was the person she had become familiar with over the phone. Still, the professor insisted that Leon call his doctoral adviser to verify that he was indeed who he said he was.

Leon eventually gave her a ride. And although he and the professor were scheduled to perform laboratory research together, she abruptly and unapologetically changed her research goals, which allowed her to work only with white and Asian postdoctoral researchers.

The kind of stereotyping that confronts Leon and Dominique leads many Black and Hispanic students to resort to what I call stereotype management — which involves taking specific actions to deal with the prejudices and preconceptions they face as a result of their identity.

But there’s another aspect to the stereotypes. I have also found that the stereotypes often serve as an incentive — one I also believe is unhealthy — for Black and Hispanic students to succeed and, occasionally, to become the best at what they do. They want to disprove the notion that they are not worthy of being in STEM fields. I believe this saps tremendous energy and resources that could be used to inspire innovation and creativity and tap into their brilliance.

Stereotype management is partly performative. It involves such actions as deliberately leaving a high test score on a STEM test on your desk for peers to see.

While sometimes stereotype management involves putting certain things on display, it can also involve keeping certain things concealed. Students have told me that they have kept hidden their meager upbringings and complicated family dynamics to avoid being stereotyped.

Some Black students have told me that they kept their own children hidden to avoid playing into stereotypes about single Black moms. From what I have observed, often when STEM professors find out that a student has children, they don’t want to work with that student because they believe the student will have less time to devote to the lab than students who are not parents.

Also, just as some Black and Hispanic students hide certain aspects of their lives, I have also found — through prior research — that they also take steps to play down their own cultural identities.

A psychological and physical toll

All this contortion leads to inner turmoil and even physical sickness. I know of STEM students of color who have been hospitalized for such conditions as exhaustion. You might wonder if those ailments are merely the result of the demanding nature of the college experience itself. Even if it is, for these students, the college experience is even more demanding because — as my research has shown — it involves being stereotyped as if they don’t belong.

I believe that to help students of color flourish the way they ought to in STEM, college and university leaders must do more than just make cosmetic changes to their public facing or just pay lip service to diversity and inclusion.

It’s not enough to have more students of color featured on university websites, magazines, brochures or other recruiting materials. I believe that higher education must pay more attention to how these students actually experience college, their overall well-being, and how their professors and peers view and treat them.

I also believe more attention should be paid to the reasons that STEM students of color stick with their academic pursuits, rather than looking only at the reasons so many leave.

Finally, if stereotypes and experiences that make students of color feel they don’t belong are a big part of what’s driving so many away from STEM, that’s a clear indication that STEM culture needs to be made anew.

Perhaps the white man who unwittingly summoned a scientist and STEM conference keynote speaker to clean his table was correct. Maybe there really are some “dual career opportunities” in STEM to do science and cleaning — cleaning up STEM of the cultural debris that makes students of color feel they don’t belong.

This article is originally published on The Conversation by Ebony O. McGee. Read the original article here.

More like this
Too much sitting will wreck your life — but some types are better than others
By Wuyou Sui and Harry Prapavessis
At what age are people happiest?
By Clare Mehta
Queer in the country: How rural life is helping some LGBTQ Americans thrive
By Christopher T. Conner
Stay up to date