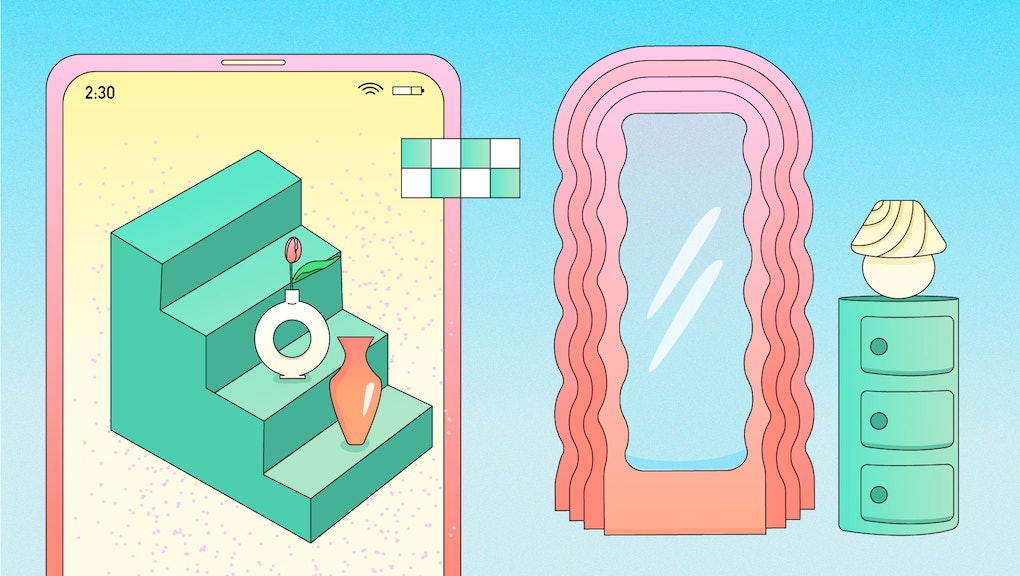 Illustration by Lorenza Centi for Mic

Shelby Veazey confidently maneuvers her Ford Transit LXT onto a narrow side street in Greenpoint. “Oh, there’s something!” she says, gesturing toward where a wooden mid-century sideboard sat on the sidewalk. She jumps out to inspect the drawers and surfaces, snaps a few photos, and loads it sideways onto a dolly, bringing it to a teetering 7 feet tall. With some effort and rearranging, Veazey tucks it into the back of the van with several other found pieces.

The 30-year-old has an eye for street finds. As the founder of Stoober, a delivery service for used furniture, Veazey spends her workdays collecting, driving, and delivering pieces around the city in her van. “This is where I picked up Eileen Guggenheim’s desk,” she mentions as we roll down Manhattan Avenue.

Navigating Williamsburg, a notorious hotspot for trash, Veazey explains that she founded Stoober — short for “stoop-to-stoop Uber” — in September 2020 in response to the sheer amount of excess furniture on the side of the road. Her primary goal was to divert furniture from landfills, while also helping New Yorkers furnish their apartments in an affordable and environmentally sustainable manner. “I needed to be more of a doer,” she says, “and this really helps me get out and do.”

She’s not exaggerating. Five days a week, Veazey loads street finds into her van and delivers them to people throughout Queens, Manhattan, and Brooklyn (anywhere within two hours) for a flat-rate of $30 to $40, depending on the item. She meets some customers by happenstance, encountering them at the curb after they rushed to a piece without a transportation plan. Others DM her requests about items they’ve found on their own or through stoop-spotting accounts like Stooping NYC, Stooping in Queens, and Curb Alert NYC. The rest of the time, Veazey hunts down pieces herself, inspects them for damage, posts them on Instagram, and sells them for the cost of delivery. Kitchen islands, mirrors, and dressers fly off the streets. Veazey knows how happy a used piece of furniture can make someone — she furnished her own apartment entirely through stooping, or in Stoober parlance, “stoobing.”

It’s an amazing story people love to share and tell.

For Veazey, an abandoned piece of furniture that she can’t rehome represents yet another item that will end up in a landfill. According to the Environmental Protection Agency (EPA), less than 1% of the 12 million tons of furniture waste produced in 2018 was recycled, while 80% ended up in landfills. Carpets and rugs, meanwhile, accounted for another 2.5 million tons of waste.

But the growing stooping movement could potentially stymie our wasteful tendencies, as Instagram accounts like Stooping NYC and Stooping in Queens alert their massive followings to gems found on the streets. Stooping NYC receives thousands of DMs per day about furniture sightings, which helps the Brooklyn-based couple (who prefers to remain anonymous) behind the account crowdsource more pieces than they can physically get around to posting. Stooping can mean saving a unique piece from destruction — in a single week alone, Stooping NYC posted a life-size Marilyn Monroe statue and a giant stuffed giraffe — or it could mean extending the lifespan of a simple Ikea set. “I think we have removed the stigma of garbage picking,” the couple tells me.

These accounts also raise followers’ awareness about where trash ends up after they’ve dumped it and how to contribute to a more circular economy. Jessica Wolff, the 36-year-old behind Stooping in Queens, uses her platform to post everything from recycling resources to refurbishing services. “People are definitely learning and opening their eyes more into the amount of waste and ways to reduce their own consumption,” she tells me. “If people actually knew how much of their stuff doesn’t get recycled and how much of it is polluting their waterways, maybe they wouldn’t throw as much away.”

But stooping isn’t only about saving the planet. There’s an allure to happenstance and scarcity that Millennials find particularly persuasive. Wolff believes the demand for secondhand items — like the Buy Nothing movement, a neighborhood-based gift economy model started in 2013 — is only growing. Beyond the trendiness of rare, old t-shirts or vintage velvet couches, Wolff believes young people are attracted to the stories old stuff can tell us. The couple behind Stooping NYC agrees. “Where you got it, where it was before, how you made it work in your place, and how you got it for free — it’s an amazing story people love to share and tell,” they tell Mic.

As for Veazey, what started as a project dedicated to recycling furniture soon also became about achieving social equity through access. Thanks to Stoober, pieces that originally cost hundreds or even thousands are now available for less than an Uber to West Elm’s shopfront. “A lot of times I’m finding that I’m getting a bed to a child who needed it for his birthday, or a mother who has not gotten back into the workforce yet,” she says, noting it’s “redistribution of wealth.”

Veazey believes the pandemic only increased the need for her services. “I think COVID led to the exodus of many people and disenfranchised many more people,” she says. “It was merely about connecting the two pieces and realizing that not only is there a huge amount of stuff out there, but there are also a lot of people that are now in need of stuff for cheap [and who are] making their homes more of a home.” In the seven months since launching Stoober, Veazey has garnered more than 11,000 followers, purchased a second van, and hired a social media assistant — and her rapid growth isn’t an anomaly. Both Stooping in Queens and Stooping NYC also reported a significant uptick in dumped furniture — and followers — since March 2020.

Now that Stoober’s following has grown, Veazey doesn’t always curb hunt to source items. Sometimes followers reach out and ask for help getting rid of old stuff directly from their homes, which eliminates the mystery around street finds that may cause concern about hygiene or bugs. “The ideal goal is not to take away from the stooping culture, but to change people’s behavior,” she says. “Getting things on the side of the road is great if you know that somebody’s going to be getting it. However, the best thing is not having the opportunity of getting rain or dog pee on it — to avoid that middle-man of the curb.” Veazey is also working to coordinate pick-ups with building managers so that she can swoop in on bulk disposal days directly.

“If there’s one thing I feel helpless about, that would be my gas usage,” she admits. Her goal is to offset that by scoring enough items to become carbon-negative by the end of the year, although according to her calculations (estimating one pound of furniture equals one pound of carbon), she probably already is.

In the meantime, Veazey can take pride in the feeling of making a difference daily. Before Stoober, Veazey spent four years working in energy and sustainability consulting for small businesses. She lost multiple clients early in the pandemic — but even before then, her clients could rarely afford to prioritize her recommendations. By contrast, the day-in-day-out Stoober routine gives her a more immediately tangible reward. “I really don’t have anything poor to say about this position, because every part of it is so exciting for me,” she says. “You know — a scavenger hunt, driving around the city, meeting people. It’s the in-real-life connections that remind me why I am doing what I’m doing. Sure, I haven’t connected with the 11,000 people that follow me, but I certainly have connected with at least 1,000 of them, and that feels great.”

The Saturday after my ride-along with Veazey, Stooping NYC posted an unusual oval coffee table a few blocks from where I live in Bed-Stuy. Curious who might claim the table, I walked to where it was spotted — but by the time I got there, it was already gone. Refreshing the original post, I saw the telltale comment posted 10 minutes earlier: “Stoobed.”

More like this
Is it possible to make crypto sustainable? A few coins are trying
By AJ Dellinger
Eco-friendly houseplants: Here's how to ensure your indoor plants are good for the planet
By AJ Dellinger
The all-Black Bill Pickett Invitational Rodeo will air on national TV for the first time ever this Juneteenth
By Jewel Wicker
Stay up to date