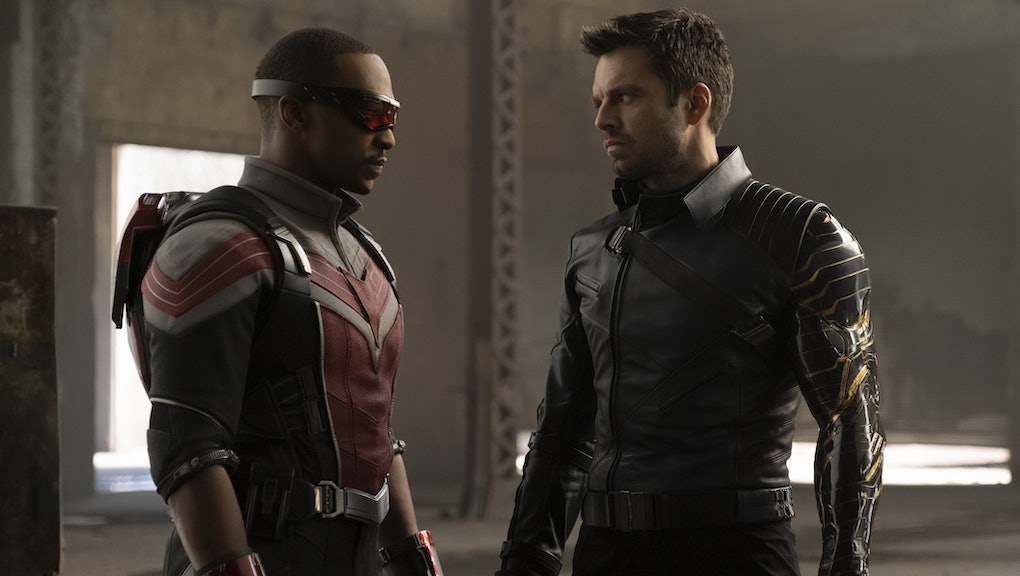 Most fictional stories told about Black people in popular culture are created and funded by people who aren’t African American. If we’re lucky, there are a few Black folk involved at the creative level. Most of the time, though, if we want to tell our stories with any semblance of authenticity we have to go the independent route, or compromise with an entertainment industry in which we are sorely underrepresented.

One of the most reliable stories we tell in current pop culture is the tale of the superhero. And Disney, which has a difficult history telling our stories, is the most prominent with its subsidiary, Marvel Studios. Black Panther, Disney’s first attempt at telling a superhero story with Black people at the forefront, was considered an overwhelming success. But that story was mostly about Africa (and Black Americans’ relationship with it). The Falcon and the Winter Soldier (TFatWS), the studio’s second attempt at a series, is focused directly on the African American experience.

The show has been a source of controversy recently on social media, with many African Americans calling into question its authenticity and Black resonance — which is more than fair, considering how the show dives into race with characters who have rarely referenced it in the previous films. But I think TFatWS, created and written by a black man named Malcolm Spellman, covers a specific aspect of the Black experience in America: code switching. Code switching is the act of a Black person adapting in an environment in which they are a significant minority. When you are Black, there’s a difference between the way you are with your co-workers versus the way you are in the world.

Sam Wilson is no different. Sam works with the Avengers, a group of heroes dedicated to helping and protecting people regardless of race, creed, gender, or sexual orientation. Unlike The Boys, a TV show where the superheroes are corporate and corrupt, the text of the Marvel Cinematic Universe defines their heroes as pure altruists whose personal flaws don’t include racism. It’s a fantasy, I know, but we haven’t seen anything in these projects up to TFatWS that required Sam to call out his co-workers for being racially disrespectful. His Blackness comes in the form of subtle things like recommending Marvin Gaye to Steve Rogers, or calling out Tony Stark for acting suspiciously like law enforcement with a Murk Furman reference.

Now though, as the lead character of his own show, he is reminded, very quickly, that the world isn’t as progressive as his fellow superheroes. The passive code switching he used with the Avengers doesn’t work with people like a local banker or a government that, behind his back, creates a new Captain America even though Steve Rogers himself wanted Sam to assume the name. We hear him at home tell his sister before going to the bank for a loan that “I don’t play around with these white people,” a quote that should be familiar to any Black folk who knows there’s a certain way to “handle” white people in positions of opportunity. It’s not that he becomes a different person than the one we’ve seen in the movies before. He’s merely doing what Black folk have done throughout history: adapt for our survival while keeping our identity in check. But he quickly learns (remembers?) that the bank isn’t the Avengers, because they soundly reject his loan application.

Later in the series, Sam meets Isaiah Bradley, a Black super soldier that America exploited and erased from history. The allusions of Isaiah’s story speak to the whitewashing of Black history and the exploitation of our bodies through situations like The Tuskegee Experiments. Isaiah is a reminder to Sam that serving America as a Black person doesn’t afford us the same instant respect and accolades as our white counterparts. Unlike with the fantastical and altruistic Avengers, no amount of “code switching” will grant people like Sam and Isaiah that instant respect as a fellow human being.

If Isaiah represents Sam’s past, a character named Karli Morgenthau symbolizes Sam’s future. A mixed woman who not only embodies countries outside America, but also the Black Diaspora, violently challenges Sam’s worldview and considers him naïve for holding on to American idealism. Something that he forgot while a part of the Avengers, who represent that moral absolution that America could never live up to. Karli, who has nebulous international origins on the show, can see the hypocrisy clearly in a way remarkably similar to Isaiah’s. But instead of accepting erasure in defeat like Isaiah, she chooses radicalism and militant ideology. As far as she is concerned, a person can’t reason or “code switch” their way to equality; they must violently confront their oppressor. Sam, as a Black man, is incredibly sympathetic to her cause of “One World, One People.” He has no desire to be a radical, but he does want to help her achieve her goal — which was to advocate for the people displaced by the reverse of Thanos’ blip that eliminated half of all life. Still, he finally understands that appeasement and congeniality won’t work with the rest of the world like it does with the Avengers, so he must be more confrontational. That understanding leads to Sam’s final speech in the series, in which he confronts the politicians in the show’s Global Repatriation Council about the legitimacy of Karli’s cause, even though he believes her terroristic approach is wrong.

Through his trials in TFatWS, a context that is so far removed from his adventures with the Avengers, Sam cannot afford to be naïve and not address issues of race (and class) in a world that needs his version of Captain America to represent these voices in a way that Steve Rogers couldn’t. If he didn’t, he would be just as irresponsible as the system he’s trying to fight.

More like this
Elon Musk's first foray into comedy was a strange, satirical website called Thud
By Amanda Silberling
Jaden Smith is opening a restaurant that'll serve free food to homeless people
By Kara Weisenstein
Tom Cruise is in a space race with Russia, because nothing surprises us anymore
By Kara Weisenstein
Stay up to date