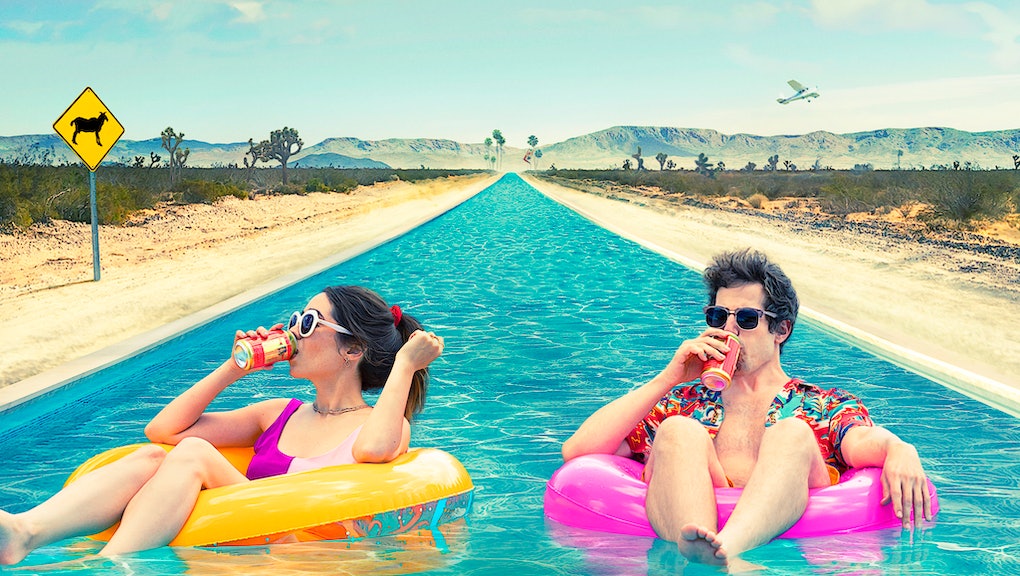 Getting stuck at a destination wedding for eternity would be hell for some people — or millennial kitsch purgatory, at least. The inventive new romantic-comedy Palm Springs drops Nyles (Andy Samberg) into that exact predicament. “It’s one of those infinite time-loop situations you might have heard about,” he quips early-on in the film. We never witness Nyles grapple with his fate. When we meet him, he’s resigned himself to milking as much pleasure out of his mundane existence as humanly possible. That means whiling away his days floating in a pool, drinking Tecate, and eating burritos — and sometimes seducing other guests at the endless wedding-on-repeat he’s doomed to attend.

An encounter with Sarah (Cristin Milioti), the reluctant maid of honor and elder sister of the bride, kicks off the events of Palm Springs. You see, Sarah follows Nyles into a mysterious glowing cave in the desert after their hookup goes somewhat awry, thus getting trapped in the same hellish time-loop, where it’s perpetually November 9, the day of Tala (Camila Mendes) and Abe’s (Tyler Hoechlin) desert wedding. Watching Sarah freak out and Nyles speed-coach her through the well-worn beats of the time-loop genre sets the tone for the rest of the movie.

A lot of the magic of Palm Springs, the charmingly absurd narrative-feature debut from writer Andy Siara and director Max Barbakow, comes from how nimbly it skirts past ideas explored in Groundhog Day, The Edge of Tomorrow, Russian Doll and other pop culture artifacts about getting stuck in a moment you can’t escape. Repeating the wedding till Nyles and Sarah become the best karmic versions of themselves? Not gonna work in this movie — and that’s one of the things that makes it so fun. Faced with an eternity of waking up in the same place with the same person forever and ever, what is there to do but have a blast and inevitably fall in love?

Siara and Barbakow didn’t set out to make a movie about quarantine, though obviously Palm Springs, which is now on Hulu and screening at select drive-ins, hits differently in a pandemic. “I mean, we never could have foreseen that we would have this kind of relevance. Now we’re all living in some version of a time-loop,” Siara told Mic. Five years ago, when he and Barbakow started conceptualizing their film, “it was partially a reflection of our own lives at the time,” Siara said. They were thinking about the malaise that comes with adulthood, specifically in your late 20s and early 30s, when most people start making big life decisions and cementing who and what they want to be in this world.

Siara turned to screenwriting in his late 20s, after quitting the band he started with his brother in high school. The Henry Clay People never “hit it big,” but they were mainstays in Los Angeles and toured extensively till the very end, playing gigs at Coachella, SXSW, and Lollapalooza, to name a few. When the band broke up in 2013, Siara had to figure out what to do with his life. “When the band kind of plateaued and I was 27, that’s when I realized I had avoided answering that question,” he told IndieWire. “There’s nothing else that I could think of doing.” Eventually, he enrolled in film school at AFI, where he met Barbakow.

The idea for Palm Springs was “mostly born out of being in school together in an intensely structured bubble making work in a pretty formulaic way,” Barbakow told Mic. After the duo graduated, they found themselves asking what’s next, wondering if the debt was worth it, wondering if they’d actually be able to make it big in Hollywood. A kernel of a concept emerged on a trip to Palm Springs. “Max and I had a late night drinking Mai Thais and gambling at the casino and asking ourselves what we wanted to do, being totally emotionally honest with each other about our hopes and fears and shames in life,” Siara told me.

The next morning, while nursing his hangover, Siara got a call offering him a dream job, writing for the series Lodge 49. “I remember it so clearly, because I was feeling the hangover blues. And then all of a sudden, I got this job that I'd been waiting for, that I'd been wanting so bad,” he said. The juxtaposition spoke to this weird lack of control we have over our own trajectories. “Simultaneously nothing matters and everything matters” with “things happening at your highs and lows,” Siara mused.

They committed to the time-loop device in late 2016, after Trump was elected and suddenly everyone was glued to the news cycle 24/7, waking up each morning to fresh iterations of the same horror day after day. It’s no accident Palm Springs is set on November 9, the date America learned a celebrity millionaire was its new commander in chief. By this point, Siara and Barbakow had explored the character of Nyles to death. “We decided to treat our movie as a sequel to a movie that doesn’t exist, because there’s a whole other film where we watch Nyles get stuck in time, but some version of that movie has been done by much smarter, more talented people,” Siara explained. “So we freshened it up a bit.”

“That idea of a character trapped in a very confusing world with himself was kind of always at the core,” Barbakow added. “I guess that's what we're all experiencing at this point, and it's all about how you choose to navigate your days and how you choose to reflect. Nyles starts as a character who is very selfish and hedonistic and has kind of given up. He doesn’t put much into his world that’s constructive. And Sarah provokes him to pull his head out of his own ass, in a way.”

Pandemic aside, Palm Springs had a fairy tale trajectory once it was penned. The film’s wacky sensibilities attracted the Lonely Island, cementing Samberg’s involvement, and things quickly snowballed from there. They were able to attract an all-star cast, including J.K. Simmons, who glitters with rage as a third wedding guest who inadvertently gets sucked into the time-loop. There’s also Milioti, whose star-making, absolutely masterful ability to flip between high-energy physical comedy and quiet pathos is arguably the brightest jewel in Palm Springs. Then in January, the film premiered at Sundance and sold to Neon and Hulu for a record-breaking $17,500,000.69, the highest price ever paid for a Sundance pickup, beating 2016’s Birth of a Nation by a very nice 69 cents.

Palm Springs is destined to be the comedy of the summer, both for how relevant it feels and how frankly ingenious it is. But Siara and Barbakow told me they’re taking care to absorb this moment before rushing out to capitalize on their success. “We had no expectations other than wanting to make something that felt very honest and true to ourselves,” Barbakow noted. “We’re just so grateful for how Palm Springs evolved with the Lonely Island and Sundance and everything, so the fact that it’s hitting right now, you know, we couldn’t have planned that. But we’ll take it if it could give somebody a little bit of relief and resonate with their experience.”