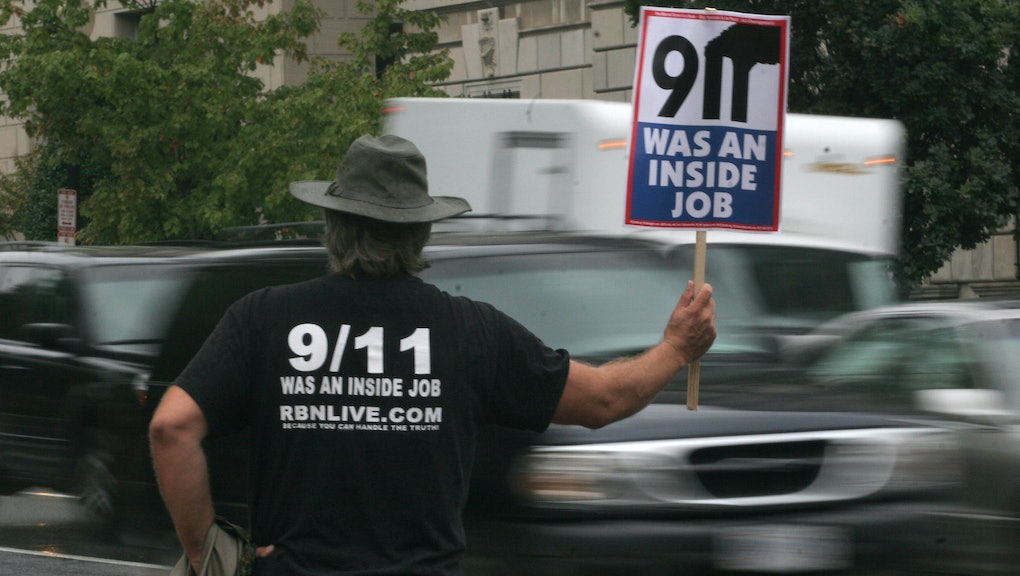 For the last half-decade, it has felt like we've been living in the land of conspiracy, with new rumors and misinformation in need of debunking every day. Reality — or at least an agreed-upon version of it — has never felt easier to detach from, with alternate explanations readily available to sweep people up and send them tumbling down the rabbit hole of conspiratorial thinking. Yet despite how prevalent tinfoil hats seem to be today, widespread belief in bonkers conspiracies is not as new as it may feel. "Conspiracy theorizing is a human issue and appears, as far as I can tell, to be a constant throughout history," Joseph Uscinski, a professor of political science at the University of Miami, tells Mic.

It's certainly been a fixture of American history. It dates all the way back to the country's infancy, when rumors of secret organizations seeking to overthrow the government grew out of lingering fears of religious persecution. Many prominent events in American history have alternative conspiracy-laced explanations: the moon landing, the assassination of President John F. Kennedy, Area 51. "Seemingly all events and circumstances attract conspiracy theories. Events that are more salient will attract more conspiracy theories, largely because more people are paying attention," Uscinski explains. "Conspiracy-minded people concoct conspiracy theories around things that they are paying attention to."

On Sept. 11, 2001, nearly the entire country was paying attention to what was happening in New York City. At 8:46 a.m. local time, an American Airlines plane crashed into the north tower of the World Trade Center. An entire country of people stopped what they were doing and watched the unthinkable unfold. Ask any person who was old enough to remember that day clearly, and there will be a moment in their recounting where they mention the helpless feeling of not knowing what was happening.

"People are looking for answers when they feel worried and uncertain."

It is in those moments — the 18 minutes before the second plane hit, and the weeks of confusion and malaise that followed — that the seeds of conspiracy can be planted. There are a number of conspiracy-driven accounts of what happened on Sept. 11, 2001. Most of them are as well known as the official story, either through collective skepticism or by memeification: that the attacks were an "inside job," that the government played a role in bringing down the towers, that jet fuel can't melt steel beams so therefore some other force destroyed the buildings. They're ideas that are jokes in some circles, but facts in others.

"Conspiracy theories tend to thrive in times of crisis and uncertainty," Karen Douglas, a professor of social psychology at the University of Kent, tells Mic. "People are looking for answers when they feel worried and uncertain." It's not malicious, it not even always an attempt to undermine institutions or sow doubt. It's rather a natural attempt to explain the seemingly unexplainable.

9/11 gave an entire nation an inconceivable tragedy, and then asked them to process it. It was a time when there was a brand new president, after a change of power between parties, and a time when a a relatively new online ecosystem for communication combined with a growing sense of doubt in institutions that once had the public's trust.

By September 2001, more than half of people in the U.S. had access to the internet. It was still in its infancy, with most people connecting via dial-up and the idea of social media being limited to primitive chatrooms and slow-updating forums, but it was more active than ever. According to Pew Research, nearly three times as much conversation took place online than usual in the 48 hours after the crisis, taking place on message boards, through email listservs, and in the comment sections on news sites. It was on these backroads that conspiracy theories could travel — in a scattershot way, but still.

But as the decade continued, information-sharing on the internet got a lot more robust. Less than a decade after the World Trade Center attack, nearly 80% of Americans had internet access, social media in the form of MySpace was growing rapidly, and the internet was moving into its media phase with image-sharing and video-hosting sites going online.

It didn't take long for some lingering conspiratorial thoughts about 9/11 to take hold on these new platforms. A quick snapshot of the moment that Americans were living in during the back half of the 2000s: The public was growing disillusioned with the war in Iraq, the second front in the Bush administration's War on Terror, and starting to question the government's narrative around the reason for the invasion. Despite claims that Iraq had been developing weapons of mass destruction, none were found. A bombshell report from the BBC brought to light the idea that the U.S. was seeking to take control of the country's rich oil fields, and that a plan for an American-backed coup in Iraq had been in place long before the events of 9/11. Oh, and the country was about to plunge into a deep, devastating recession.

Meanwhile, an American filmmaker named Dylan Avery decided to put together a homemade documentary called Loose Change. Using spliced-together news footage, Avery laid out his theory that the events of 9/11 were carried out by the U.S. government, claiming that the planes that crashed into the towers were drones operated by the military. Avery's theories, released in 2005, weren't necessarily novel, as they echoed some of the ideas of the so-called "9/11 truth movement." But the documentary format and the availability of the internet mainstreamed the conspiracy; the film, produced on a laptop, spread like wildfire online. It racked up more than 4 million views in just four months, at a time before YouTube existed. At one point, it was the most-watched video on Google Video, which was at the time one of the largest video-sharing platforms online.

This formula has been followed many times since. It's all over modern video platforms like YouTube and TikTok, where conspiracies persist despite attempts to squash disinformation. Everything from lies about voter fraud in the 2020 presidential election to claims that the coronavirus pandemic was somehow a manufactured crisis end up in a slick documentary format, complete with authoritative-sounding voiceover and a tidily tied narrative that explains everything. These types of videos rack up views, and efforts to stop misinformation fail to catch them in time. "It is easier now than ever before for people to find like-minded others and become even more interested in conspiracy theories," Douglas says. "For people who are already inclined toward conspiracy theories, it is easier now to find them and become embedded in conspiracy communities more quickly."

Back in 2005, as conspiracies about the events of 9/11 were starting to take hold, there were significant efforts to try to squash the rumors, by forces that had historically had the type of authority that could quell public concern. Congress commissioned the 9/11 Commission Report, and an independent group of experts was tasked with providing a thorough accounting of what happened on 9/11 and why. The massive text was made available to the public, both in a paperback book and eventually as a graphic novel. The editorial staff of Popular Mechanics published a book that sought to debunk many of the common myths surrounding the events of the terrorist attack, providing scientific explanations for many of the claims that were being made by conspiracy theorists.

But public trust in these institutions had started to crack. In 2005, a quarter of the general public expressed little to no trust in newspapers and Congress. Just two decades earlier, American people had nearly twice as much confidence in these sources of information. Likewise, the 24/7 news cycle that was born out of coverage of 9/11 had started to wear on people; trust in television news plummeted by nearly 10% over the first five years of the new millennium.

Those fissures have only grown deeper since then — particularly for the media, which is now experiencing the worst levels of public trust on record. (Congress has a long and storied history of being hated and distrusted by the public, so it had a much shorter way to fall.) News sources that once were trusted have been tapped by social media companies to help sniff out misinformation, which has only resulted in some people claiming they are being censored rather than considering the possibility that they are spreading false information. Attempts to debunk bad information now tends to make people believe it more. "This is a hunch, I don't have much evidence to support it, [but] politics is overtaking religion," theorizes Joshua Hart, a professor of psychology at Union College. "Political conspiracy theories and theorists are hijacking some of the discourse, at least among a notable subset of the population."

9/11 and the conspiracies that followed it did not create these conditions, but they did thrive in them and create a formula for spreading doubt and misinformation that we see all over the internet today. Most experts believe that there are not a growing number of people who believe in conspiracy theories, but rather that those who are prone to conspiratorial thinking are have an easier time these days finding one another and sharing their ideas in spaces where their beliefs go unchecked.

In the end, Uscinski notes, conspiracies don't have to spread to be believed. They exist in some people's minds no matter what. It's just that those theories now have more room to breathe since 9/11 truthers wrote the playbook for the online age. "The internet gives a medium to encounter these ideas and like-minded people," Hart explains. Case in point: More people now admit to believing in the conspiracy theories about 9/11 than did in the years following the tragedy.

More like this
There are QAnon NFTs now, because one grift deserves another
By AJ Dellinger
If "Today Is America" then what the hell is tomorrow?
By Rafi Schwartz
Live from New York: Revisiting the totally bonkers era of post-9/11 'SNL'
By Rafi Schwartz
Stay up to date