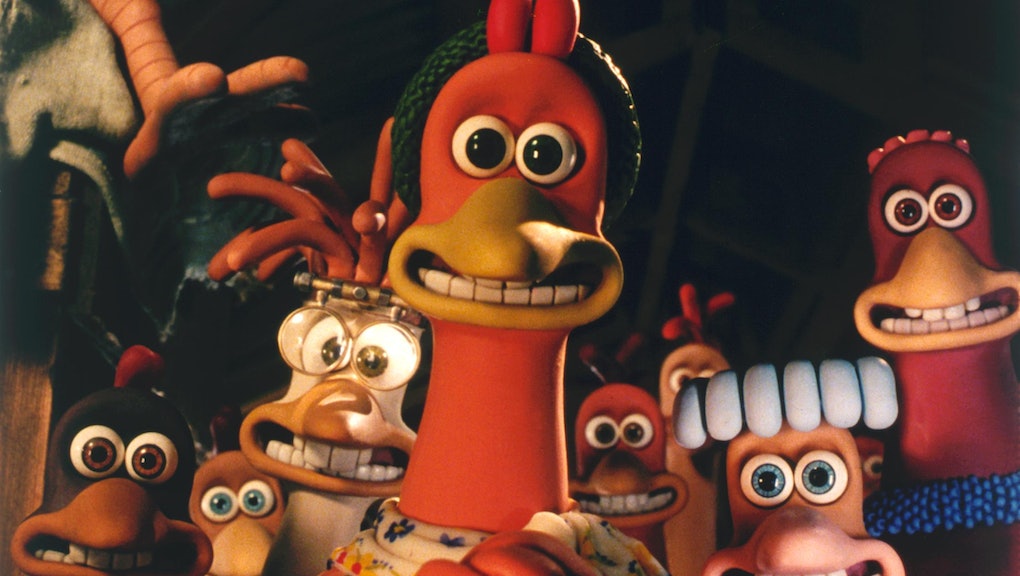 Aardman was responsible for the popular claymation adventures of Wallace and Gromit, a bald man and the super-intelligent beagle he lives with. The company would eventually win an Oscar for their Wallace & Gromit film, The Curse of the Were-Rabbit, and become a world renowned animation studio. But before all of that, Aardman took a leap of faith with the 2000 film Chicken Run, creating what would become the studio's most enduring film. The movie broke box office records for stop-motion animation. It also left a lasting legacy as one of the more original films of its time.

But how exactly did a movie about a group of cunning chickens plotting an escape from their coop become one of the most endearing artifacts of the early 2000s?

The story starts back in 1996, after the release of the 30-minute Wallace and Gromit short A Close Shave. The film's creator Nick Park had an idea. The 61-year-old had grown up with chickens in his garden and had once drawn one digging its way out of its coop with a spoon. “It suddenly struck me how similar chicken coops are to films like The Great Escape,” he says. “That seemed like it had legs, really.” The Great Escape, but with chickens. A beautifully concise premise was born.

While Park and Aardman co-founder Peter Lord were at Sundance for A Close Shave, a new company called Dreamworks sent a private jet to bring them to LA for a dinner meeting. In the air, Park carried the Chicken Run pitch scribbled on the back of an envelope. As if it were fate, Park and Lord sat down with producers Jake Eberts and Michael Rose at a chicken restaurant. Also at the dinner was Steven Spielberg, who co-founded Dreamworks in 1994. Spielberg told Park and Lord that The Great Escape was his favorite film and that he had 300 chickens on his farm. Dreamworks was on board.

Chicken Run tells the story of a group of chickens on a farm owned by Mr. Tweedy and the cruel Mrs. Tweedy, who is plotting to turn them into pies. With a revolutionary fervor, the chickens of Tweedy’s farm hatch an escape plan. At the time, a film like this was a seriously ambitious undertaking. Aardman had never made a film longer than half an hour, and Chicken Run would end up running almost three times that. Dreamworks' resources and patience proved essential. “It was a liberation to have that amount of time and that amount of investment,” says Tristan Oliver, a director of photography on the film. “We were trying to take what had been a sort of aggressively kids-TV medium and turn it into something that was beautiful and cinematic.”

There are a lot of considerations making a feature-length movie using claymation characters. The style is labor-intensive and visually complex. For example, it was non-negotiable that Chicken Run’s characters would boast expressive sets of teeth. “It comes with the territory, really,” Park says. The animators had to decide how each character was going to be built. The chickens themselves, which were about a foot tall, needed to be made principally from silicone because plasticine would be more vulnerable under hot lights and too heavy for their spindly legs. Their most expressive parts — their heads and arms — could be made from plasticine, and an armature department furnished each chicken with a delicate metal skeleton.

The film's human characters, the Tweedys, complicated things. “We started off by building a large-scale farmer but that was impossible to animate because he was about four, five feet tall,” says Dave Alex Riddett, the senior director of photography. In the scenes in which the couple interact with the chickens, tiny chickens were used in wide shots. They tried laser-cutting these smaller chickens, says production designer Jan Sanger, but ultimately had to build them by hand. A whole mini-chicken department was required.

Meanwhile, the script was taking shape. After playwright Jack Rosenthal turned in a first draft that wasn't up to scratch, Karey Kirkpatrick, who wrote James and the Giant Peach, got a call in LA. Aardman wanted to meet him in Bristol. After he arrived, they asked for his thoughts on the script. One of his notes was that Rocky — the flash rooster who is catapulted into Tweedy's Farm and tells the chickens he can teach them how to fly — should be voiced by an American. He had seen how the lack of stars on James and the Giant Peach caused apathy at press junkets. “I realized it was kind of a bold suggestion,” he says, “because the American was coming in, saying, 'Put an American in it.' But it did work with the story.” This was ultimately how Mel Gibson — an Australian with huge box office clout at the time — came on board.

Kirkpatrick came back to the UK and travelled with Park and Lord to Yorkshire, where they were to get a feel for the northern accent. When Park arrived at the Wensleydale cheese creamery, “It was like the Queen was arriving,” says Kirkpatrick. “We left there with tons of cheese.” Apparently Wallace's fondness for Wensleydale in Wallace and Gromit had saved the creamery from bankruptcy.

Aardman's studios used to be a banana warehouse by the Bristol docks. But for Chicken Run, they needed something bigger. “We needed more of a football field, really,” says Park. They found a vast space outside Bristol which Park likens to a giant silver biscuit tin. Inside, the directors would walk between approximately 30 sets, overseeing a crew of around 250 people. “It was incredibly exhausting,” Park says. Every night the footage that the team had captured would be driven to Heathrow — the closest laboratory to Bristol — where the film would be processed overnight and driven back the following morning. There are more than 120,000 frames in the film, and the team filmed roughly 11 seconds per day for 18 months.

The ambition of the project presented a complicated set of challenges. The models, once only seen on small TV screens, needed to look good on giant movie screens. Riddett recalls going to Leicester Square's Empire cinema to see how close-ups of Mrs. Tweedy held up. “It was like looking up at a high-rise building,” he says. Here there was something of a division between those who thought the 'thumby', handmade style was charming, and those who believed Aardman needed to leave it behind. Tristan Oliver's thoughts after seeing the Empire footage were clear: “'Oh my God, we can't possibly leave it that rough because it looked horrendous'.”

Jay Grace, one of the animators on the film, tells me that each animator working on a piece of dialogue was given a dope sheet, on which a line would be broken down phonetically. To save time, multiple mouth shapes were made for each character and could be popped onto the heads as necessary. “I used to love putting the 'oo's on because you get this lovely long kind of trumpet shape with the little doughnut on the end,” he says. There was a bank of assistant animators constantly producing new mouths. “Occasionally you'd have to say to the animator, 'Can I borrow your long 'oo', please? My one's got a little bit mashed up.'” Imelda Staunton, who voiced Bunty the chicken, tells me about the impact the voice recordings had on the process: “You might do something and they'd say, 'We've got to go back now and make another 400 pair of lips so that word can be used.'”

Tristan Oliver describes one sequence in which Ginger is encouraging the chickens to speed up on their building of the plane. The camera pulls back through the inside of the hut as numerous things – hammers, saws, planks of wood – pass through the frame. “The only way we could shoot it was to start with the back wall of the hut as a stand-alone piece and then construct the hut around the camera as the camera pulled back,” Oliver says. But, as the objects were inserted into the foreground, they couldn't suddenly create a shadow. “So we had to fake the walls a much larger scale but further away so that they were doing what they would do if they'd been in the right place.” As they dropped in the set while the camera pulled back, they would slice the cardboard shadow-casting bits of set away with a Stanley knife. The feat is so impossibly sophisticated you would never even guess how it had been achieved. “That took a bloody long time,” he says.

When the film was about 85% done, composers Harry Gregson-Williams and John Powell came on for the score. “It was fascinating walking around their premises: open a cupboard and a bunch of lips falls out,” Gregson-Williams says. It took them a while to escape the Great Escape theme that loomed large over the whole project but eventually, they managed it. They recorded the score in Abbey Road Studio 1, watching footage of the film as an orchestra played. “The spirit that the movie encapsulates was very much evident at Aardman, I thought,” says Gregson-Williams. “They all seemed like a real happy bunch – working away on their rather eccentric beauties.”

In LA, Chicken Run premiered on a Saturday morning, at Universal Studios. Some chickens had been put out in a little pen with some straw. Writer Mark Burton, who wrote additional material for the film, remembers there being a flurry of anxiety because Mel Gibson had got a wet foot after treading in a trough of water meant for the chickens. As if that wasn’t enough, the lights were never completely dimmed in the theatre, and the film was out of focus for 35 minutes. “I've come 8,000 miles and this is possibly the most disappointing day of my life,” recalled Oliver.

But, in London's Leicester Square, things were different. On the morning of the premiere, Oliver and Riddett watched three different prints of the film and chose the best one for that evening. Aardman bought Odeon's entire upper gallery for the crew. As they watched the 120,000 frames play, they were intensely proud of what they had achieved. “There was a great feeling in the auditorium of 'God, this is gorgeous',” says Imelda Staunton. It was the culmination of almost five years' work. “We felt we'd made it,” says Riddett.

Chicken Run remains the most successful stop-frame film of all time. Its closest comparison, The Nightmare Before Christmas, made $88 million compared with Chicken Run's $224 million. “Suddenly Aardman were very important to Dreamworks,” says Burton. The film came at the perfect time for all parties: Aardman was full of young people looking to prove themselves; stop-frame animation was still a novelty for audiences; and Dreamworks was still funding traditional animation. “The movie was born under a lucky star,” says editor Mark Solomon.

To Burton, the film can be read as a sort of metaphor for the rise of Aardman. “This was the moment that felt like it was happening for real,” he says. “Aardman was going to escape and was going to become this big global force in animation.”

Recently, on the film's 20th anniversary, it was announced that Aardman was working with Netflix on a Chicken Run sequel. The announcement prompted a flurry of excited tweets from those who fondly remember the original for its beautifully simple premise. A group of chickens who just want to be free.