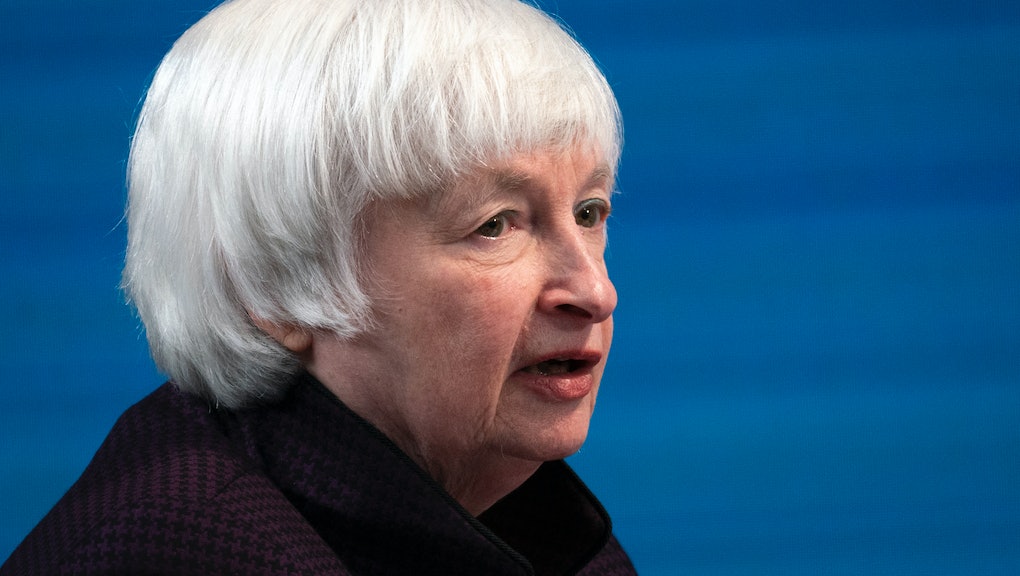 For many, President Biden's political legacy will be defined by how he handles the coronavirus pandemic. Of course, Biden will not address the pandemic alone — he's got a bunch of Cabinet secretaries on hand to assist him. One person that will play a major role in the United States' recovery from the pandemic is the secretary of treasury. And although Janet Yellen recently made headlines as the first woman to be treasury secretary in U.S. history, many people are unclear on what exactly she will be responsible for.

The Cabinet consists of the vice president along with the heads of 15 executive departments and some other positions, like the White House chief of staff. The president is able to dismiss and replace these department heads at any time. That's because their main job is to advise the president, so you don't want to keep a department head around if you know you're not working towards the same goals.

In her new role, Yellen, who previously served as Federal Reserve chair from 2014 to 2018, will lead the Department of the Treasury. Her main job is to advise the president on economic and financial issues. She's also responsible for encouraging sustainable economic growth. As the U.S. struggles to end a pandemic that has financially devastated millions, it's easy to see how Yellen's role as secretary of treasury could be so impactful in the years to come. But let's be real, all that may seem a little vague. So, here's a few examples to show exactly what type of responsibilities the secretary of treasury has.

If you were to ask someone who's in charge of collecting taxes in the U.S., chances are high that they'll say the Internal Revenue Service and leave it at that.

A partial arbiter of the U.S.'s credit rating

That's right, countries have credit ratings, too. Known as sovereign credit ratings, these scores were introduced in the early 1900s and assess the overall creditworthiness of a particular country. As reported by The Balance, these ratings have grown in popularity because countries are increasingly utilizing international bond markets. The three most popular rating agencies are S&P, Moody's, and Fitch.

Now, the Treasury Department is in charge of maintaining the U.S.'s financial infrastructure, and part of that includes managing the country's debt. As head of the department, the treasury secretary takes on those responsibilities, too, including paying interest payments and refinancing debt through bond markets. While sovereign credit ratings take into account the political risk of dealing with a particular country, they're also looking at the economic situation of dealing with that country — just like your own credit rating does about you.

Go ahead and take a look at a dollar bill. On the front right side of the bill, you'll notice a signature (whose, exactly, depends on when the dollar was made). And beneath that, Secretary of Treasury is written in italics.

America's ability to print its own currency means that essentially it can never default on a debt, which keeps the U.S.'s credit rating extremely high. And that high credit rating is why other countries will basically always be willing to invest in or do business with the U.S.

More like this
Guess how much Trump's companies made during his presidency!
By Rafi Schwartz
Wanting to start a family motivated us to pay off $126K in a year
By Marianne Eloise
Should public transit be free?
By Andy Crump
Stay up to date