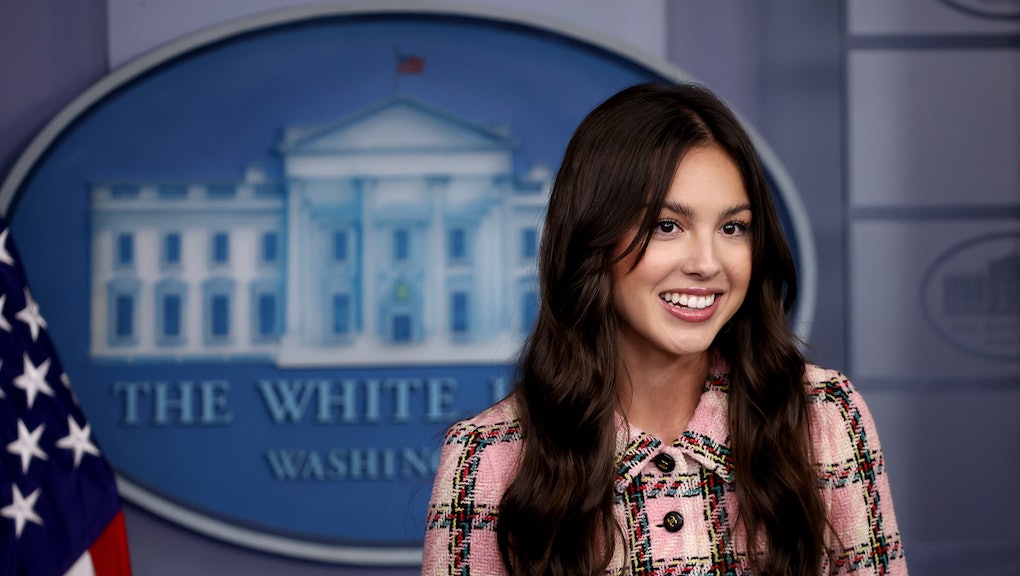 Teenage pop phenomenon Olivia Rodrigo stopped by the White House on Wednesday to meet with a couple of policy wonks more than six decades her senior. President Joe Biden, 78, and Dr. Anthony Fauci, 80, welcomed the "Driver's License" singer, 18, to Washington, D.C., to film a series of public service announcements encouraging young folks to get the COVID-19 vaccine.

The U.S. fell short of Biden's goal to have 70% of the nation partially vaccinated by July 4 — just before the holiday, the C.D.C. reported 67% of the population had received their first shot. A big driver of the sluggish rates is vaccine hesitancy among young people. The White House is hoping Rodrigo and her 28 million social media followers can help change that. The pop star also popped by a briefing with White House press secretary Jen Psaki to share why she felt inspired to help out. "I am in awe of the work President Biden and Dr. Fauci have done and was happy to lend my support to this important initiative," Rodrigo said.

The "Deja Vu" singer noted that it's never been easier to walk into a pharmacy, doctor's office or pop-up vaccination site to get a free shot. "It’s important to have conversations with friends and family members encouraging all communities to get vaccinated and actually get to a vaccination site," she added.

The previous president had a lot of trouble convincing any celebrities to touch his administration with a ten-foot pole. They vetted 274 big names for a planned $300 million ad campaign about the pandemic and couldn't score a single endorsement.

His predecessor Barack Obama, however, had a great relationship with Hollywood. Stars like Daniel Craig, Jon Hamm, Kerry Washington, Dule Hill and Seth Meyers teamed up with the White House to film PSAs about sexual assault.

Using a famous face to push the government's agenda stretches back to anti-drug campaigns funded by the government, starting with Nancy Reagan's "Just Say No" efforts in the 1980s. The 1997 version of the famous "This Is Your Brain on Drugs" commercial starred Rachael Leigh Cook smashing an egg with a frying pan to simulate what happens to your neurons on heroin. The weirdest of the bunch was definitely Paul Reubens in character as Pee-Wee Herman, telling kids that "crack isn't cool."

Anyhow, one drug the government wholeheartedly endorses is a shot that gives you antibodies to protect you from a deadly respiratory virus. It's kind of like becoming a superhero, but your power is breathing in public. While getting the jab should be a no-brainer, millions of folks are still hesitant, however. Which is why Biden went with a tried-and-true tactic: getting somebody young and popular to deliver his important message to the people.

More like this
Why the buzz around Kanye West's new album feels different
By Brandon Yu
Dua Lipa has officially distanced herself from DaBaby
By Kara Weisenstein
The U.S. just sold Wu-Tang Clan’s rarest album after targeting them for years
By Keith Nelson Jr.
Stay up to date