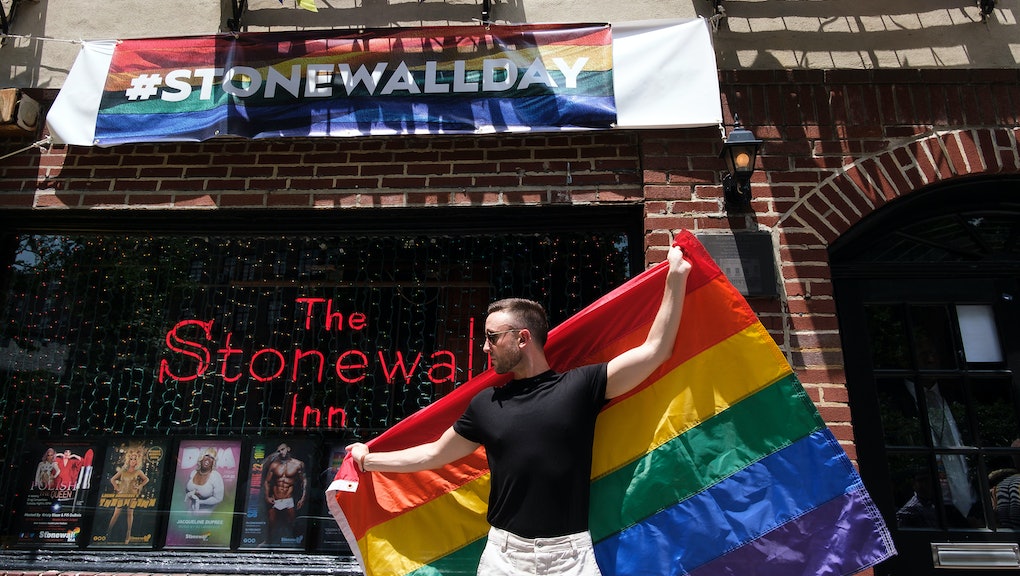 During Pride month, both Taylor Swift and Joe Biden — two straight, cisgender celebrities — ignited controversy for appearing at the Stonewall Inn, the legendary gay bar known for the pivotal queer rights uprising that occurred in the space 50 years ago. Swift, who's currently promoting an album, was accused of trying to profit off her LGBTQ+ fans, while Biden, a presidential candidate, was said, by some, to be simply pandering to potential donors and voters. Stonewall has long been a mecca for LGBTQ+ people, and while others are welcome, the celebrities' visits raise an important question: How can you be an ally in an LGBTQ+ space without intruding on or capitalizing off of the queer community?

Few spaces in the world are specifically designed for queer people or dedicated as queer spaces. Because of that, places such as Stonewall Inn are proverbial homes for countless LGBTQ+ people across the globe. Again, this doesn't mean that allies can't go to gay bars or Pride events as well, but they should come in with an understanding of the history and culture of those spaces, particularly iconic ones like Stonewall.

"It is not the queer community's job to be educators, especially at Pride. It's important for straight allies to do their own research and understand the history of Pride events before simply relying on their queer friend to answer all of their questions," says Amy Boyajian, CEO of sexual wellness company Wild Flower and who identifies as non-binary.

Boyajian adds that not only should allies be reflective and understand the significance of the queer spaces they're in, but they should stand with the LGBTQ+ community beyond Pride-specific celebrations or at times when it's potentially beneficial to their image (like what Swift and Biden were accused of doing). Allyship is necessary for any marginalized community, but how, and when, you show that allyship and exercise your straight privilege matters.

"Consider how you can enhance and support the folks of the community," Boyajian suggests. "Respect people's bodies, boundaries, and how they express themselves. Protect queer people from anti-LGBTQ+ protestors and those who are trying to cause us harm."

When in a queer space, straight allies should keep in mind that they should be there as supporters; don't take pictures of people you don't know, complain about the bathrooms (or anything inherent to the location), or do anything rude or invasive that'd intrude on others' good times.

And don't just be an observer — actually interact with the people around you. A lack of interaction can "other" or objectify LGBTQ+ people, making them feel like outsiders exclusively there for straight visitors' entertainment (rather than like, you know, human beings).

"Find a way to connect with us on a human level," says Josh Robbins, a queer, HIV+ activist, and spokesperson for the online dating platform DatingPositives. "Members of the LGBTQIA+ community want to feel connected to other members of their community and straight allies, alike. Initiate a conversation, comment on the weather, introduce yourself — just make an effort to connect with us."

While straight allies may know, of course, not to purposely exotify, other, or be homophobic toward people at queer spaces (or anywhere), make effort to avoid the subtler forms of bias that can arise. "A gay person talking to you doesn’t mean they’re hitting on you," Boyajian says, noting that if you do happen to be on the receiving end of unwanted affection, "respectfully decline like you would with any human you’re not attracted to... queer attraction, affection, and love is not wrong so don’t treat it as such."

On a similar note, any good ally should understand that identifying as LGBTQ+ is not strictly about sex and sexuality. "Queer love has been stigmatized and queer people labeled as overly sexual," says Boyajian. Allies should work — not just in queer spaces, but in everyday life — to help eliminate misconceptions on the matter, and recognize that queer spaces are not meant to be playgrounds for fetishization or over-sexualization.

Further, it'd be helpful if straight people privileged enough to feel safe in spaces not designated as queer could use that privilege to help make those spaces safe for LGBTQ+ people. "I'd love to see allies taking a vocal stance against businesses via social media and in person that discriminate against our community — or even commit to shopping only where hate is prohibited," says Robbins.