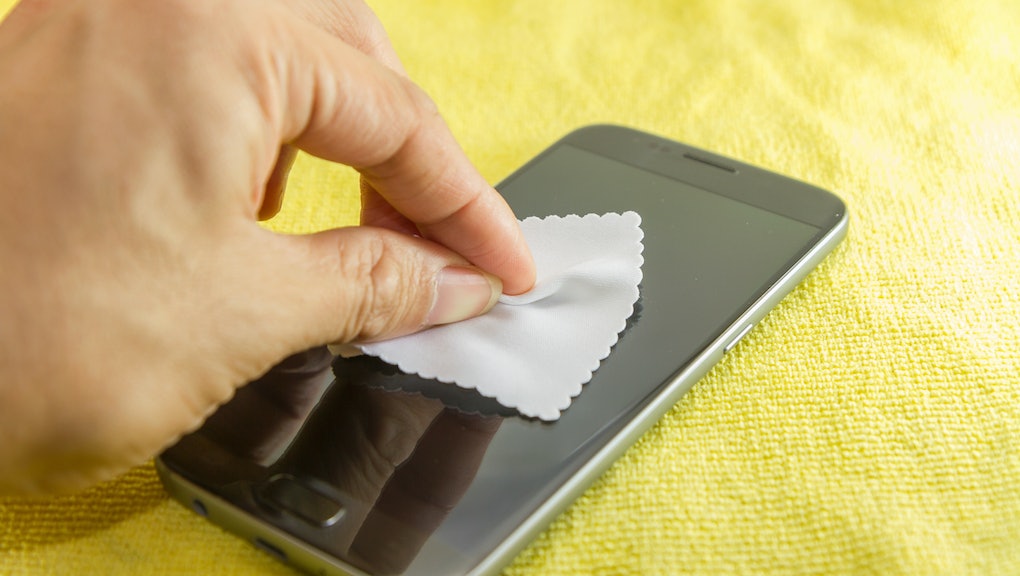 How to clean your smartphone because it’s full of germs

Disinfectant wipes are flying off the shelves in some stores due to coronavirus fears, but there's a decent reason why people should use at least one of the cleaning wipes for their smartphones. Mobile devices, according to researchers, can become a host to a number of bacteria such as streptococcus (strep throat), MRSA, and E. coli. And don't count out what happens when people bring their phones into the bathroom, either. A study in 2011, by the London School of Hygiene & Tropical Medicine, discovered fecal matter on one out of every six smartphones. That's pretty nasty to think about when you consider all the places our phones touch — like the kitchen counter, the top of the toilet tank, work desks, and, uh, the human face.

Although some number of healthy bacteria are expected on any surface, including our faces, smartphones tend to collect more than one would be comfortable with. And it's not just a matter of making sure a device doesn't touch a dirty surface; human hands don't help at all, either. Many people touch objects on a regular basis — like stairway railings, light switches, credit card readers, the McDonald's touchscreens (that also tested positive for fecal bacteria), and computer keyboards — and grab their phone immediately after. Without regular cleaning, phones can then harbor any germs your fingers picked up.

Dr. Charles Gerba, a microbiology professor with the University of Arizona, described mobile phones as "mobile germ devices" to USA Today. "You get a germ on your hand, and you use your phone," said Dr. Gerba. "Then you go wash your hands later, but the germs are still on your phone."

"We touch more surfaces than any generation in history, from ATM machines to self-checkout counters," continued Dr. Gerba. "So, you're picking up germs all the time on your hands and fingers, putting them on your cellphone and bringing them close to your nose, mouth or eyes."

So what can be done about our precious, personal, little germ devices? The answer is pretty simple: Remember to clean your phone every now and then. Samsung, one of the top-selling makers of Android phones, recommends using a soft, lint-free cloth to clean the phone every day. Microfiber cloths are useful to have around for these sorts of things, since they can wipe away smudges pretty well. Paper towels, on the other hand, "can give the appearance of scratches and doesn’t leave your phone as clean as a lint-free cloth would." The company also suggests disinfecting your phone with a "wet wipe" once a week.

Apple, in true Apple fashion, has different recommendations depending on the iPhone's model. However, the common instructions between all of them are to wipe the phones down with lint-free cloths after unplugging all cables. If necessary, make the cloth slightly damp to clean stains that won't come off dry. The company notably suggests against using any cleaning products on the iPhone, since each iPhone model has some sort of "oil-repellent coating" that can be worn off by cleaners.

Lastly, be sure to clean your smartphone case, too. Tough plastic, rubber, and silicone cases can be washed and scrubbed with dish soap. Wooden cases need more gentle treatment due to the risk of becoming warped if soaked. These cases prefer being wiped down with a spray bottle of water and vinegar solution. Leather cleaner can be used for leather, of course, though a lightly damp cloth might be able to help as well.

As tedious as it might seem, these tasks don't usually take very long. Regularly cleaning our mobile phones, combined with daily hand washing, can only help with personal hygiene. Or, at the very least, it can reduce those unwanted thoughts about fecal matter all over our phones, ew.

This article was originally published on March 4, 2020