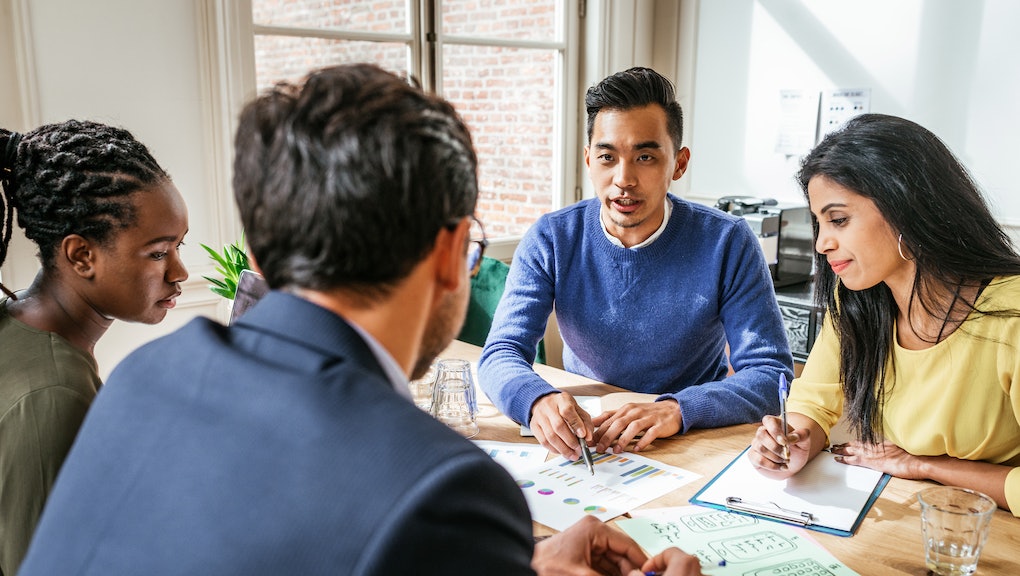 How to deal with social anxiety at work

As someone who’s struggled with social anxiety, I used to dread meetings. Questions and comments would swirl in my head, but I’d dismiss them as stupid and end up not saying anything at all. On the rare occasions I did speak up, I was positive everyone noticed my voice quavering, which, of course, only worsened my anxiety. At the same time, I knew contributing to meetings could raise my profile among my bosses and accelerate my career. I felt stuck.

Although meetings still aren’t my fav, thanks to therapy, I participate in them much more than I used to. In other words, you can still be great at meetings, even if you have social anxiety.

First, though, it’s important to note that social anxiety occurs on a spectrum. We all experience it to some degree, Jessica Engle, a therapist in the San Francisco Bay Area, tells Mic. At the extreme end, those with social anxiety disorder have an intense, pervasive fear of being embarrassed in front of others, which can emerge in the workplace or other settings.

A number of things are happening in the mind of a person with social anxiety during a meeting. Biologically, their central nervous system registers the meeting as a threat, making them go into fight or flight mode, which prevents them from accessing their prefrontal cortex, the sophisticated control center of the brain that allows them to string together sentences and relate to others, Engle explains.

Meanwhile, their inner experience is marked by noticing an impulse to participate, yet feeling like they can’t. They might debate speaking up and berate themselves for not doing so, thinking they look weird as a result, which makes them feel more embarrassed. “It just spirals from there,” Engle says.

Outwardly, this could look like having a hard time speaking up or contributing an idea they feel good about, but stumbling over their words in doing so. They might also tremble, blush, or sweat, which they worry will reveal their anxiety to others, making it worse. Or, their mind might start racing. “They’ll think of a million things they could potentially say to somebody and not calm themselves to say something coherent, or their mind will go blank,” Engle says. They might also ruminate over self-critical thoughts before, during, or after a meeting.

The good news is, you can take steps to manage your social anxiety and learn to speak up more in meetings. Here’s how, based on insights from Engle, as well as what’s worked for me.

Remember that you’re not alone

“There are a lot of people who struggle with this,” Engle says. In fact, social anxiety disorder alone affects 15 million adults in the US, per the Anxiety and Depression Association of America. If you have the means, seek a mental health professional who specializes in cognitive behavioral therapy, which focuses on understanding and changing negative thought patterns, and has been shown to be effective with social anxiety. Somatic-based therapy can also help you get in touch with your body and have more influence over it when it enters flight or fight mode.

If you can, squeeze in a quick walk or yoga flow before the meeting, which can allow your body to release stress through movement, Engle recommends. I’ve found that even a stroll through the hallway helps loosen the tension I tend to hold in my stomach, calming me as a result.

If you don’t have time for a workout, sip on some herbal tea, or do a little self-massage (get your mind out the gutter — I'm talking about some shoulder-kneading in a bathroom stall), which can be brief ways to comfort yourself before a stressful situation.

Set a goal for your next meeting that lies a little beyond your comfort zone — something that registers between 30 and 50 on the anxiety scale, with zero being NBD and 100 being absolutely terrifying. Once you feel comfortable with that, set a slightly loftier goal that still lies within the 30 to 50 range. Basically, you want to work with your nervous system; you don’t to overwhelm it, but you don’t want it to remain complacent, either, Engle says.

Maybe start by smiling and saying “hello” to the coworker beside you before the meeting. At your next meeting, try to contribute one comment, or at least ask a question. Aim to add several comments to the meeting after that. Before you know it, you might even be leading a meeting yourself.

“A lot of people with social anxiety are used to attempting to motivate themselves by being harsh and on themselves,” Engle says. “Their inner critic tends to be quite loud.” If they stay tight-lipped during a meeting, they might think to themselves, “You’re doing it again. If you don’t fix this, you’re going to lose your job.”

Speaking to themselves as they would a best friend or partner, on the other hand — reassuring themselves with something like, “We’re going to get through this, and I care for you, regardless of how this meeting goes”— is much more soothing on their nervous system and more likely to make them feel comfortable enough to speak up. It sounds a little extra, but it's private and it's worth it.

That said, developing an internal ally can take time, Engle says. I’ve been in therapy for three years, and I still struggle with it. As cheesy as it sounds, I’ve found that visualizing myself aiming those harsh words at my childhood self helps snap me out of it. “It’s a pretty radical shift for people with social anxiety,” Engle says, “but it is doable.”

Focus on your environment

Use your five senses: Observe the color of the walls, the feeling of the chair you’re sitting on, any smells, Engle says. This way, you hopefully shift your attention beyond your anxious thought patterns, exit fight or flight mode, and bring that prefrontal cortex back online. In some meetings, I’ve noticed I’ve been so caught up in my internal monologue that I haven’t listened to anything that’s been said. Focusing on whoever’s speaking forces me out of that negative spiral.

Get your thoughts out

People with social anxiety “stay isolated with their internal dialogue and loop the same self-critical take,” Engle says. Getting those thoughts out of your head, either in a conversation with someone you trust, or in a journal entry, can help you examine them more closely and see how distorted they are. You can do this as you gear up for a meeting, or after a meeting that didn’t go as well you hoped. In the process, you might notice how you cling to the negative (like how your boss frowned at you) and dismiss the positive (like how they also complimented your work).

I prefer journaling my negative thoughts and challenges to them; somehow the act of writing about a thought pattern seals it in my memory and makes me less likely to repeat it later. It’s also nice to flip through my journal every now and then and appreciate I’ve far I’ve come.

Learning to feel comfortable in meetings is definitely a process, but learning to work with your nervous system by examining your thoughts, and being nice to yourself, can help you take the first few steps.