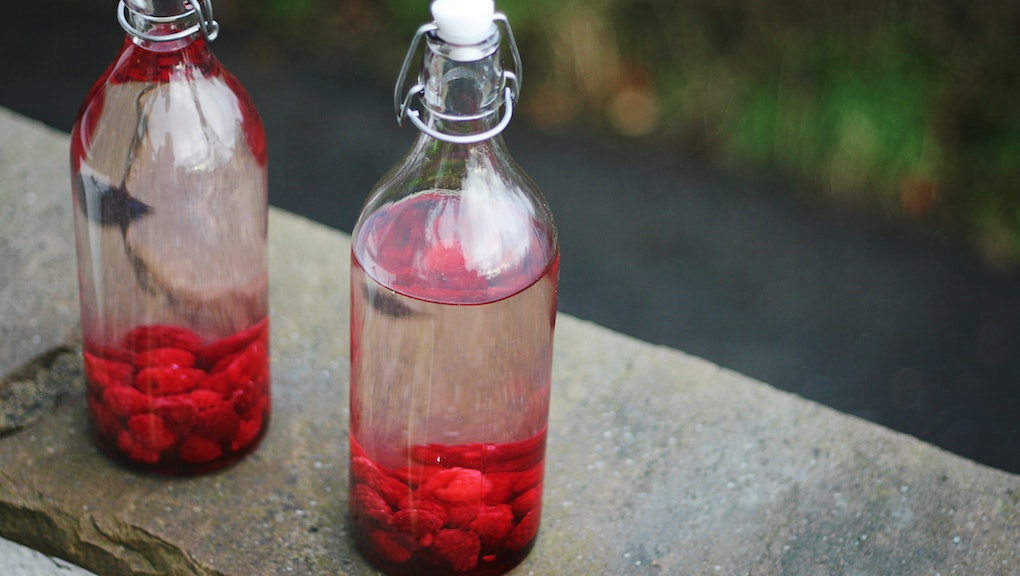 How to infuse alcohol at home like a fancy mixologist

If you’ve scrolled through Instagram at all during the pandemic, you’ve probably noticed everyone and their mom baking bread to cope. Our advice: Leave the stress baking — and meltdowns over sold-out-yeast — to them, and infuse your booze instead. If you’re among the many cooped-up souls winding down with a cocktail these days, chances are, you’ve already amassed a nice stockpile of liquor, making DIY infusion the perfect quarantine pastime.

An infusion basically involves steeping fruit, spices, or any other solid food product in a liquid — in this case, alcohol — so it absorbs the flavors in the food, explains Neil Grosscup, CEO of Tanteo Spirits. Here’s a step-by-step guide to infusing liquor at home, according to Grosscup and some passionate mixologists I had the pleasure of consulting.

Get your supplies together

All you really need is a sealed container. Most of the experts we spoke to recommend mason jars. Or, use the bottle the spirit came in, says Dev Johnson, principal bartender at Employees Only, a prohibition-style bar in New York City. Basically, “nice food-grade plastic or glass is ideal,” says Laura Sanfilippo, co-founder of Duke’s Spirited Cocktails in Healdsburg, California.

Grosscup notes that a strainer, cheesecloth, or coffee filter will allow you to remove the flavor-imparting ingredients, and their residual cloudiness and particles, once you’re ready to imbibe. But as long as you can fish them out somehow, you’re golden, says Bombay Sapphire brand ambassador Ryan Wainwright.

“Generally, the stronger the spirit, the better it will be at extracting flavor,” Demetrious O’Neil, a consulting mixologist and bar manager in Brooklyn, tells Mic. Ideally, it’ll be at least 80 proof — that is, at least 40% alcohol by volume.

Stay within the 80-proof range for fresh ingredients, to avoid extracting unwanted flavors, Sanfilippo suggests. A 90 or 100-proof spirit will do a better, faster job at extracting flavors from dried ingredients. Grosscup says to use a good-quality spirit that you'd drink straight, especially if the ingredients you plan to add have a subtle flavor.

Think of your favorite cocktails and what flavors they pair with the base spirits, Grosscup suggests. Tropical fruits, like what you’d find in a piña colada, will likely work well with rum, while cherries, like you might find in a Manhattan, will probably work well with whiskey.

Keep it simple. A full piece of fruit will result in “a cacophony of flavor," Grosscup says. "You might get a bitterness from the pit. The peel will infuse at a different rate than the juice, which you might not even want to infuse at all.” Instead, narrow it down to, say, the rind.

Avoid soft, liquid-y ingredients, like peach and watermelon, which tend to fall apart and leave behind sediment. “It’s not going to be bad, flavor-wise, but it doesn’t look as good,” Sanfilippo says. "It might leave a weird texture, as well."

If you’re a newbie, she suggests starting with tea bags, which remove the need for straining, or citrus zest (but avoid adding the bitter white part). “Grapefruit rind is really yummy infused into tequila," she says.

To get the most flavor out of your ingredients, expose as much of their surface area to the spirit as possible by coarsely chopping them beforehand, O’Neil says — not mincing them, which can cause them to dissolve and make them a pain to strain out.

The quantities you use will depend on what you want to infuse and your personal taste, but a general rule is to add one part solid ingredient to 16 parts alcohol, Grosscup says. He and most of the other mixologists we interviewed suggest infusing at room temperature. The alcohol will help preserve any fresh ingredients, so don’t worry about them spoiling.

If you’re a newbie, she suggests starting with tea bags, which remove the need for straining, or citrus zest (but avoid adding the bitter white part).

Infusions typically take a few days. Hardier spices, like cinnamon sticks and star anise, take around three to four days, while fresh fruits and vegetables take one or two, Sanfilippo tells Mic. “Citrus peels are pretty quick,” O’Neil says. “They infuse within eight hours.” He adds that spices take only eight to 24 hours — even less if they’re on the hot side, like jalapeño, Wainwright says.

An alcohol infusion isn't like an Instant Pot dish; you can't just set it and forget it. Every day, you’ll want to gently shake it to speed up the infusion process, and, most importantly, taste it, Sanfilippo says. Otherwise, you might over-extract and pull out unwanted flavors. When you hit your flavor sweet spot, strain out the added ingredients immediately. Since alcohol also extracts pigments, a vibrant color can also indicate that your infusion is close to ready, O’Neil says.

If waiting’s not your thing, a try a hot infusion. Here’s how Johnson does it: Pour a third of a bottle of your spirit of choice, along with the ingredients you want to infuse it with, into a saucepan. Slowly heat up the liquid. Once it starts to bubble, turn off the heat. Let it cool for 10 to 15 minutes, strain out the ingredients, and pour it back into the bottle.

Sure, following the guidelines above ensures you don’t end up with inedible sludge, but otherwise, the world is your oyster. Get creative —and avoid wasting booze — by trying different types of flavors in a few small jars to start, Sanfilippo suggests.

You could experiment with simple syrup, O’Neil says, stirring it into lemon-infused vodka for a lemon liqueur. Recently, Wainwright infused Bombay Sapphire with chopped strawberries in his fridge for four hours. He strained out the strawberries, froze them, and used them to chill his delightful pink concoction. “Just gravitate toward what you love, and play around."