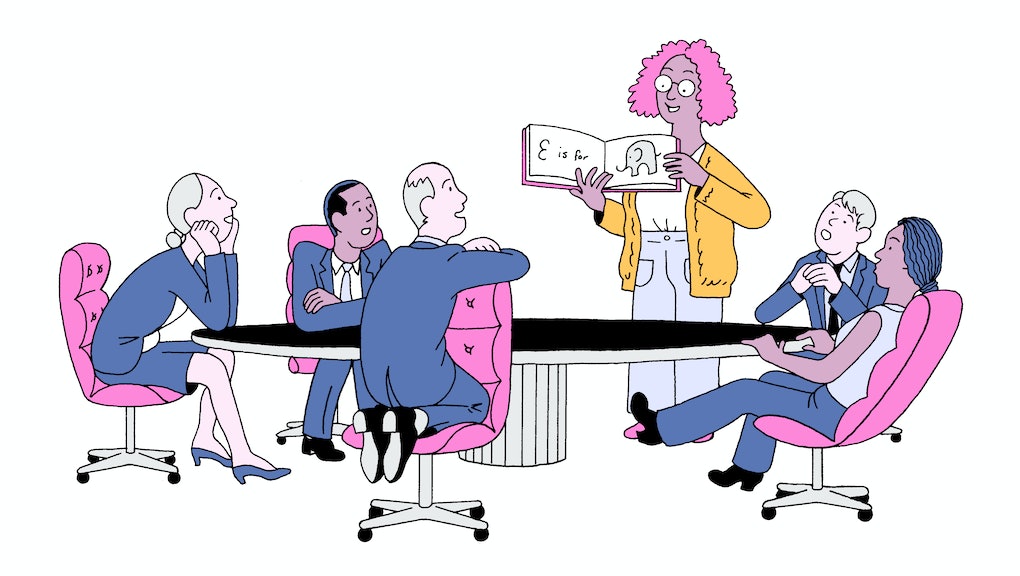 How to keep people's attention in a meeting, according to kindergarten teachers

In a world where we face an onslaught of distractions every day, those charged with leading meetings at work are up against unprecedented competition (e.g.: Twitter, a pigeon at the window, hunger) for their colleagues’ attention. Since meetings should be both helpful and tolerable, we decided to get insight from the ultimate experts in captivating an audience: kindergarten teachers.

These living saints know how to command a room firmly and justly without boring humans to death or coming across as attention-hungry dictators. Corporate CEOs, world leaders, and celebrity influencers all got some of their first lessons in captivating an audience from these early childhood educators. And so, Mic consulted three kindergarten teachers for their best advice on keeping someone’s attention — particularly at work, where it's especially challenging.

Meghan Fitzgerald is co-founder and chief learning officer at Tinkergarten, an early education program focused on outdoor learning, and has 18 years classroom experience. When the pandemic kicked in, she and her team of teachers were undaunted by the task of teaching a highly distractible population over Zoom.

While Fitzgerald agrees that visual tools can be helpful with keeping students’ attention, engaging only one of your senses isn’t all that engaging. She likens focusing only on visual learning to only exercising one muscle in your body. The more senses that we employ during a class or meeting, she says, the more attentive we’ll be overall.

“We think about having five senses, but there’s actually more,” Fitzgerald says, referring to proprioceptive and vestibular senses which allow our bodies to perceive movement, lack of movement, and head positioning.

She suggests encouraging meeting attendees to get up and move their bodies regularly and engage multiple senses to stay focused. Teaching outdoor classes gives her students a wealth of opportunities to touch, smell, hear, and move their bodies freely. While most corporate meetings don’t afford the same sensory luxuries of a well-appointed classroom, we can still move around our workspace, take a sip of a tasty beverage, or touch different things around the room to give our bodies more sensory input to stay focused.

If you have a recurring meeting with coworkers, Fitzgerald says that knowing what to expect in a classroom or a meeting establishes norms and puts attendees at ease, making it easier for them to focus on what’s in front of them and what’s coming next. This doesn’t mean you have to present the same material in the same way every time; having a plan or an exercise in place can give the meeting a sense of flow, while ensuring active participation and an established beginning and end.

For the love of god, keep it short

Natalie Grant was a preschool and kindergarten teacher for over six years, specializing in music, so she knows a thing or two about the cacophony that can come along with a long-suffering meeting. “It can be game-changing to realize that adults are simply kindergarteners in bigger bodies with more responsibilities,” says Grant. “Young children learn best when they have short periods of focused learning followed by play. Big people actually work in pretty much the same way.”

While your 47-slide PowerPoint deck on marketing proposals may make you look thorough and hardworking, you’ll likely lose your audience before getting to some of your most important points. Keep it succinct, send your coworkers outside to play, and you’ve got a much better chance of having your presentation stick in their minds.

Shelby Rodriguez was a kindergarten teacher at IDEA Public Schools in Austin, TX for three years and says rewards work in keeping both kindergarteners and adults focused in meetings. She offered “points” to students for showing engagement that let them work towards prizes. “Children at that age love games and initiatives like prizes. I will praise students in front of the classroom if they do a great job and give them a reward like a sticker,” she says.

We all know that incentives keep grown people motivated too — even if they’re small. “During our professional development meetings and trainings, our principal will even give out prizes to our staff if we're able to complete a task,” Rodriguez says. “I know she uses this method to double check if our entire staff is paying attention during our trainings and can prove it in doing so to receive a prize, such as a Starbucks gift card. I'm always trying to win those.”

Switch up your means of communication

Fitzgerald says that using basic American Sign Language to indicate “yes,” “no,” and “thank you” in meetings helps keep kids engaged and keeps meetings more succinct. “Having people say the same thing five different times in a meeting isn’t a good use of time,” says Fitzgerald.

Instead of having coworkers deliver the famous “let me piggyback on what she said” and then restating the previous speaker’s point as their own, have your colleagues respond to points with simple “Yes” or “No” hand signals, especially when conducting meetings via video conferencing. This also cues meeting attendees to focus back on the screen and check in visually to see colleagues’ responses. If everyone is in agreement just keep moving. If someone disagrees and has a specific callout, give them time to present their opposing point.

More like this
Your burnout is about more than just your damn job
By Tracey Anne Duncan
We learned collective grief from 9/11. We could really use those coping skills right now
By Melissa Pandika
What is sploshing, the food fetish that's taking over TikTok?
By Melissa Pandika
Stay up to date