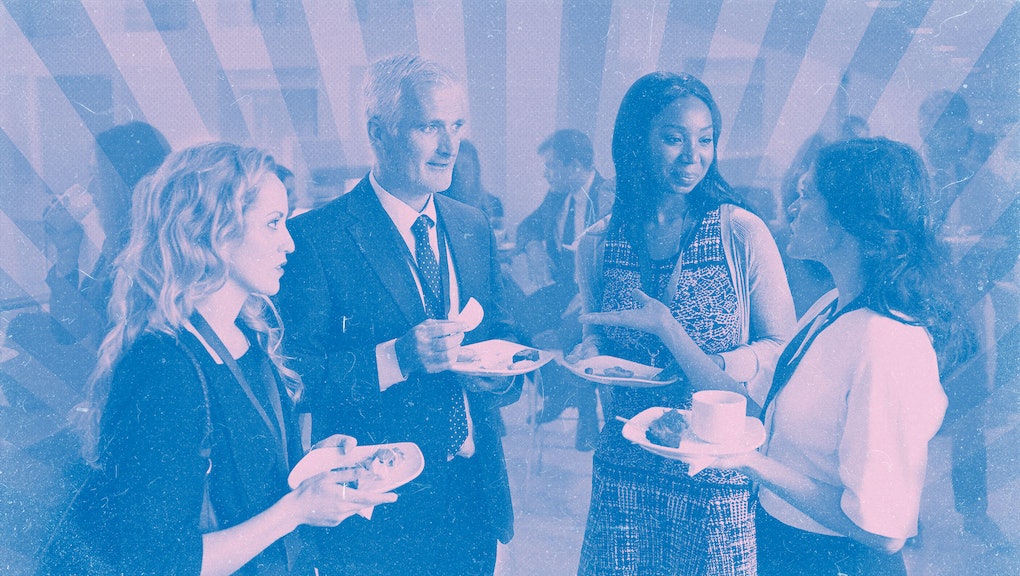 How to network successfully without coming off like a professional leech

For both career veterans and those just starting out in the workforce, learning how to successfully network can be a daunting prospect. Not only do you have to manage to approach and, hopefully, impress complete strangers, but you also must find the right balance of talking yourself up without coming off like a walking salesman. And in addition to the anxiety of the actual events, there’s the emotional hangover that commonly comes after the fact — the worry that you might've come off like a professional leech or social climber.

Research backs up just how normal that concern is among people at every career level. According to a Harvard Business School study from Administrative Science Quarterly, the majority of professionals report feeling “dirty” after networking, particularly those in low-powered, entry-level jobs, since they have a longer way to go up the ladder. Unlike a familial tie or friendship that grows from a genuine connection, networking is built on using others as vehicles to get ahead, an idea that can seem immoral, according to the study — so much so that some people even feel physically unclean after a networking event.

These negative reactions can lead to decreased work performance, since they discourage people from continuing to network, which negates the practice's purpose entirely. So what’re you to do the next time you're invited to a networking event you know could be useful, but you predict will leave you feeling slimy? Here’s what some career experts advise.

First things first, remember that any negative feelings you have about yourself are cognitive distortions, inaccurate thought patterns that reinforce negative self-talk. According to Sian Beilock, Ph.D., cognitive scientist and president of Barnard College, we often see ourselves as inadequate or less-than in professional settings like networking due to impostor syndrome, the internalized feeling of fraudulence that affects nearly 70 percent of the population at some point in their lives.

“Remember that folks who experience imposter syndrome actually tend to perform at a high level, despite their worry,” Beilock tells Mic. “This means that the people you're trying to connect with won't likely see your feelings of being an imposter, only your stellar work. Knowing this can be enough to help keep some of those pesky worries at bay.”

So no, you’re not a fraud, nor a leech, nor a social climber — just a fellow professional trying to do the best they can.

Re-frame the idea of networking, too

When you think of networking, stuffy images of pencil skirts, crowded bars, and awkward conversations probably come to mind. If you move outside of those parameters, though, it can alleviate the pressure. “Instead of forcing yourself into a situation that feels totally unapproachable and foreign, I advise younger employees to reframe their idea of what it means to network,” says Kat Cohen, Ph.D., CEO and Founder of IvyWise and author of The Truth About Getting In.

Networking meetings don't need to be formal or planned. Cohen recommends striking up a conversation with someone in a coffee shop or workout class in an organic way, noting that it’s also worth approaching people in different fields than your own. You never know what you’ll be able to learn from them, or who they’ll introduce you to. Plus, chatting with folks across all industries is good practice for when you finally do come across someone in your desired field with whom you want to chat.

Don’t ask to be introduced

The saying goes, “It’s not what you know, but who you know.” And while it’s certainly a smart move to get acquainted with the right people, you should do your best to forge those connections on your own. It can take a seasoned professional years to built a contact list, so if you reach out to someone solely for access to one of their contacts, it'll seem as though you’re stepping over them to get to someone better, leaving both of you feeling gross.

Imagine if someone who bullied you all throughout high school approached you 20 years later requesting career advice. Wouldn’t you feel taken advantage of? When figuring out who to network with, make sure you’re connecting with someone with whom you share either a neutral or positive history, as when people know that they share the same background as you, they'll feel more inclined to connect.

Cohen recommends tapping into your college’s alumni network if you need a place to start. “Even if it’s been years since you’ve attended school, look out for alumni events, especially if they are geared towards a specific major or career path that interests you,” she says.

That doesn't mean you have to re-connect with the entire student body, of course; Beilock recommends setting your sights on folks in a similar position as yours. “If you’re a woman in a field mostly dominated by men, try to find the women who are there,” she says. “Ask them for tips about other professionals in the field who have a track record of working well and promoting women. You want to find your best allies and it’s important to remember that they don't always have to hold the same identity as you to be on your side.”

Learn how to listen

If you talk someone's ear off about all your accomplishments and why you think you’d be a great fit for their company, they'll feel trapped in a job interview they never signed up for. Networking should be a two-way conversation, where you discover as much about the other person as they do about you.

“Learning how to listen to what someone else is saying and keeping the question-to-comment ratio at about 50:50 is key, and both of these skills can require some practice,” says Cohen.

While nodding and smiling in silence is one way of listening, it doesn’t convey to the speaker that you’re fully engaged in what they’re saying, and it could make them think you’re just counting down the minutes until it’s your turn to speak again. According to research conducted by Harvard Business Review, people with the strongest listening skills actively engage in conversation by following up with thoughtful questions, and boosting the other person’s confidence by encouraging and supporting their ideas.

Basic courtesy counts for a lot — especially when someone has taken the time to help you with no real obligation to do so. Many people refrain from saying thank you because they assume the other person already knows they're thankful, or they just feel awkward doing so, according to a recent study from Psychological Science. But not telling someone you're networking with that you're grateful for their time is the quickest way to make them feel used. It never hurts to offer to buy them coffee or lunch as a way of showing thanks, but if that doesn't seem doable, simply thank the person at the end of your conversation. And if you have their contact information, send them a courteous follow-up note within 24 hours.

"If you're dreading sending that email because you're worried about what someone might think, write the email in one sitting and send in the next. When folks have mental blocks, approaching tasks that seem daunting in smaller pieces can help," says Beilock.

After someone generously offers you their time and insight, it's ideal if you try to pay them back in some meaningful, equivalent way, be it a lead on a new opportunity or a second pair of eyes on a project they’re working on. But if you’re just starting out in your career and you’re worried that you have little of value to offer, fear not. According to Beilock, simply asking the person engaging questions can inspire them to see their own work in a new light.

“Research shows that you don't have to know the most or be the smartest person in a room to contribute to an optimal outcome," says Beilock. "If you go into a situation just wanting to learn and ask questions, these questions will no doubt push coworkers to think about their projects in a new way or from a different angle and that is helpful.”

If you fear that networking will make you come off greedy or awkward, remember that there are always ways to improve, and that you’re not alone in that feeling. Most likely, though, you're already doing a lot better than you think.

More like this
Amazon wants to legalize it
By Melissa Pandika
How to end a text conversation without being rude
By Tracey Anne Duncan
100 years after the country's largest labor war, its dark legacy still looms
By Kim Kelly
Stay up to date