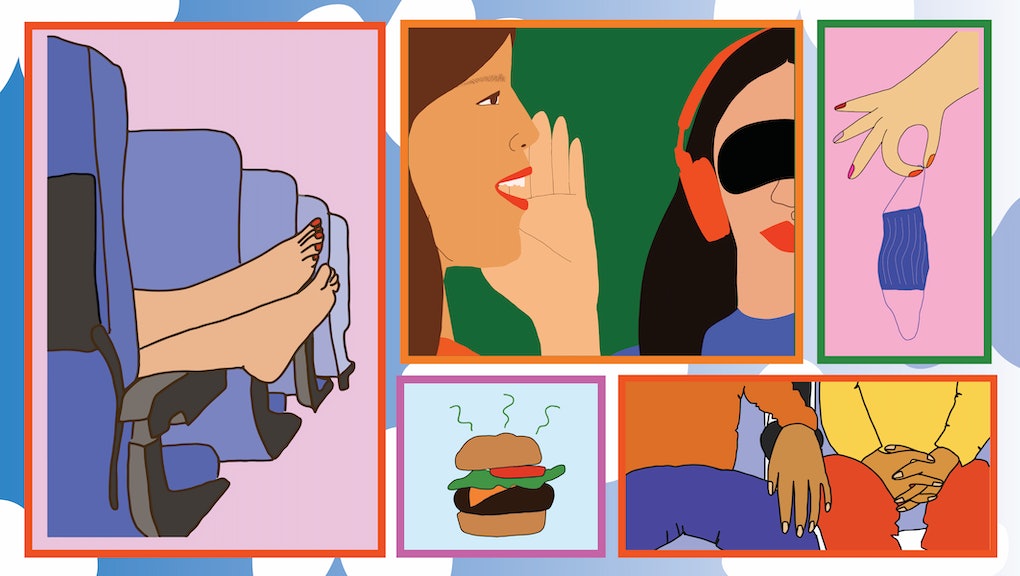 How to not be a jerk on the plane, according to flight attendants

In recent months, videos of airline passengers misbehaving have become as much a fixture of pandemic life as masks and WFH athleisure. It seems that not a week goes by without police needing to escort an unruly passenger from a plane. Some altercations have taken a violent turn, with passengers punching and even biting flight attendants. Honestly, what has become of us (well, not so much "us" as "these fools," because I am an angel on the plane)?

As of July 27, there have been 3,615 reports of unruly passengers, per the Federal Aviation Administration — most of them due to refusal to comply with the federal mandate that requires masks on planes and public transportation. The FAA investigated only 183 such reports in 2020 and 146 in 2019, before the pandemic. And flight attendants seem to be on the receiving end of many of these incidents. Here’s how they want us to treat them, especially as more of us start feeling comfortable with flying again.

First, try to sympathize with the challenges flight attendants have had to navigate during the pandemic. “It’s been an incredibly rough road,” says Paul Hartshorn, Jr. of the Association of Professional Flight Attendants (APFA), the union for American Airlines flight attendants. Last spring, “the airline industry started to downsize literally overnight.”

“I was working a lot less, and because we’re hourly, that made a huge dent in my paycheck,” says Alice, an American Airlines attendant who asked Mic not to include her last name to protect her privacy and avoid hurting evaluations of her work performance. Being furloughed “hurt even more.” Many managers and support staff were fired, she says, while others took early retirement packages. Labor unions like the APFA fought to establish and extend the Payroll Support Program, Hartshorn explains, which allocated funds to keeping pilots, reservations agents, and flight attendants like himself employed and covered under their healthcare plans.

Despite these efforts, though, airlines remain understaffed as demand for flights rebounds faster than what many had anticipated, Hartshorn explains. “Consequently, you’re seeing airlines that are having growing pains, staffing pains,” he says, especially in May and June, as storms swept across much of the country, resulting in frustrating delays.

While Hartshorn says flight attendants are happy that passengers are back, the unprecedented spike in hostility from them has been, well, a lot. Early on in the pandemic, “a lot of people were just grateful that they were flying at all” and understood the need for public health precautions, Alice says.

Now, not only do passengers bristle at needing to wear masks, “even the most basic and normal requests like putting tray tables up or fastening seatbelts are met with eye rolls and arguments," she says. Recently, she’s had to confront passengers for vaping and pouring their own alcohol on board (both of which are illegal, by the way).

Unsurprisingly, alcohol seems to exacerbate unruliness among passengers, Hartshorn says, whether they bring their own or down a drink at the terminal before boarding. So if you know that a few drinks makes you belligerent, try not to overindulge when flying.

In many cases, passengers verbally and/or physically attack not only flight attendants, Hartshorn says, but each other — again, usually over someone refusing to wear a mask. These incidents are dangerous, period, but all the more so at 35,000 feet in the air, he points out. At best, they can disrupt or delay a flight — and at worst, they could cause a terrible accident.

All of this is to say, wear a mask (which should cover your nose, too, not just your mouth). Besides being required by federal law on board, masks can offer protection on oftentimes full flights, where social distancing is impossible, Hartshorn explains. Plus, “we still have unvaccinated people on the plane,” he says, including kids under 12 who are ineligible for the vaccine. “We have to protect them.”

And if anyone gets the inconvenience and discomfort of masks, it’s flight attendants, who need to wear them for hours on end — “but right now, it’s what we have to do if we want to be able to have access to safer travel,” Hartshorn says. “We should not be mistreated like this when we’re trying enforce a federally mandated rule.”

We’re all understandably on edge now, but before you snap at your flight attendant when they ask you to fold up your tray table, remember that they’re just doing their jobs. Having to constantly deal with attitude from passengers makes Alice feel "undervalued" and “like a cop.” “I don’t want to be a cop,” she says. “I want to be a flight attendant and have fun at work and focus on my job of keeping people safe and secure and comfortable.” A passenger arguing with her over tray tables means she could miss a security threat, or worse. “If people could just understand that I’m doing my job and simply comply with my instructions without argument or sneaking around, that would help a lot.”

Alice also wishes passengers would understand that amenities like movies and WiFi are luxuries. The airline can’t guarantee them, and flight attendants aren’t technicians who can fix them at a moment’s notice. Focus instead on what truly matters: getting to your destination in one piece. “My job is complicated and requires a lot of safety and security training,” Alice says. “Getting [a passenger] a can of soda sometimes isn’t our priority.”

Also, consider that flight attendants are more than stressed. They’re scared, too. “There’s flight attendants right now that fear coming to work because we don’t’ know when the next issue is going to happen,” Hartshorn says. “We don’t know what’s going to set someone off.” No one should have to worry about getting attacked at work.

Given the harsh realities of their jobs these days — many of which they didn’t sign up for — common courtesy can go a long way for flight attendants, especially during boarding, which Hartshorn says is when many disruptive incidents occur. He suggests saying “hello,” “thank you,” and a kind word — maybe, “I appreciate you”— and making eye contact with them, just as they do with you.

Something else that can make flight attendants’ lives easier: Removing your headphones when they approach your row. “I have questions about drinks and snacks, and I can’t do my job if you’re ignoring me or listening to loud music while I’m trying to talk,” Alice says. The least you can do is acknowledge their presence.

If you know that a few drinks makes you belligerent, try not to overindulge when flying.

If you really want to show flight attendants some love, and you have the means, “gift cards are always fun!” Alice says. “We love coffee!” Or you could tip them. Even a dollar would help, she says, since she and her colleagues are required to tip van drivers at every hotel where they stay.

What if you notice a passenger acting up? Don’t argue with them, which Alice says can make matters worse. Be ready to hold them back if they get violent, if you have the physical ability. Enlist the help of a crewmember, Hartshorn says, since they’re trained in de-escalation techniques. And if a passenger is smoking or doing something else they shouldn’t be doing on board, Alice recommends notifying a flight attendant in private — as in, not in front of the passenger. “Mostly be cool, and let us do our jobs,” she says.

And while basic human decency should be motivation enough to treat flight attendants with respect, Hartshorn points out that interfering with a crewmember’s duties and not following their instructions is a federal offense that can carry fines and time behind bars.

Flying can be stressful enough as it is, and being bombarded with all these added public health requirements as soon as we step foot in the airport doesn’t help. But none of that excuses a failure to see flight attendants as humans tasked with the challenging job of making our flights as safe and comfortable as possible in the middle of a pandemic.

“We all need to be kinder to one another,” Hartshorn says. “So much has been politicized in this country now, and we need to just return to that kindness that we used to have.”

More like this
This growling anti-masker is the latest airplane villain to taint the skies
By Ian Kumamoto
Uncontrollable, weed-induced vomiting is on the rise, according to new research
By Tracey Anne Duncan
Amazon wants to legalize it
By Melissa Pandika
Stay up to date