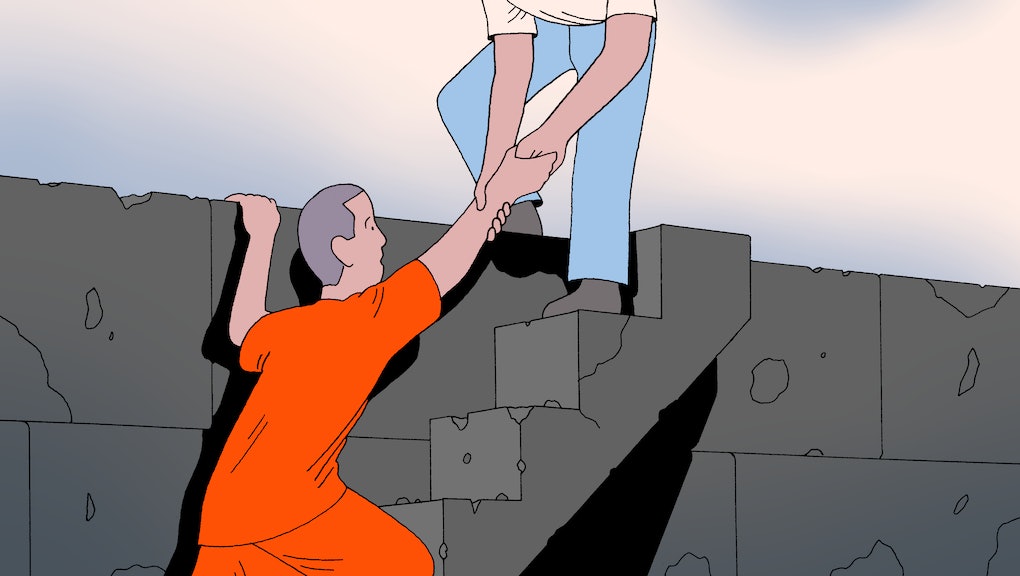 How to prepare an incarcerated loved one for life beyond prison

When Philip Melendez was released from prison in 2017, he might as well have landed on another planet. After nearly two decades of living under a strict code of respect and personal space while incarcerated, riding on a crowded train in San Francisco felt jarring. The technology that had emerged while he was inside — from self-checkout to smart phones — overwhelmed him. Since he began his sentence when he was only 19, he had to Google how to open a bank account, build credit, and other basics of personal finance.

“There are certain levels of acclimation that are hard for us to get to,” Melendez says of formerly incarcerated people. He now serves as director of organizing for criminal justice reform nonprofit Re:Store Justice. “There’s trauma we have to work through.”

Since nearly all incarcerated people return home eventually, according to the Congressional Research Service, preparing an incarcerated friend or family member for life beyond prison is as important as helping them cope with life within it. Here are six ways to support an incarcerated loved one, with insight from Melendez and others.

Send them their favorite snacks, clothes, and other reminders of who they are outside of prison

While they might’ve seemed like small gestures, the letters, cards, photos, phone calls, and visits from his family meant a lot to Melendez. After spending so much time in prison, it’s easy to forget who you are as a free person. “You start to think, this is all it is,” he says.

That was especially true for Melendez, who was sentenced to life before a change in juvenile justice legislation in California allowed him to seek parole early. “For [my family] to keep me grounded in my memories of my old self, of my real self, it was really important,” he says. He credits the bonds his family maintained for motivating him to do the inner work that likely led to him being deemed suitable for parole.

If you can, send care packages that include items personalized to your loved one, reminding of who they were before they were incarcerated. Melendez recalls his family sending him Polo Ralph Lauren jeans and t-shirts, as well as the candies and other treats his mother would buy him when he was growing up. “I know that sounds kind of ridiculous, but it was the snacks, it was the little candies that my mom used to get me or the clothes that [my family] used to get me,” he tells Mic. “It just helped me remember who I was and stay true to that person.”

Besides communicating with your loved one on a regular basis, Prison Connect also recommends keeping them in the loop about what’s going on at home and asking them to weigh in on major family decisions, which can help them feel included and empowered.

Help set them up for financial freedom

Melendez suggests putting yourself in the headspace of a young adult trying to gain their financial footing and listing everything they’d need to know — things like how to open a bank account, build credit, create an emergency fund, or buy a car. Google them, print any helpful resources you encounter, and mail them to your incarcerated loved one.

He recalls asking a bank teller after his release about how to open an account and learning that he needed his state ID first — it was still en route in the mail. Knowing that information beforehand would’ve been helpful. “There’s just so many little things we don’t know,” he says, adding that this gap in knowledge can be embarrassing for some incarcerated people to admit.

Proactively sending your loved one this information can spare them future awkwardness. “Really getting a grasp of all the things necessary, the vital documents, and the steps to financial freedom — those are super important, more than people know,” Melendez says.

Besides sending resources that walk your loved one through how to build credit, you could take a cue from Twitter user _ambmarie and actually build their credit for them — she added her incarcerated brother as an authorized user on her credit card last year. “He has 748 credit score now, it’ll probably be higher when he comes home in October,” she tweeted. Prison Fellowship also suggests saving up in advance, if you can, to help keep your loved one afloat while they establish themselves financially.

Help them mentally prepare for social norms outside prison, especially in crowded spaces

While incarcerated, Melendez needed to be extremely mindful of racial divisions, as well as a rigid code of etiquette regarding physical contact — a stark contrast to the free world, especially more crowded settings like public transit, where people constantly brush up against each other. He suggests preparing your incarcerated loved one “for the difference between prison culture and societal norms, where people don’t have those understandings, or have a different concept of people’s personal space and respect.”

If you’re able to talk to them over the phone, start a conversation about what they remember about crowded settings outside prison and how they differ from their current surroundings, Melendez says. Ask about the politics and culture where they’re incarcerated, as well as the security level, “which will also inform the level of respect and danger that they might be subject to.”

This can help you assess what they need to anticipate upon reentry to lessen the shock, he explains. If you can’t talk on the phone, mail them a letter and pose these questions as prompts they can use in a writing exercise.

Help them identify their triggers

Ask your loved one if they’ve enrolled in any self-help groups that can help them identify triggers that might make them violent or want to self-medicate, Melendez says. If not, and if their prison offers these sources of support, encourage them to participate. Programs that helped Melendez manage his anger and understand the impact of his crime allowed him to show up for his family and community, and avoid landing in prison again.

Knowing your loved one’s triggers can also help you minimize them upon their return. Melendez says that finding out this information can be as simple as writing a letter that says something along the lines of “What are you triggers? Please tell me so that we can have a nice, welcoming environment that is not triggering.”

If the prison doesn’t have a mental health program, ask the community resource manager to implement one

Self-help groups and other mental health programs for incarcerated people aren’t as widespread as they should be, Melendez says. The good news is, you can write to the prison’s community resource manager and ask them to implement one. While you can Google around and suggest a program you like, Melendez suggests that you “seek guidance from incarcerated people because we know what we need.”

Developing an itinerary to help your loved one get situated and sharing it with them weeks or even months in advance can be helpful. Melendez explains. Maybe you can have a nice meal and figure out housing on the first day, he says, and nail down a daily schedule on the second day (which can make their transition easier, given that prison life is so structured).

Make sure to carve out time for acclimating to day-to-day activities that you might take for granted but may feel foreign to your loved one, Melendez suggests, like filling up on gas or using public transportation. He recommends Googling “peer reentry navigation” to connect them with a formerly incarcerated mentor who can show them the ropes of life outside prison and might have deeper insight into their needs. Find support groups for them to join, especially if they couldn’t get that help while incarcerated — “anything that helps people unpack their trauma,” Melendez says, and navigate their new life.

More like this
Can't bear to be in a relationship right now? Blame de-cuffing season
By Suzannah Weiss
Wanting to start a family motivated us to pay off $126K in a year
By Marianne Eloise
How to embrace body acceptance without being ableist
By Melissa Pandika
Stay up to date