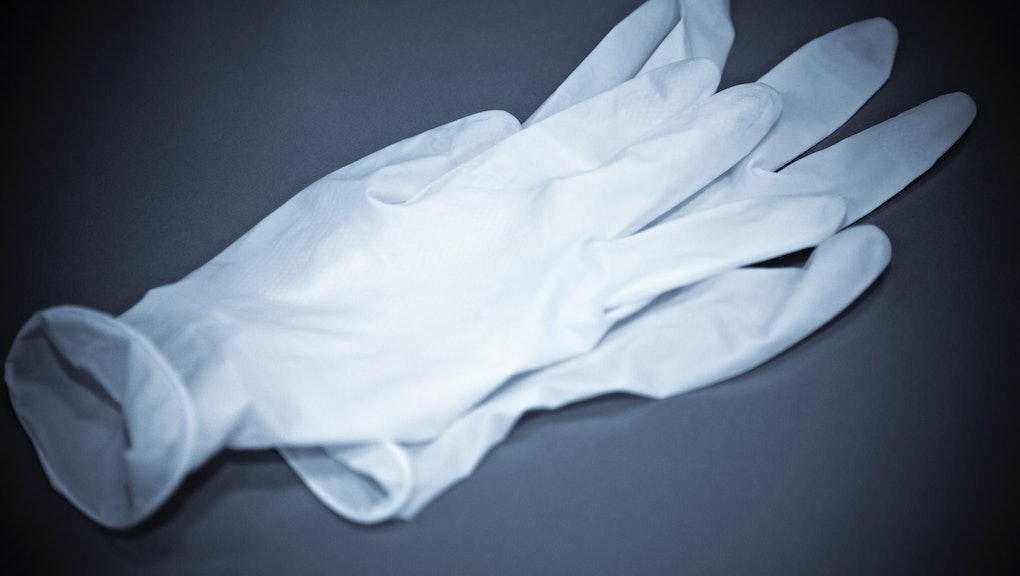 How to use disposable gloves so they actually protect you

If you’ve entered a grocery store recently, you’ve probably seen shoppers donning gloves — or maybe you’ve even begun wearing them yourself — as a safeguard against the novel coronavirus. But like any protective covering, they won’t necessarily keep you safe if you're not using them correctly. Think about them as condoms for your hands, except with a significantly higher error rate. In other words, those rubber gloves won’t do anything if you’re using them wrong.

Although the novel coronavirus seems to spread primarily through respiratory droplets when an infected person sneezes, coughs, or even just talks, per the CDC, there’s also evidence that touching recently-contaminated surfaces can lead to infection, Dean Winslow, an infectious diseases physician at Stanford Health Care, tells Mic. And as Jacquelyn Gill, a glove-wearing Ice Age ecologist and associate professor at the University of Maine’s Climate Change Institute, pointed out in a Twitter thread on Sunday, they can also keep you from transmitting germs, like coronavirus, to your face, as well as your keys, car door, or other surfaces. So, gloves can help protect you.

But Gill tweeted that her grocery runs have revealed that “people need a primer on how to use disposable gloves properly.” Here’s how to use them so that they actually help keep you safe from infection, according to Gill and other experts:

Make sure your gloves fit well

Gloves that are too tight will break, raising your risk of exposure, says Suzanne Willard, a nurse clinician and associate dean for Global Health at Rutgers School of Nursing. Those that are too loose will slide around, which can also render you vulnerable.

“The only way gloves are effective is if you change them as often as you should wash or sanitize your hands,” Gill tweeted. (Although washing your hands properly works better than sanitizing them, she noted, it might not be feasible when you're out and about.) If you touch your phone with your gloves and use them to touch your face, the phone germs are now on your face. Once you’ve touched a surface with your glove, think of it as a compromised layer of skin that you need to remove before you touch something else you want to remain uncontaminated.

Indeed, disposable gloves “can decrease an individual’s mindfulness” and “give them permission to touch everything,” Willard tells Mic. Wearing gloves (or any form of protective gear, for that matter) doesn’t mean you get to go on autopilot. Be mindful of the surfaces you touch, and change your gloves accordingly.

Learn to safely remove them

Safely removing your gloves involves a special technique that prevents them from making any contact with your skin, and bunches them into a neat bundle for disposal. In her Twitter thread, Gill suggested referring to the video below.

“I can’t believe I need to add this, but: don’t remove your gloves with your teeth,” she later tweeted. “Ever.” Doing so transfers the germs from your gloves to your mouth, Willard explains.

In some cases, hand sanitizer can reduce their effectiveness, Gill explains. Plus, as Willard points out, picking up a bottle of hand sanitizer with a gloved hand only spreads any germs on your glove to the bottle.

Safely dispose of them

That doesn’t mean tossing them on the sidewalk, as Willard has seen folks do. Doing so might put wildlife at risk, or lead someone else to pick them up, Gill tweeted. If an outdoor trash can isn’t accessible, keep them bagged up in your car in the meantime.

Wash your hands as soon as you remove your gloves, Willard says, or sanitize them if you can’t get to soap and running water — yes, even if they've been covered with gloves the whole time. Each type of glove is different; we don’t know how long the coronavirus will hang onto the gloves you’re wearing, she explains, and they might even be porous.

Also, “it’s not that easy, even when you’re very careful, to remove your gloves without being absolutely sure you didn’t contaminate your skin,” Winslow says. The sequence of movements required to safely remove your gloves can be tricky, especially if you're a newbie. Washing or sanitizing your hands afterward offers “a little extra assurance.”

Gill tweeted that you should treat disposable gloves like condoms, since their effectiveness wanes the more you use them.

Even more important than personal protective equipment is actually following the recommendations of your state and local health departments’ shelter-in-place and other social distancing measures, Winslow says. Willard agrees. Gloves and the like often lull people into a false sense of safety, convincing them they can go out as much as they want. “No, you cannot be going out all the time,” she says. “You need to be staying home.”