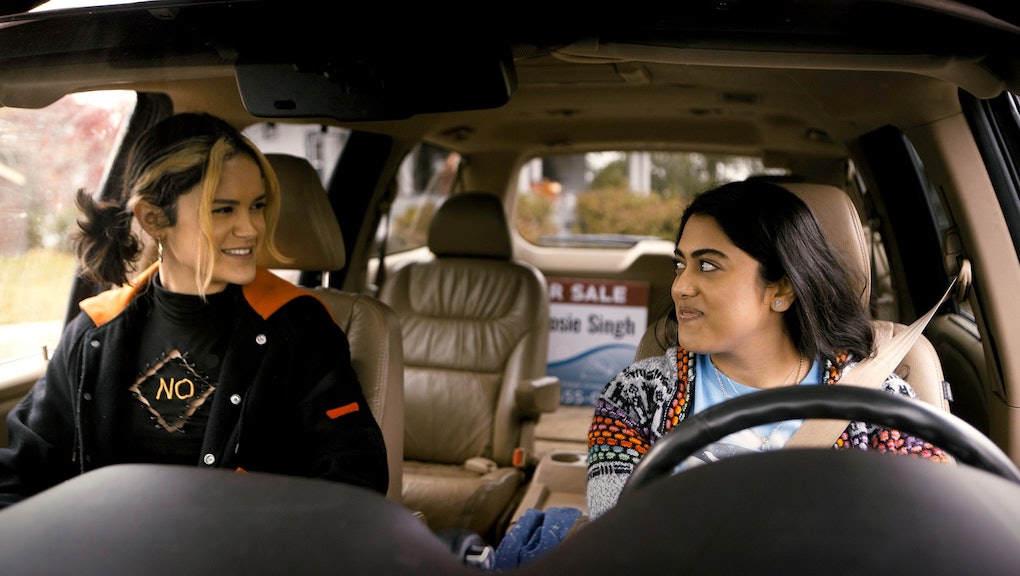 Hulu’s ‘Plan B’ is an empathetic, insightful evolution of the teen sex comedy

It doesn’t take long for the new Hulu comedy Plan B to give us a sense of the kind of movie we are about to watch. The film opens with the archetypal teenage morning routine — the classic introductory montage, typically set over a bouncing, get-up-and-go pop or rock track, of a young adult either begrudgingly or overzealously preparing for another day of high school. We are ushered immediately into the comfortable arms of genre. Only this time, part of the routine for one of the protagonists, Sunny (Kuhoo Verma, in a breakout performance), involves settling back into bed, turning her pet elephant away from her, and pleasuring herself to an anatomical caveman from the pages of her science textbook.

It’s a brief, funny moment that lightly scandalizes a familiar structure. Accordingly, what follows this opener is a film — an impressive, considered debut from director Natalie Morales, who is known most for her acting career (series such as The Middleman and Parks and Recreation, along with the film Wall Street: Money Never Sleeps) — that manages to simultaneously be a capable entry into the teen movie canon, and also an utterly new, delicate subversion of the genre.

Plan B follows Sunny, a straight-laced Indian-American teen living in South Dakota, who at the outset has the daunting ambition, buoyed by encouragement from her best friend Lupe (Victoria Moroles, an admirable sidekick), the punkish daughter of a widowed pastor, to get laid. Her mom is out of town, they throw a party, there is a makeover, and clumsy, unexpected sex is eventually had. This well-worn trajectory, though, makes up only the first quarter or so of the movie. The morning after, Sunny realizes the condom used by her sexual partner, a hapless God-loving dweeb, was not used properly. The rest of the movie becomes a teen quest, focused less on the fun and cringe of a sex comedy, and more on the many (still very fun) misadventures Sunny and Lupe are forced to go through in order to obtain a morning-after pill.

The teenage girl buddy quest premise is likely what will result in endless comparisons to Booksmart, the groundbreaking high school comedy from 2019 that it does in some ways follow in the footsteps of. “Can you think of another R-rated teen comedy with two girls as the lead?” Morales recently asked me. “No, you can’t. Because there aren’t any. So it’s obviously going to be compared to the only other one there is.”

The more revealing comparison for Plan B, though, is likely Superbad, one of those beloved teen dude films that served as an influence for Morales. In their frank, crude treatment of sex that is undergirded by adolescent naïveté, both films offer an irreverent take on the coming-of-age experience that feels truer to actual teenage life. On this surface level, Plan B feels immediately separate for centering that kind of story, in all its youthful raunchiness, on two female characters.

“There’s a big misconception that teenage girls aren’t thinking about (sex), when they are,” Morales says. “I like the very real and sometimes crass conversations (Sunny and Lupe) had about it because those are the conversations I had with my friends when I was a teenager.”

Yet, in its most graphic and vulgar moments, Plan B plays at absurdity more than anything — the film rather shrewdly manages to be about teenage sex, without sexualizing teens. “There’s no female nudity really or any kind of sexualization necessarily, which was always so fucking weird with high school movies,” Verma said. “These are young girls. They’re 17-year-old children. Unless it’s only going to be high schoolers watching this movie, what are you trying to say about these girls?” Verma and Moroles both noted that in more sexually intimate scenes, the environment was sensitively considered among everyone on-set. “I don’t know if that would’ve happened with a male director,” Moroles says in praising Morales. “I don’t think so.”

More remarkable, though, is how this shift to the female gaze in Plan B gestures toward the insidious, lopsided power dynamics always at play as young women come to terms with their sexualities. Superbad was rightfully touted as groundbreaking for what was, in fact, an accurate depiction of pubescence — this is what actual dumb, horny teen guys talk and think like! In recent years, its tone, perhaps seen in retrospect as more dangerous for reinforcing what is accurate, often feels queasy in its overt objectification of girls: those teenage boys grow up to be men, and that talk doesn’t always graduate to higher understandings of human relationships — it can instead mutate into much darker manifestations of misogyny.

On the other hand, even in its horniness, Plan B is persistently and quietly observant of how sexual awakening often feels like a trap weaponized against young women. Early on, Sunny and Lupe watch a low-budget abstinence video in class, in which a thinly veiled car metaphor puts the onus on the girl to avoid pre-martial sex, lest she taint her purity. When Sunny does indeed lose her virginity and has her pregnancy scare, even without asking her sexual partner Kyle (who might as well be a literal personification of a Puritanical America) for help, it goes without saying that she is on her own in this predicament. Indeed, at the end of the film, Kyle is blissfully unaware of the actual ramifications of their hookup, and instead hand-wringing over whether God will forgive them. Most notably, the engine of the film is set in motion because the local pharmacist refuses the contraceptive care by invoking the conscience clause, a legal right in some states like South Dakota for medical practitioners to deny health care care on personal moral grounds. The morning-after pill, Morales noted, is a literal contraceptive, not an abortive — a fact that she has come to realize many people are unaware of and likely a sign of America’s stunted sexual education.

Joining the likes of last year’s queer teen romcom The Half Of It, the small-town setting of Plan B, Morales and Verma noted, offers another slight genre-revision: the worlds of Booksmart, Superbad, and the like project a white, upper class vision of adolescence that would likely be unencumbered by the ordeal Sunny and Lupe find themselves in. Here, the duo are forced to hang their hopes on a Planned Parenthood hours away that (spoiler alert) they eventually realize has closed its doors: indicative of a larger political reality that is communicated through a grim series of shots observing its empty hallways inside.

Yet this scene, near the end, is the film at its most grave. For all its more enlightened politics, Plan B is perhaps most successful for its restraint. Morales is consistently understated where many within the wave of “diverse” projects coming from streamers are not. It’s specific and funny when it should be (a running “Indian mafia” gag serves as a hilarious, culturally specific inside joke), and controlled in its sentimentality when it is serious: when Sunny finally admits everything to her mother, rather than taking some righteous forgiving stand, the loving, but stern matriarch simply gets her the pill, smilingly telling the Indian pharmacist it’s for her “daughter’s friend.”

“I think that we need to tell stories about marginalized people that are not only about how they are marginalized,” Morales tells me. Striking this balanced tone, she says, was less a matter of a consciously calibrated approach, but perhaps a reflection of the shared experiences and sensibilities of its cast and crew, from Morales herself, a queer woman of color, to its non-white female stars and Indian-American co-writer. The achievement of Plan B is that it manages to so deftly inhabit two worlds. Draped in its beloved tropes and often lowbrow teenage antics, it’s the kind of fun cinematic ride we’ve all been on before, until it isn’t. “I want you to go, ‘Oh my god, these girls shouldn’t have had to go through any of this’,” Morales says. “And you only realize it when they do — when they’re stuck in this moment where this country and this medical system and the people around them have failed them.”