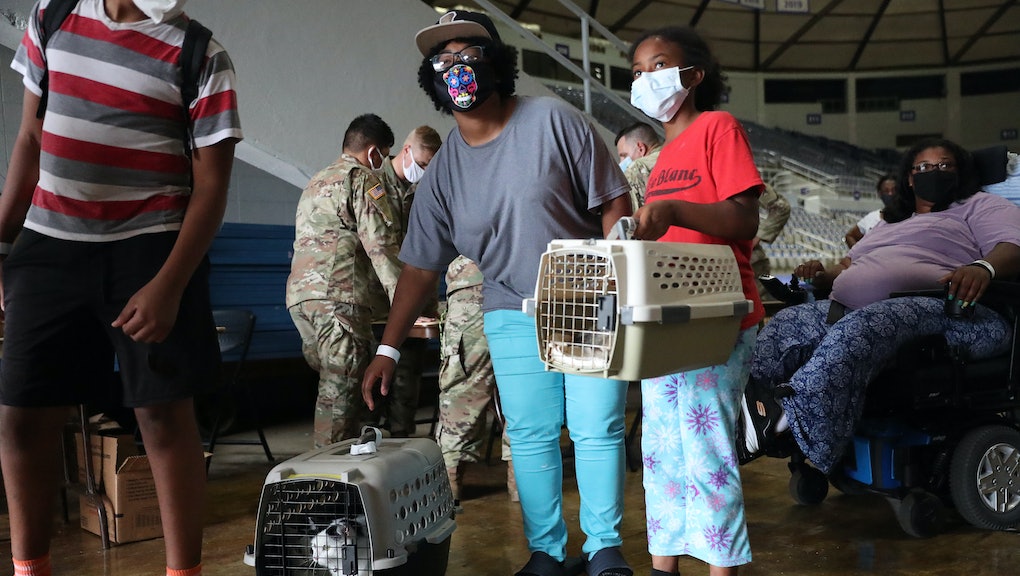 Hurricane Laura is coming at the worst possible time

Over half a million residents in Louisiana and Texas are being told to evacuate from the path of Hurricane Laura, a Category 4 storm currently barreling toward the Gulf Coast. The hurricane started as a tropical storm that hammered the Caribbean, but due to a weather phenomenon called “rapid intensification,” Laura quickly gained enough speed and strength to grow from a storm into a Category 3 hurricane within a day.

It has continued increasing its strength, reaching Category 4 on Wednesday, and is expected to land on the border between Louisiana and Texas around midnight to 1 AM, Thursday.

Hurricane Laura is no joke. The National Hurricane Center (NHC) describes a Category 4 hurricane as a storm with winds reaching speeds up to 130-156 miles per hour. With winds going that fast, homes might see “major damage or removal” of roofs and walls, as well as multiple uprooted trees and power lines. Residents should also expect power outages and water shortages that could last weeks to months, as well as a risk from being isolated from help. The NHC cautions that the affected area could be “uninhabitable” during that time.

There are also storm surge warnings along the coast. The surge could push water up to 30 miles inland according to the NHC, causing flooding as deep as 15-20 feet in some areas. The situation is expected to become “life-threatening” and “unsurvivable.”

It usually takes days for a storm to increase in ferocity like this. However, a combination of warm ocean waters, calm winds, and thunderstorms created an environment that allowed Laura to brew and grow within a day — a process called rapid intensification.

Orders to evacuate have become complicated due to the pandemic that is now lurking in the background of everything we do. Officials are asking people to find family or friends to stay with beforehand to avoid crowding into shelters where Covid-19 could spread.

A model study on emergency evacuation scenarios released this month predicted that they could become superspreader events for the virus, which would be a strain on an already burdened system. Texas has reported over 586,000 cases of coronavirus and Louisiana has reported over 144,000.

“In every scenario we analyzed, hurricane evacuations cause an increase in the number of COVID-19 cases,” Kristy Dahl, co-author of the study, told Newsweek. To minimize the spread, officials are urging people who are able to hunker down with friends or family instead of crowding into shelters.

Still, the messaging has been confusing for some residents. In at least one instance, a shelter issued hotel vouchers to people to keep them from gathering in one location, but then turned evacuees away once the vouchers ran out, telling them to find their own hotel rooms or travel to larger cities, like Dallas, for shelter.

Having enough cash for a hotel room also might be an issue for residents in places like Port Arthur, Texas, where 30 percent of the population is below the poverty line. And the problem has only gotten worse as layoffs continued during the pandemic.

The mayor of Port Arthur, however, doesn't seem too sympathetic. “If you decide to stay, you are on your own,” said Mayor Thurman Bill Bartie during a press conference. “I will not put my people in harm’s way. If you stay, it is you and God.”

Hurricane Laura has already killed 23 people as a tropical storm in the Caribbean. Its path is predicted to swerve further into the continental U.S., reaching Kentucky and Tennessee by 1 AM on Saturday. Meteorologists are already warning that the storm could cause flash flooding within the affected states, which means landfall on the coast might be just the beginning of what Laura has in store.

More like this
Texas officials responded to the winter storm with propaganda they got from a pro-fossil fuel think tank
By AJ Dellinger
Biden's American Jobs Plan throws $2 trillion at America's crumbling infrastructure
By AJ Dellinger
"Brood X," a plague-level cicada infestation, is coming for us this spring
By Rafi Schwartz
Stay up to date